Kpop Female Idols That Made The World Go Gaga Over Their Visuals This Year!

Each one of them is insaly beautiful and talented! 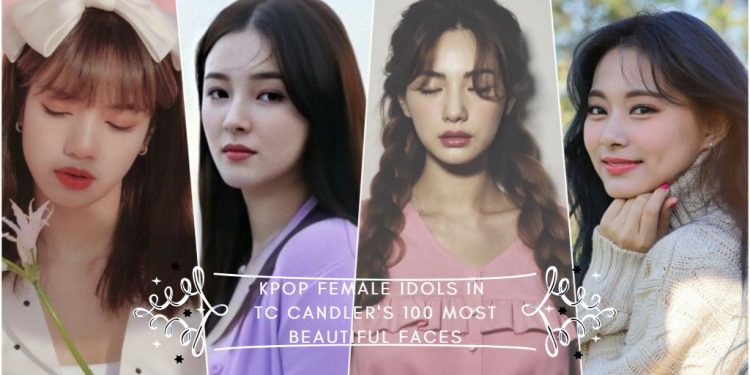 Be it a kpop fan or not, fans around the world wait for TC Candler’s ‘100 Most Beautiful Faces’ list every year! If you didn’t know bout this list till now, let us break it to you that you have been missing out on a lot. Every year TC Candler comes out with a list of the most beautiful faces of that particular year. They select the queen of the list according to how popular they are in terms of their beauty. From Emma Watson to Emilia Clarke to Liza Soberano, many gorgeous and powerful women have graced the list. And ever since the K-wave has hit the wild, kpop female idols have also been dominating the list. But the real question is, why wouldn’t they, though?

There is no doubt that the kpop industry is filled with female idols who have heavenly visuals. Not only are they out-of-the-world beautiful, but they are also insanely talented. Not to be exaggerating, most of them are triple threats. While hitting high notes, rapping faster than a cheetah, and not missing a beat when they manage to look effortlessly pretty. Now without further ado, check out the kpop female idols who reached the top 50 of TC Candler’s ‘100 Most Beautiful Faces of 2021’.

Starting off with Twice’s fake maknae and unnie Nayeon, the kpop female idol came on the 5th position on TC Candler’s 100 Most Beautiful Faces Of 2021. Nayeon had been collecting hearts with our bunny smile and lovely cheeks. No one, we repeat, no one is immune to her aegyo. Her youthful beauty wouldn’t make you even think that she is the eldest in her group!

Next up is the rising soloist Somi who had secured the 47th position under her. Somi has endless good genes in her, so you can see where all this beauty is coming from. The female soloist is taking over the kpop industry with her awesome vocals and fiery stage presence. She is also known for being the first place winner of the survival program IOI. Even then, people had been praising Somi’s unbelievably delightful visuals!

The soloist queen Chungha had taken over the 48th position marking it the 2nd time that she has appeared on this list. This former IOI member is known for being an all-rounder. If you give even one of her songs, a listen then you’ll see why people have been crazy about her. Also, don’t forget that she isn’t a real cat!

Kim Chaewon had named the 48th position on the list as hers. She shoots straight for our hearts with her aegyo and cute and innocent face. Korean’s love her small and pointy nose and have adored her v-shaped jaw. Other than stealing our hearts with her cuteness, Chaewon is also a very good vocalist!

Purple Kiss’ Yuki had made a new entrance in TC Candler’s 100 Most Beautiful Faces Of 2021. The kpop idol is known for her vampire-like visuals. Her main beauty points could be her cat-shaped eyes and high and slim nose bridge. Fans all around the world had fallen in love with her ever since she debuted with Purple Kiss this year. It is surprising and incredible how fast her fanbase grew in such a short time!

The kpop female idol that took over the 38th position was none other than Aespa’s Ningning. The powerful vocalist instantly became popular not only for her talents but also for her visuals. Many compare her visuals to the likes of Blackpink’s Jennie and (G)I-dle’s Minnie. You can’t deny that the similarities are uncanny! Ningning can radiate a powerful aura as well as cutesy one at the same time. Plus, how can someone of her age be this talented. Her high notes in Aespa’s Savage were something that we didn’t know that we needed.

Next up is ITZY’s dancing machine Chaeryoung. Chaeryoung has given her haters a hard kick by coming in the 34th place on TC Candler’s ‘100 Most Beautiful Most Faces’ list. In the past, Chaeyoun had been hated for not fitting the Korean Beauty Standards, so fans have been happy that the talented kpop female idol has proven that she can be beautiful in her own way. Chaeryoung’s fans can’t rest on how beautiful she is and praise her unique beauty.

Coming on the 30th place, Jennie proves that she isn’t called the human Chanel for nothing. She has been collecting admirers for her cute as well as charismatic charms. It is a world-renowned mystery that how Jennie could look so adorable yet fierce at the same time. The kpop idol is also one of the most famous fashion icons of the industry. Jennie knows what’s in the trend but can also start a trend, for example, the hair clip trend that she started. Jennie has proved over and over again that she is a stylish mandukie!

Sorn had secured the 28th position due to her natural beauty. Appearing on the list for the 3rd time, Sorn has proven yet again that she is a gorgeous queen. Sorn can turn from an ice queen to a cute teddy in a matter of minutes. Her small face and dainty body figure are what many of us want! Many people think that her visuals stand out a lot, and we are one of them!

On the 26th place is Blackpinks’s Dior Queen Jisoo! This year has her third round in TC Candler’s 100 Most Beautiful Faces of 2021. As already mentioned, Jisoo is one of the most legendary visuals of kpop. She is a very elegant and graceful aura to her beauty. We fell in love with Jisoo at first sight when the video of her breathing went viral (Not shocked!). She has proved that she is really talented as she is beautiful. The kpop female idol has recently bagged the main role of Disney+‘s Snowdrop. Time and time again, Jisoo has proved that people are head over heels for her!

Next up is the shy, shy, shy queen of Twice Sana. The kpop idol had made it to the 24th place this year and made her 5th year. Sana’s visuals are like something that a Disney princess would have. We wouldn’t be surprised if she acted us one of the Disney princesses! Sana has this luxurious and royal vibe that would make you mistake her for royalty! Other than that, she has adorable squishy cheeks that add an extra point to her already magnificent face!

Next up is (G)I-dle’s Lead dancer Yuqi made it to the list in the 22nd place. Plus, this is her second time appearing on it. Yuqi is known for her soft and innocent visuals that make us check once again if she is real! Nevertheless, you shouldn’t underestimate her cute visuals because her voice can throw you off the track. Yuqi has one of the most beautiful and deepest voices in the South Korean industry. Her voice is just one of the unique charms that Yuqi has. Honestly, her voice and visuals make us go, ‘Oh My God.’

Oh My Girl’s dancing queen YooA had claimed the 20th spot on the list of the most beautiful places. This is the fourth time that the talented and skilled kpop idol has appeared on the list. YooA has been famous for doll-like visuals and endless legs. It isn’t surprising that the dancing queen had entered this list. You wouldn’t realize at first glance that she is a real human being and not a human-sized doll. All the barbies are noted in front of YooA!

Blackpink’s main vocalist, Rosé, made it to the list on the 17th position. The kpop female idol has been on this list for three years, and it looks like Rosé isn’t coming down any soon. The kpop female idol had made her solo debut in the first quarter of this year. Unsupsringly, her singles On The Ground and Gone, along with great music, Rosé had also served true visual goals. Her visuals literally had us on the ground! In addition to that, fans think that the amazing vocalist won’t be gone from the list for a long time!

Coming on the 13th place is Red Velvet’s main dancer Seulgi. Seulgi has a nag for smoothly entering our hearts with her smooth dance moves. Let’s not lie that all of us can spend our hold day watching her perform on stage! So it must be no surprise that Seulgi was one of the top runner-ups for TC Candler’s 100 Most Beautiful Faces of 2021. Her fierce eyes and charisma got us feeling like a Psycho…! Fun fact: If Seulgi was a country, then the flag would be orange. That is because the female idol’s favorite color is orange, and her love for the color has also been showcased in the captions in TC Candler’s 100 Most Beautiful Faces of 2021.

Unsurprisingly, former After School’s member Im Jin Ah, aka Nana, made it to the top 10 of this list. This year, she bagged the 9th position on the list. Nana is a renowned face when it comes to TC Candler’s 100 Most Beautiful Faces lists as she had topped the list in the years 2014 and 2015. But if that wasn’t enough, she has also been named as the face of the decade by TC Candler. We can see why she is everyone’s favorite! Her sharp facial features and perfect bodyline will make you go ‘wow’. You wouldn’t realize that the kpop singer is 30 years old! The 2nd generation kpop idol stills keeps making headlines for her visuals!

Next up is Twice’s maknae, Tzuyu! Tzuyu made heads turn when she debuted along with the members of Twice in the year 2015. Since then, she has appeared in TC Candler’s 100 Most Beautiful faces lists seven times! Naturally, fans of the talented kpop idol couldn’t help but laugh over the caption TC candler gave her ‘The real maknae’. Plus, she was also crowned the most beautiful face of 2019 by TC Candler. Her slim and flawless body will make you want to hit the gym right away. However, people have also fallen in love with her cure and savage personality too. We know that you fancy her!

Next up is Momoland’s Nancy, who came 5th on TC Candler’s 100 Most Beautiful Faces Of 2021. This isn’t her first time appearing on this list either and is actually her fourth time. Over the years, Momoland’s maknae has gained attention for her perfect visuals. There is no doubting that Nancy is one of the prettiest faces of the pop industry. With her hourglass figure and refreshing beauty, no one can deny that she is extremely beautiful. Surely, Nancy makes everyone’s heart go ‘BBoom, BBoom..’!

Blackpinks’ maknae Lisa has topped the list Of TC Candler’s 100 Most Beautiful Faces of 2021. This is the third time that a female kpop idol has won the crown of the most beautiful face. With her unbelievable perfect body proportions, doe eyes, and high nose bridge, Lisa naturally danced into the hearts of many people.

Plus, this is the 6th year the talented female kpop idol has appeared on the list! Lisa has been taking over the world this year. Making her solo debut this year, her songs Lalisa and Money have taken over the charts as well as social media. You can’t go anywhere on social media without coming across ”Dollar bills, Dollar Bills…….”. It looks like the whole world took the lyrics ‘Say Lalisa Love Me’ seriously!