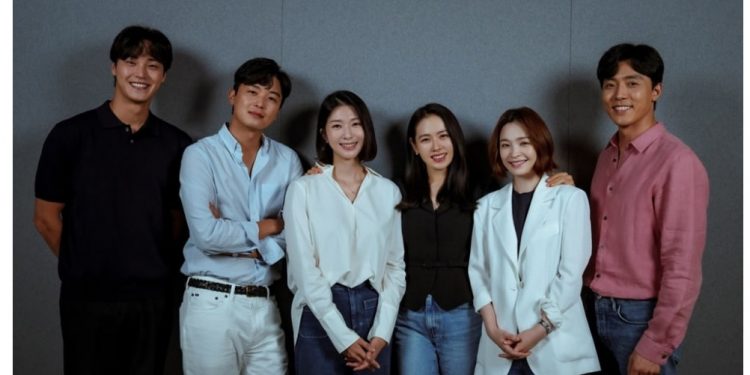 Calling up the cast members of the upcoming k-drama ‘Thirty-Nine’ together for a session of script reading, JTBC has taken a step further to the release. And to make the fans more excited, the channel has also revealed some pictures and teasers from the session. The upcoming drama ‘Thirty-Nine’ is based on some life-long friendships. Following three friends who met in their second year of high school as they are now turning 39. With just one year left until they turn 40, the k-drama will tell the emotional everyday stories of three 39-year-old women as they come upon unforeseen circumstances in their lives.

The script reading session was attended by producer Sang Ho Kim, director Kim Sang Ho and writer Yoo Young Ah from the production team of k-drama ‘Thirty-Nine’ while cast members Son Ye Jin, Jeon Mi Do, Kim Ji Hyun, Yeon Woo Jin, Lee Moo Saeng, and Lee Tae Hwan were the most important guests at the session. Following the covid-19 precautions, the actors and the heads took their seats and began the event. With each actor mending into their characters as they read their respective scripts. The session ended as a huge success for everybody and fulfilled the purpose.

The Cast and The Characters Of The K-drama’ Thirty-Nine’

Son Ye Jin will be playing the role of Cha Mi Jo, the head dermatologist of a clinic in Gangnam. While Jeon Mi Do will take over the role of Jung Chan Young. An acting teacher who previously dreamed of becoming an actress but now is limited to the classes. Kim Ji Hyun will be playing the role of Jang Joo Hee, a department store cosmetics manager. Reading up their scripts, the three actresses showcased natural chemistry and affection. The reading session brought tears to the eyes of many present in the room as Ye Jin, Mi Do, and Ji Hyun showed the close friendship of their characters without even trying too hard. The hardships of the characters could be easily felt through their voice. As Ye Jin presented Cha Mi Jo’s wisdom and warmth, Ji Hyun was playful, reading the lines of Jang Joo Hee. While Mi Do went on to present Jung Chan Young’s honest and outspoken nature.

On the other side, the male actors Yeon Woo Jin, Lee Moo Saeng, and Lee Tae Hwan were there to create some romantic tension in the room and the k-drama. Yeon Woo Jin will be playing the role of Kim Sun Woo, a dermatologist who works at the same hospital as Cha Mi Jo. Having sweet and thoughtful charms and his pure love for one woman, Woo Jin made everybody’s heart flutter. Lee Moo Saeng took over the role of Kim Jin Seok, the CEO of Champ Entertainment. Moo Saeng was able to easily pull of Jin Seok’s seriousness and as well as be emotional with Jeon Mi Do. Lee Tae Hwan plays the role of Park Hyun Joon, who is the CEO and chef of China Town. He also showed his refreshing chemistry with Kim Ji Hyun.

Fans Have A Lot Of Expectations…

With the k-drama ‘Thirty-Nine’ focusing on not one but three women together. The fans have a lot of expectations from ‘Thirty Nine’. In a video shared by JTBC, the actors have shared their views as the viewers get a looking inside the reading session. In the video, we see the actors introducing themselves along with a character sketch of the characters. From their lifestyle to quirks, we get to know about everything. As the script reading goes on, we see the actors getting in their forms. Flirting and getting playful with each other as they get more into their characters. By the end of the session, the actors went on to get some pictures clicked to share with the fans. And to remember the lovely day they just had. With all the actresses actually being 39 years old, there were a lot of jokes going around in the room.