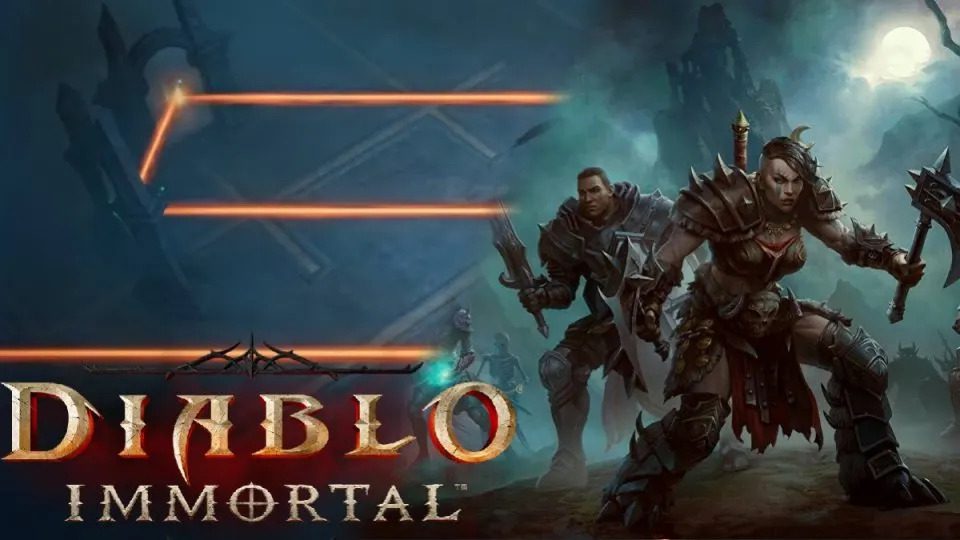 Players are returning to the classic Diablo’s location of Paradise now that Diablo Immortal is released. Because the game is primarily intended to be played on a mobile device, it differs from prior Diablo games in terms of gameplay. The main gameplay formula, though, is still in place. This means you’ll be fighting swarms of demons, collecting gold and loot, gaining XP, and completing tasks. However, one quest, in particular, is causing gamers problems. We’re speaking about The Diablo Immortal Mirror Puzzle from the Lost Runes quest. We’ll show you how to solve The Diablo Immortal Mirror Puzzle in this article.

Immortal is the fifth installment in the Diablo series, and it takes place in the land of Sanctuary, five years after the incident of Diablo II but before Diablo III. The players begin their journey in Wortham, which is under siege by cults and the undead. They understand from frequent Diablo personality Deckard Cain that they should seek and destroy pieces of the Worldstone across Sanctuary’s planet in order to stop a world-threatening tragedy orchestrated by Skarn, the “Lord of Damnation,” the game’s initial enemy. 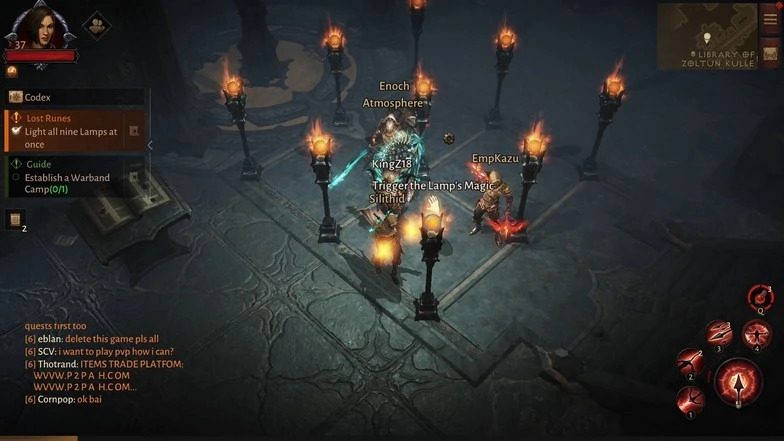 To complete the Diablo Immortal Lost runes puzzle, you must light all nine lamps at the same time. There are several possible solutions to this puzzle, and we’ll go over one of them with you. When you pick a lamp, it will be lit, and a flame will be sent to the pillars. Keep in mind that the flame will be directed toward the pillars nearest to the lamp you chose. It will not solve the riddle for you if you try to light the bulbs at random. To solve this puzzle, you’ll need to stick to a pattern. The idea is simple and straightforward. All you have to do now is turn on the lamps in each of the four corners. After that, turn on the lamp in the center, and that’s all there is to it.

The second lost rune is straightforward. If you follow Diablo Immortal’s outstanding quest navigation system, you’ll end up facing a slew of enemies, including a challenging epic monster. The second lost rune will drop once you defeat the opponent, and you can collect it right away. If you’re having trouble beating adversaries, look at your fighting rating to see if your rating or equipment is too low.

The player would have been charged with visiting the Mirror World after gathering two runes throughout Diablo Immortal’s Lost Runes mission. The Sanctuary, according to the Curator, is mirrored in the Mirrored World. It’s unclear whether this reality exists inside or outside the mirror. Look for a mirror in Zoltun Kulle’s Library to find this portal. Magic exists in the Mirrored Planet, although it appears to operate in a different way compared to this world. Hungering Echoes and other ghostly beings also reside there, aided by a rune taken from the Statue of Resurgence. The adventurer must solve the Mirror Puzzle in order to obtain the hidden rune in this reality. 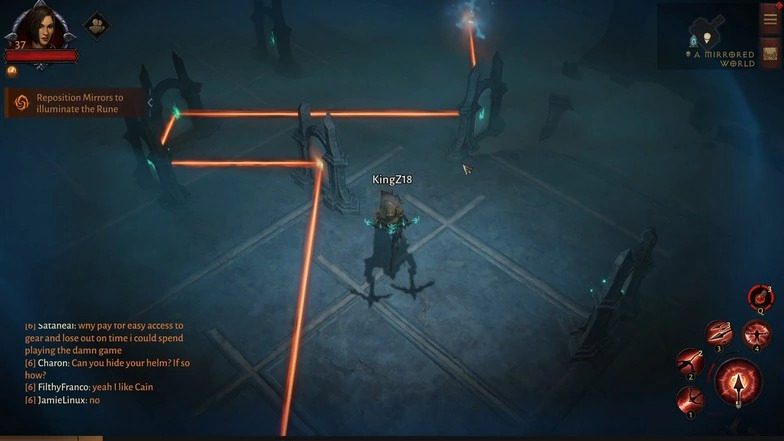 You must transmit the light beam from its original source to the cursed rune in order to complete the Diablo Immortal’s Mirrors Puzzle. The light will bounce off the mirrors in the room. By selecting these things, you can reposition them. Going to the body on the right side of the room, as shown in the image, is the simplest way to accomplish this task.

As an outcome, a blue rectangle will form on the surface around the mirrors. Adjust the mirrors to the indicated positions. Only the two mirrors in the middle, closest to the cursed rune, can be moved. Both of these mirrors should be pushed down. The left mirror will need to be pressed twice. The light will then realign, rebounding off the mirrors and hitting the cursed rune. You’ll be able to collect the rune after that. Be careful, since once that’s done, some ghosts will arrive. Return to the Curator and complete the objective by placing the third rune.