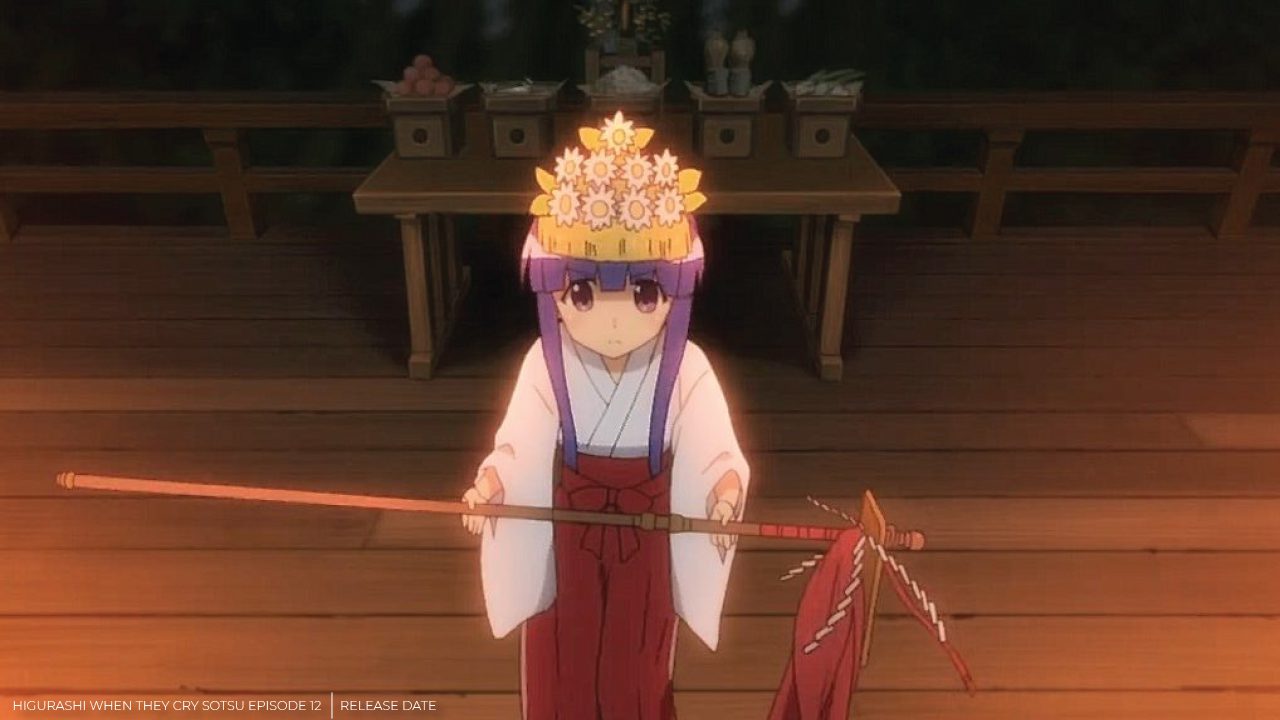 The Oyashiro mysteries begins with Higurashi: When They Cry SOTSU Episode 12, with Satoko using a bat to kill her uncle Teppei. This episode will arrive this coming Thursday. Higurashi When They Cry SOTSU reveals the truth behind the Hinamizawa Village and the Oyashiro-sam Curse. From the recent episode, Satoko continues to mislead the students and uncle Teppei. She came back home and killed Teppei using a baseball bat. Satoko continues to smash Teppei even though he is dead. She beats him until the blood spray all over the room.

Sakoto notices that she is covered with blood and decided to go to the shower. Unfortunately, Rika is at the entrance, and she is about to get inside the house. Satoko heard the doorbell and realizes that Rika has arrived at the right moment. She decided to get ready to put on an act. Satoko went out and met with Rika, who said she is here to pick her up. Satoko replies that she is ready since it is Watanagashi Festival today; Rika wonders if the house is dirty and asks if she can help her clean. Satoko replies that it is okay.

The two head out, and the Watanagashi Festival begins in the evening. This week, Teppei’s death is the third one since Mion has killed Shion and Rena has killed her father’s mistress. They are now in another fragment that Satoko reigns. At the festival, Satoko and Rika met with Keichi and the others. They wonder if Satoko is okay since they know that the uncle abuses her. Satoko told them that she is fine and nothing is wrong. Everyone is glad that the festival is lively and Satoko is happy.

Previously on Higurashi When They Cry SOTSU Episode 11

Shion is glad that they have Keichi on their side, and it is time for the Watanagashi Six-Demon Battle Royale. Mion comments that she won’t hold back, and Keichi said he is down for a battle even though he has no clue about it. Shion reveals that the rules of tonight are simple and whoever has the most fun wins. They both enjoy their games, and Rika wonders something about Satoko. The detect is also attending the festival, but he is not on duty. Rika performs the rights of Watanagshi Festival, and everyone is happy to see that.

Rika also dances while doing the ritual to purify the village. Hanyu is watching her from another world and pray that nothing bad should happen. During the ceremony, Satoko pulled Keichi and went to talk in private. Satoko told Keichi that she heard everything from Rika that he is working hard to help her get out of her abusive uncle. Satoko decided to call Keichi her brother, and Keichi accepts since she is insisting. Keichi wonders why Satoko is like this. Satoko gave him something that belonged to her brother.

The detective is spying on them, but he begins to feel itchy. The two went to Satoko’s house, and the detective is on their tail. Satoko told Keichi not to be a stranger, and he can enter since this is his house. Keichi enters and asks if her uncle got arrested. Satoko said yes, and it is only them inside the house. When he switches on the light, he saw blood, and Satoko uses the same bat to hit Keichi, Satoko killed Keichi, and the detective arrives and belive that Keichi brawl with Teppei, and they killed each other. Satoko shoots the detective and Rika.

Where To Watch Higurashi When They Cry SOTSU Episode 12

NHL 22: Release Date & All about the Exciting Game

Anime Like Seirei Gensouki That You Don’t Want To Miss!