Attack on Titan Season 4 Part 2 Episode 1 just premiered few hours ago, where we saw the most awaited rematch between Eren and Reiner. 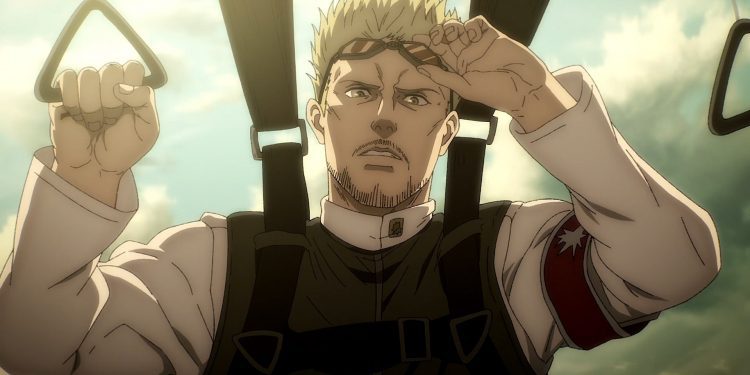 Attack on Titan Season 4 Part 2 picked up right where the first part left us. It wasted no time in jumping straight into the Marley vs. Paradis war that we all have been waiting for. Darkness fell upon Paradis, and the sky is covered with Masrleyan Airships instead of clouds. I bet that’s a scary view that the island dwellers have never witnessed before. The Wall that protected them from the outside world is no longer an effective barrier.

Adding salt to injury, the Marleyans have come up with enough firepower to bring the Founding Titan. The suddenness of such a huge-scale attack was beyond the expectations of Eren and Yelena. However, totally ignoring the odds, Eren invites Reiner for a one-on-one match. I am sure that he wants to end this fight once for all. Here’s everything that happened in Attack on Titan Season 4 Part 2 Episode 1.

While Hange and her squad were scouting the area to find Zeke, she heard the loud explosion. She immediately rushes to the site to find the heavily injured body of Captain Levi. The metal splinters badly shatter his face and arms. Hange immediately recognizes it as the wounds from a thunder spear and tries to treat them in whatever way possible. It was really heartbreaking to see the leaders of the Survey Corps in such an awful situation. Meanwhile, Zeke was going through a hard time just to keep himself alive. All his past memories start flashing right before his eyes till he finally comes across Ymir. Moments later, Zeke emerges from the titan corpse with his new body and claims that he has got much to do.

In the Shighanshina District, Reiner jumps out from his airship and transforms into the Armored Titan. He goes for Eren right away and engages him in an intense war. Some of us surely wanted the fight to go differently from the last time, but once again, Reiner got overpowered before Eren. It seems Eren has grown too strong to be contained by a single-handedly.

Porco tries Reiner with his Jaw Titan, but Eren crystalizes the entire area and traps them crustal spikes (War Hammer Titan’s signature move). Meanwhile, the Marleyan soldiers rain down from the airships and engage the Survey Corps from every direction. It wasn’t too long before the Yeagerists found themselves surrounded by their own lands. Things get even worse when Marleyans reveal their trump card, a titan-killing artillery installed in the back of the Cart Titan. She keeps sniping Eren from a distance, and one fatal hit can take away his life.

What to Expect from Episode 2?

In Episode 2, Eren will most likely find himself at a disadvantage for the first time in a while. That’s where Zeke’s role comes into play. The infamous Beast Titan will show up anytime soon to aid his brother from the Marleyan Invasion. Considering the way Beast Titan had slaughtered entire armies single-handedly, it will certainly be bad news for Marley. Then again, the Marleyans have worked with him for a long time; they must have a master plan to deal with the monster they created.

Meanwhile, the remaining members of the 104 training corps are still locked in the basements. They must be feeling helpless sitting inside the cell aimlessly. I wonder who will arrive to save them and bring them back to the battlegrounds. Moreover, which side will they pick? Will they assist the manic who intends to carry out the euthanasia plan? We have to look forward to the upcoming episodes to find that out. Stay tuned with Otakukart for the latest episode updates and theories that will completely change the way you see the series.