Angela knows who Dexter really is and wants to figure out what this all means amidst the murders taking place in the town in From The Official Promo For Dexter: New Blood Season 1 Episode 6. 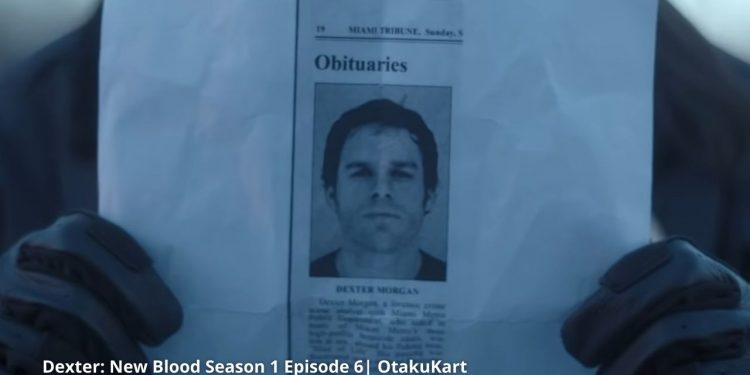 From The Official Promo For Dexter: New Blood Season 1 Episode 6

Dexter: New Blood Season 1 Episode 6 sees Angela confronting Dexter about who he really is. Well, she went all the way to New York to investigate another case. But came back with a far more sinister one when she finds out about the Bay Harbor Butcher case. Also the number of cases linked to it. For a reason or two, the dots connecting told her she knew where it was leading. It was all made obvious when she took one last look in the recent episode of Dexter: New Blood Season 1.

Meanwhile, we saw Kurt making a mistake as one of his kills didn’t go the way he planned. Towards the end, he crossed paths with someone who was not in his right mind. Talking about the same, Harrison on his side is hiding a lot of things from his father as he is enjoying the fame he received at his school. All Dexter wants is to be a good father but that has led him to all the wrong places. Also note, probably there is someone else out there who knows about Dexter too. Here is a look at what went down recently.

Previously on Dexter: New Blood, we saw Dexter confronting Harrison about his knife. He questions him about Ethan’s incident and asks him for some trust. Harrison on his side questions about his fake identity when it comes to trust. Angela and Molly are on their way to New York to chase Matt and his credit cards as directed by Kurt. Then Kurt who is himself a serial killer on his side gives Chloe a comfortable room she was looking for. All he needs is a pay forward from her. This was all okay until she found the cameras.

After the arguement with his father, Dexter ends up at a kill list party. He receives pills from a number of kids and it was a matter of time he started losing his mind. Luckily Audrey was around to comfort him but as Harrison was passing out he blurted a few secrets about his dad. Dexter wanted to chase this kid who gave him the black market pills in the first place. Throughout the episode, Deb tried to guide him to be a better father but it seems like Dexter didn’t want to listen.

As this all went down, in New York, Angela and Molly found out that someone else was cashing in with Matt’s credit cards. Before they leave, the stopped by a conference of missing persons and met Angel Bautista. He talked about the Bay Harbor Butcher case, Deb and also Trinity case. He gives quite a guidance to Angela and asks her to go with her gut. Before walking away, he gives away Harrison’s name.

Coming to Dexter again, he did chase the kid but Logan interrupted. Dexter managed to hear the name of the person who makes this pills. Dexter later ends up killing the supploer, making it look like the supplier overdosed. Chloe went out of the way to escape and kill Kurt but in the end Kurt had to go through some plan changes and unexpectedly killed her. The episode came to a close with Kurt offering Harrison a job. Angela returning to find out what went down with Harrison. Lastly, we realize Angela is connecting dots and she gets Dexter’s Orbituary from the computer.

Dexter: New Blood Season 1 Episode 6 is releasing on 12 December 2021. It is titled,”Too Many Tuna Sandwiches”. The official synopsis of the episode suggests someone out there knows Jim Lindsay’s identity. We are not sure if its specifically about Angela, it seems like she is the only one who knows at this point. The official promo also sees her confronting him about the same.

The same discovery of identity leads Dexter to realize that he isn’t the only one killer in the town. So Angela could corner him or team up with him if she wants to take down the killer who is killing young girls. The killer as in Kurt seems to recruited Harrison. Are they working together or will Harrison find out Kurt’s secret as well. The synopsis also mentions of Harrison struggling in a wrestling match at school. Check out the official promo for Dexter: New Blood Season 1 Episode 6 below.