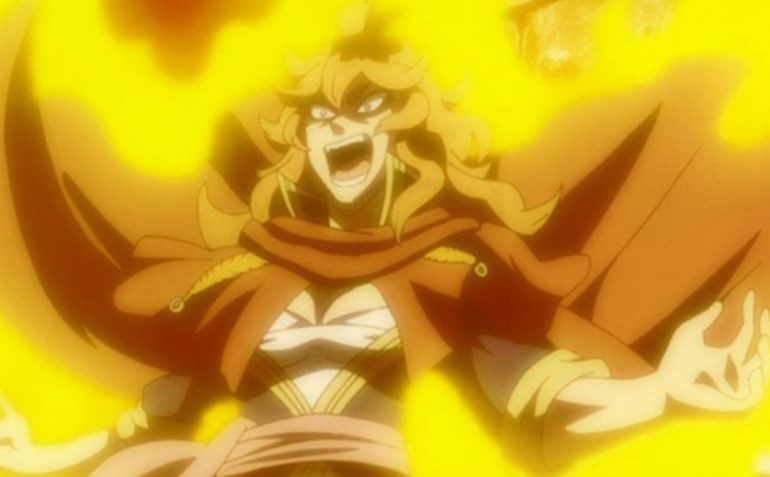 From the latest development of Black Clover, Natch leads the way to the enemy’s territory. He unleashes Shadow Magic: Shadow Corridor opening the path that will lead them to their enemies. They both reach the Spade Kingdom and they have been noticed. The Spade Kingdom people refuse to acknowledge the magic Knights as their rulers. Natch told everyone to stick to their plan and Vetto said that he will create the diversion for the Magic Knights even if it cost his life.

The legendary ancient demon emerges. Zenon is watching everything that is happening inside the Spade Kingdom. He said that no one thought that the Magic Knights would appear to be strong and bold. He announces for the Ritual of the Advent of Qliphoth to begin. The battle has begun between the Magic Knights and the devils of the Spade Kingdom. The battle continues below after the weekly schedule of this manga.

Black Clover Chapter 276 will be released on Sunday, 20 December 2020. The spoiler of the upcoming chapter is not yet released. A new chapter of this manga is released every Sunday. Take a look at the recap and official ways to read the latest chapters of this Manga.

The battle has begun at the Spade Kingdom Asta has been left back to finish with his training with Liebe. The selected Magic Knights have invaded the Spade Kingdom cause chaos. Zenon has noticed that they have company and ordered for the ritual of the Advent to begin. The ritual of the Advent is a large magical circle which is powered by four functions. The three Dark Triad and two beings in the middle are acting as a single object for experiment in the center.

In the middle of the circle, there is Yami and William around the circle there is Zenon, Vanica, and Dante. The three Dark Triad will activate the ritual. Yuno, Langris, and Zenon are inside the castle thinking about how they are going to destroy the Qliphoth. They think that is not guaranteed that the Qliphoth can be destroyed only by Anti-magic. They also realize that if they try to use force they might put the life of Yami and William in danger.

Charlotte won’t forgive the Magic Knights if they act recklessly and cause Yami and William’s death. The Triad is in different spots on the perimeter of the magic circle. The Magic Knights are planning to destroy the tree of Qliphoth without hurting the two brigade captains. The Magic Knights decided to split into three groups and take down their enemies. When they advance forward in a group of three they encounter the Dark Disciple who signals that there are intruders.

In each group, one of them will act as a decoy and clash with the Dark Disciple while others advance forward. Meanwhile, outside the castle, Mereolona is clashing with the ancient demon outside. Other heroes who are outside with her think that it is impossible to defeat such a powerful monster. Mereolona remembers that there were things that her magic wouldn’t work on. But during her training, she has learned something new. she remembers the first day when she met with Natch and she was nacked.

Natch smiles and looks away telling her to put on clothes and said that she is astounding as the rumors say. Mereolona asks him his real identity and what does he want. Natch reveals his name and that he is the vice-captain of the Black Bull squad. Natch reveals about the kidnapping of Yami and William Vengeance and she couldn’t care less about them. She is just worried about the people that have kidnaped them.

That day Natch told her that he will give her the opponent that gauges the results of her training. Back to the present, she realizes that Natch was right and it showed her that she could still get stronger. Mereolona said that she will burn everything with flame magic and it will be fine. The monster roars at it try to squeeze her with one hand. Mereolona unleashed phenomenal magic: Hell Fire Incarnate and said that she will defeat a legend.

People around her thinks that her body is like it has become mana. She started to incinerate the monster and landing powerful uppercuts that shaken the monster. She started burning the monster to hell, kicking it and attacking with a barrage of punches. She decided to send the monster to go back to its deep slumber. She unleashes a special move called Calodos Branchium Purgatory: Abss that make her mana zone full release.

She started to burn the monster to ashes and it shocked the people who didn’t believe that she can do it. Meanwhile, the Magic Knights have managed to reach where Zenon is. Jack the Ripper is glad to see the Dark Triad. Charlotte yells stop right there and Zenon looks back at her. Yuno is angry looking at the Dark Triad. The real battle is about to begin it is going to be Vanica versus Charlotte and Rill. Zenon versus Yuno and Langris, Dante versus Jack and Nacht. The Magic Knights are wearing robes that will be advantageous when they battle.

Read the latest chapter of Black Clover officially available on VIZ Media and Shueisha’s Manga plus official platforms. Raw scans for new chapters are released 2-3 days before their respective chapters are published. To support the Manga creators and publishers, we advise you to read the digital copies from their official websites and apps.