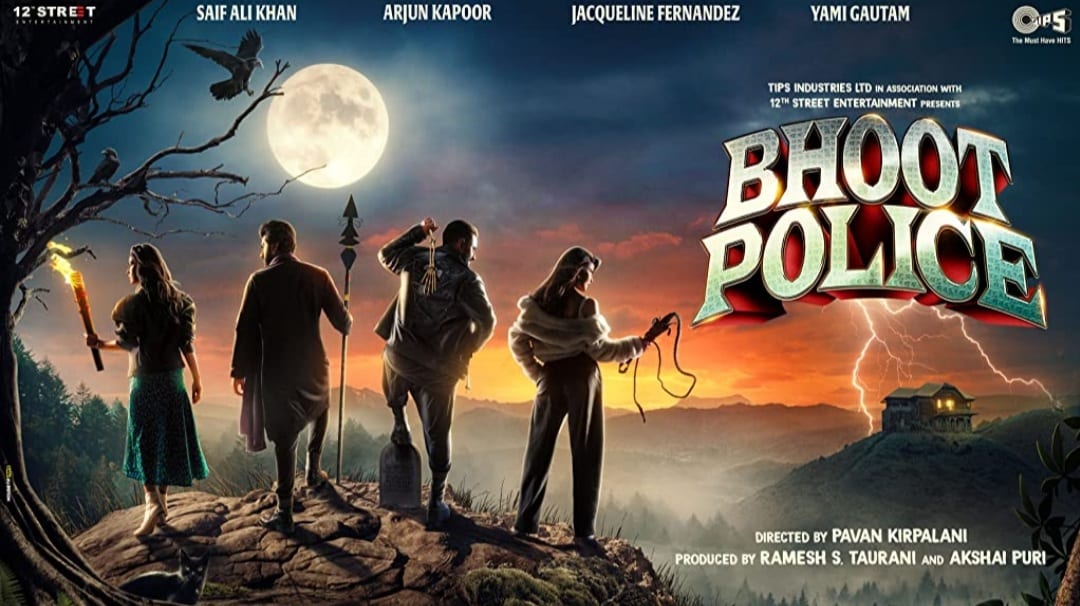 Bhoot Police is an upcoming Indian Hindi-language horror comedy starring Saif Ali Khan and Arjun Kapoor. Helmed by Pavan Kriplani, the film is produced by Ramesh Taurani and Akshay Puri. Apart from Saif and Arjun, the film also stars Jacqueline Fernandez, Yami Gautam, and Javed Jaffery in the lead roles. The film is going to have a digital release, on the Disney+ Hotstar OTT platform. Jaya Krishna Gummadi has helmed the cinematography. The film is a co-production between Tips Industries and 12 Street Entertainment. The principal photography for the film began in November 2020 in Dharmashala. From all the early looks and posters so far, the film seems to be a campy horror-comedy affair. Saif Ali Khan’s outfit in some of the sneak peeks promises a combination of quirky and spooky. Read on to learn more about Bhoot Police release date, cast, and other details.

The film stars Saif Ali Khan in the lead role, playing Vibhooti, a wacky ghostbuster, as the posters suggest. Arjun Kapoor will be playing the role of Chiraunji. Jacqueline Fernandez also features in the cast. Yami Gautam and Javed Jaffery play other prominent roles in the film. Nazeera Khan plays the role of Harleen Sahani. Back when the film was announced in 2019, the cast was going to look a bit different. Ali Fazal and Fatima Sana Sheikh were to be a part of the cast as per the initial plans. However, the filming eventually got postponed, and Fox Star Studios backed off from the project. Following that, Ramesh Taurani and Akshay Puri picked up the project. The cast saw a big change as Arjun Kapoor, Jacqueline Fernandez, Yami Gautam, and Javed Jaffery joined in. The only member returning from the original cast was Saif Ali Khan. 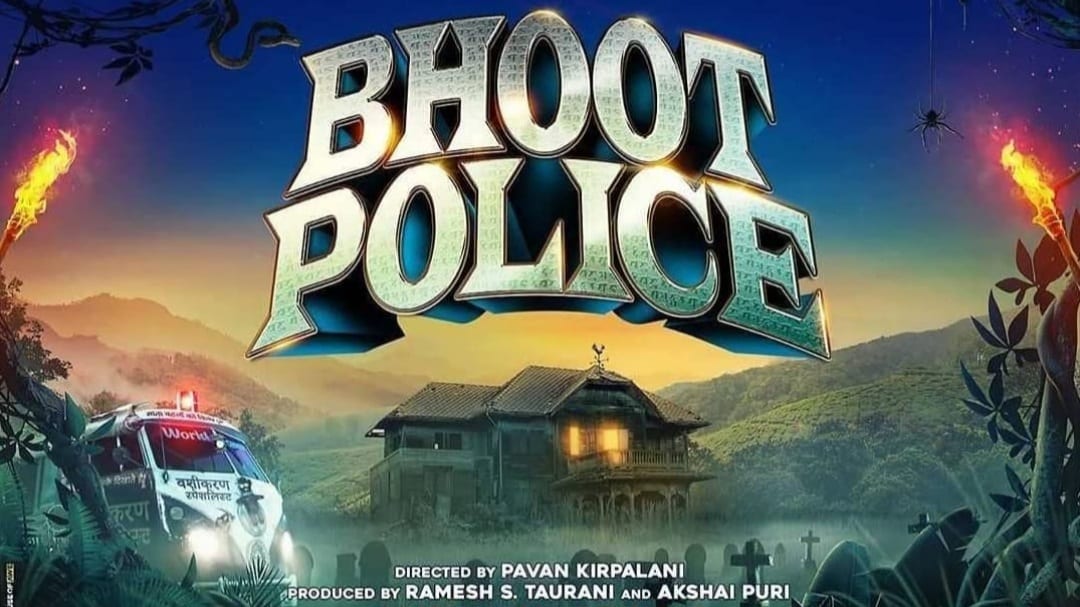 What Is The Film Going To Be About?

The plot of Bhoot Police is still in the mist as no official synopsis exists as of yet. However, as far as sneak peeks and posters go, we have a good idea of what the plot entails. While we don’t know the exact plot synopsis, we do know that the film will follow Vibhooti. Saif Ali Khan is playing this lead character who seems to be a paranormal hunter or a “Ghostbuster”. The character and the movie itself have obviously taken inspiration from the Hollywood flick Ghostbusters. It seems the film is going to follow a similarly quirky and fun premise. Saif’s Vibhooti is the only character we’ve gotten a look at so far. Arjun Kapoor is playing the character of Chiraunji. The rest of the details are yet to come to light, with a trailer probably also dropping soon. Let’s now delve into the Bhoot Police release date.

Initially set for a September 2021 theatrical release date, Bhoot Police is now arriving on Disney+ Hotstar. Producer Ramesh Taurani talked about the film’s release to ETimes. “Look, I was supposed to release ‘Bhoot Police’ in September 2021,” said Taurani. “I felt that it would be better in the present scenario if I stick to my original month,” he added. He went on to add, “So yes, Bhoot Police will be released on OTT mostly in September or October.” Taurani also went on to add that he got a good deal with the OTT platform. “I have got a good deal. I do not discuss money in the public domain but I can tell you that I have not been shortchanged,” he told ETimes. Meanwhile, director Kriplani talked about working with Saif and Arjun. “I am thrilled to have Saif and Arjun come together for this entertaining feature,” said Kriplani.

Bhoot Police will be releasing on September 10, 2021. It is going to drop on the OTT platform Disney+ Hotstar. We are still to receive a trailer for the film. Kareem Kapoor recently shared the first look poster on her Instagram. The caption under it read, “Don’t fear the paranormal and feel ‘Saif’ with VIBHOOTI. #BhootPolice coming soon on Disney+ Hotstar.” The poster featured Saif in an all-black outfit holding a spiky weapon with a smirk on his face. We will keep you posted on future news and updates regarding the Bhoot Police trailer and release date. 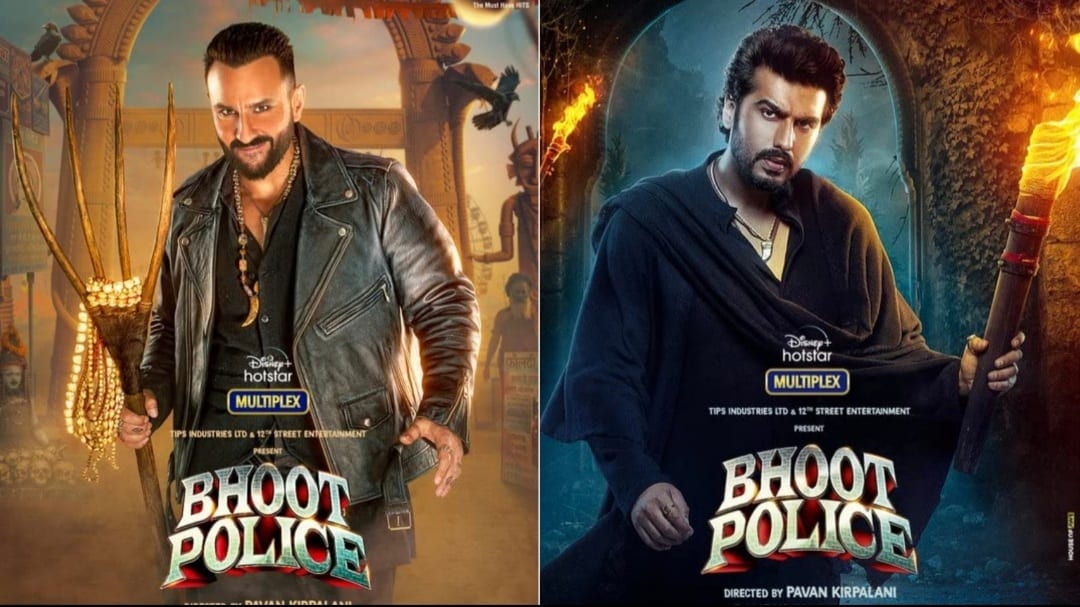 Saif Ali Khan as Vibhooti and Arjun Kapoor as Chiraunji in Bhoot Police (2021).