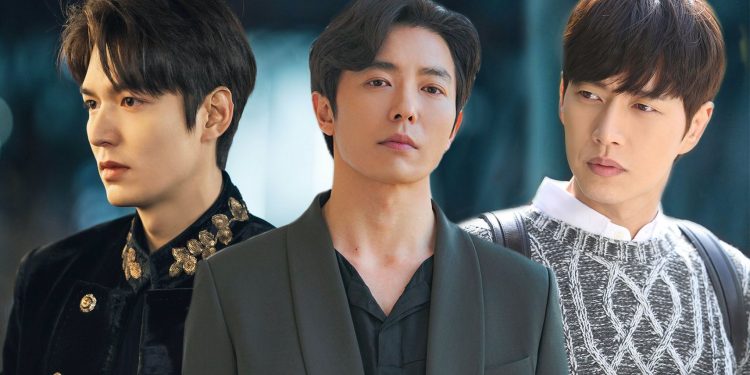 We’ve all made questionable choices in life and have liked the things that we should stay clear of. We’ve all dreamt of being in love with a bad boy who’d give his life for us being one of them. Binge-watching k-dramas and dreaming about that love is a common thought that occurs a lot in the mind of k-drama fans. And with the variety of bad boys, we’ve gotten as the male leads in some amazing k-dramas. We can’t stop ourselves from drooling over the visuals in front of us. We have seen a cold-hearted man turning into the softest human being alive as he experiences some love and affection from the girl he swore to never fall for.

While the troupe of bad boy and good girl falling in love has become a cliche. We can’t help but keep on watching and dreaming about what we can’t have. Especially the ones with the progress and the good guy transition we see are like a treat for the eyes. And with some upgrades, ‘help the bad guy change’ is becoming inclusive, as no family members and friends also help the guy realizing what he’s been missing till now. And all of it comes with an emotional journey because it can get relatable to a point where it feels like a straight attack.

So Here Are Some Bad Boy Male Leads That Takes You On An Emotional Roller Coaster.

It hasn’t been a while since ‘Nevertheless’ hit the streaming platforms, and people have been swooning over the characters. The k-drama takes on one of the most complicated aspects of adulting, ‘romantic relationships with no tags’. A campus drama that follows a bunch of college students at an art university. While the drama focuses on the lead couple, Yoo Na Bi and Jae Eon, it also focuses on her friends that have their relationship problems going on. Spending time together, Na Bi and Jae Eon falls in love with each other. But Jae Eon doesn’t really want to have a romantic relationship. Having a cheating boyfriend, Na Bi has trust issues, and not having a clear label with Jae Eon does messes her mind.

Played by Song Kang, Jae Eon is the perfect playboy who has no idea what he wants. While he does has Yoon Seol A i.e. the girl he loves and wants to be with in the end. Meeting Na Bi, he’s in love with her too. But being asked about what he actually wants, he has no answer to that. While it’s no lie that Jae Eon has his own problems and trauma that leads to his indecisive personality. It doesn’t really give him a right to mess with other people’s feeling. The ten episodes of ‘Nevertheless’ takes you on an emotional journey that either makes you go ‘aww’ or ‘what did I just watch’.

‘Move To Heaven’ is not your typical k-drama with a love story. While it does have the typical cold-hearted bad boy as the male lead, it’s something that cleanses your soul with tears and comforts with each episode. Fitting into the character of Cho Sang Gu, Lee Je Hoon does an amazing job. Starting from the typical playboy character, Sang Gu used to be a boxer. Coming from a house where he was abused and getting betrayed by his only hope i.e. his brother, Sang Gu, became a cold person. Becoming tough and getting into violence, he became an underground boxer and used to earn from illegal fight rings.

And as if the childhood trauma wasn’t enough for the cold bad boy fighter, his only hope and friend was hooked to the machines in the hospital because of him. After doing his mandatory jail time, Sang Gu gets to know that his elder brother (the one who betrayed him years ago) is dead. And now he’ll have to take care of his nephew. Having no other place to go, Sang Gu decides to give it a try. But as time passes, the bad boy unfolds the secrets of betrayal from the past. As he takes over his brother’s job and responsibilities along with the thing he longed for all his life i.e. love and somebody to lean on. And in ten episodes, it’s not just Sang Gu’s heart that begins to melt but fans’ too.

Shin Se Gi From ‘Kill Me, Heal Me’

One of the best psychological thrillers out there, ‘Kill Me, Heal Me’ takes you on an emotional roller coaster. Following Cha Do Hyun, an heir from a rich family as he suffers from Dissociative identity disorder. A first-year psychiatry resident, Oh Ri Jin and her ‘twin’ brother Oh Ri On, who’s a very popular writer. Having seven personalities living inside Cha Do Hyun, with each one coming out according to the stressful situation he’s in. Appointing a secret doctor, he begins his recovering journey. But in between lies secrets that nobody would’ve expected. While Cha Do Hyun is a respectful guy, one of his leading personalities is exactly the opposite and a nightmare for him.

Shin Se Gi is the bad boy personality of the main lead. With a leather jacket, a bike, and eyeliner, he’s the dream boyfriend of every punk/emo girl. After so many challenges and co-operation with his doctor, Oh Ri Jin, Do Hyun is able to overcome all of his personalities except for one. It’s the stubborn bad boy Shin Se Gi who has the most traumatic part of Do Hyun’s childhood connected to him. And as the secrets unfold and the confrontations take place in the family. A lot of unexpected truth comes out. With a total of 20 episodes, ‘Kill Me, Heal Me’ has one of the best ‘bad boy’ male leads.

Yoo Jung & Baek In Ho From ‘Cheese In The Trap’

The campus romance ‘Cheese In The Trap’ has not one but two bad boys as the male leads. Based on the webtoon of the same name, ‘Cheese In The Trap’ follows Hong Seol, a straight-A student, as her life turns upside down when she starts dating her college senior Yoo Jung. While their relationship was already very rocky from the start, her becoming friends with Baek In Ho, Yoo Jung’s former friend, just added fuel to the fire. Played by Park Hae Jin, Yoo Jung comes from a rich family and has the looks and brains. He’s loved by everyone at the university as everybody’s unaware of his ‘bad boy’ side. Being a manipulative and obsessive person, he won’t really give the other person a thought no matter who the other person in.

But once he’s sure about it, he’s ready to cross the limits for his love. The way he approaches Hong Seol is quite questionable and should only be limited to the show. And not be enacted in the real life. Played by Seo Kang Joon, Baek In Ho, on the other side, is the bad boy from streets. After his fight with Yoo Jung in school, he ran away from his home and fell into the gangs. Now running away from them, he’s been trying to turn his life around. The 16 episodes of ‘Cheese In The Trap’ are a perfect trip that takes from a toxic relationship and tells you about the red flags from the bad boy you should stay clear off. No matter how sad their sob story is.

Where To Watch: Rakuten Viki, Netflix

Heo Joon Jae From ‘The Legend of the Blue Sea’

Known as one of the classic K-dramas’ The Legend of The Blue Sea’ has the classic bad boy as the male lead. The story follows Sim Chung, a mermaid lost in the human world. Washed at the shore because of a tidal wave, Sim Chung lands at a resort. Seeing Joon Jae, she feels her past memories coming back to her. The two have a history from the 1900s. As Joon Jae was a newly appointed governor named Dam Ryung in his past life. He helped Sim Chung escape when she was caught by the greedy owner of an inn. In the new life, while he no idea about the past as expected, Sim Chung remembers everything.

Played by Lee Min Ho, Joon Jae is the classic bad boy, a cold-hearted smooth talker who doesn’t believe in love. Having no family or a serious relationship with anyone, he doesn’t care about anyone but his work. Working as a professional con man, he’s one of the best at scamming huge companies. Meeting Sim Chung in the midst of his vacation that soon turns into a cat and mouse chase with some people, he has no option but to take her in. But as they start living together and the mermaid magic happens, it doesn’t take long for the bad boy to become good. The 20 episode k-drama makes you wish if you could turn your playboy crush into a soft-hearted lover of yours.

Where To Watch: Netflix, Rakuten Viki

Kim Moo Young From ‘The Smile Has Left You Eyes’

Also known as the ‘Hundred Million Stars From the Sky’, ‘The Smile Ha Left Your Eyes’ is one of the most underrated k-dramas of the time and a heartbreaker. Remake of the Japanese TV series “Sora Kara Furu Ichioku no Hoshi, the story follows a detective as he tries to solve a murder case before getting retire. But looking at Yoon Jin Kang, his sister falling in love with Kim Moo Young, a bad guy, he’s got another task to complete. Save his little sister from the heartbreak. Jin Kang is a woman who will accept people no matter who they are as a person. Kind of the reason she fell for Moo Young irrespective of his trauma.

While it was easy to call Moo Young a bad guy, he’s got his own issues. Everybody has a love-hate relationship with him. Becoming a  suspect when a woman’s suicide that turns out to be murder is not easy to deal with for sure. As he has no recollection of his past memories, it is a bit difficult to read and understand him. He does look like the guy your parents tell you to stay away from. But as we go deep into his past with story, it kinda explains why he chose to become the guy he is now. The 16 episodes of ‘The Smile Has Left Your Eyes’ take you on an emotional roller coaster as we start seeing Moo Young getting vulnerable. Meeting Jin Kang and falling in love with her and letting himself melt in her embrace. They both make a huge impact in each other’s lives.

Where To Watch: Rakuten Viki, Mubi

Does Mordecai End up with Margret? The Love Story Of The Characters Of Regular Show!