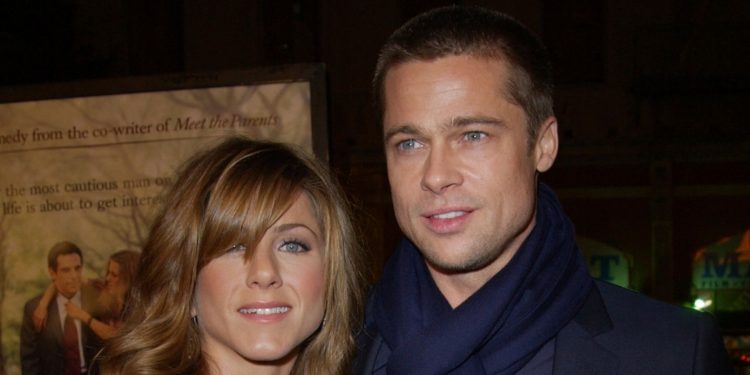 The two actors began dating in 1998 and almost instantly became the “it” couple in Hollywood who frequently attended red carpet events together. The popular couple got married in the year 2000 – but sadly they split up in the year 2005. Since then, fans have been begged for Aniston and Pitt to make up their romance, especially after Pitt’s marriage to Angelina Jolie ended. On Aniston’s part, she also remarried, but her marriage to Justin Theroux broke down soon after. The two award-winning stars have remained on good terms, met publicly at the SAG 2020 Awards, and again later that year virtually for a table read of Fast Times at Ridgemont High for charity. So, it raises the question among the fans if they are back together? Are Brad Pitt and Jennifer Aniston Back Together? Therefore, in this article, we will get to know everything about it.

Are Brad Pitt and Jennifer Aniston Back Together? The award-winning actress Jennifer Aniston has been rumored to get back with her ex-husband Brad Pitt. But it’s not true; it’s just a rumor. Fans spread these rumors after a recent report from US Weekly claimed that Pitt is ready to date again. A source also reported that Pitt wants to find that special someone to be with for a long time. This news came soon after Aniston herself confirmed that she wanted to get back into the dating game. As she previously told in September that she is ready to share herself with another.

And, Fans must have noticed that both Aniston and Pitt are looking for love by taking to Twitter to share their thoughts. Just because fans want Jennifer Aniston and Brad Pitt back together doesn’t mean they will. They sure seem pretty flirty at times and may still have feelings for each other, but the chances of them making up seem less. But who knows? If Jennifer Lopez and Ben Affleck manage to reunite, then anything can happen in Hollywood.

Unlike their romance, the couple’s first meeting was quite casual. The two met in 1994 through their manager, who happened to be friends. But their relationship did not turn romantic until they first met four years later. When Brad recently split from actress Gwyneth Paltrow, and Jennifer split with actor Tate Donovan, prompting their managers to set up a date. The spark was ever so present on their first date that the couple immerses themselves directly in the relationship.

The famous couple walked the red carpet together for the first time at the 51st Prime Time Emmy Awards, confirming rumors of their relationship. Brad went on his knee to Jennifer in 1999, and they married the following year. After five years of marriage, the popular couple announced their separation in early 2005. Brad continued to date and marry actress Angelina Jolie, while Jennifer married Justin Theroux. The two divorced their husbands and have remained close friends ever since. Most recently, in 2020, they took part in a virtual table read and played some flirty characters on screen.

Who is Brad Pitt?

The famous American actor Brad Pitt started out with small roles in Hollywood films. The American actor showed an interest in acting from a young age and left college to pursue a career in the showbiz world. After minor acting roles in films such as “21 Jump Street”, “Cutting Class,” and “Happy Together,” he made his big break in “Legends of the Fall.” He starred in a lead role with many other talented casts, including the acclaimed Anthony Hopkins, and his performance was well-received. The actor impressed the world not only with his acting qualities but also with the social causes he represents and his regular contributions.

Who is Jennifer Aniston?

Jennifer Aniston is an American actress, film producer, entrepreneur, and philanthropist. Being born into a family of actors, Jennifer decided at an early age to follow in her parents’ footsteps and train herself accordingly. But despite all her efforts, she was unsuccessful for six long years. It wasn’t until she landed the role of Rachel Green on the popular television sitcom “Friends” that she was able to make her mark. Thanks to her role, Rachel Green became so popular that the hairstyle she wore on the sitcom became known as The Rachel.