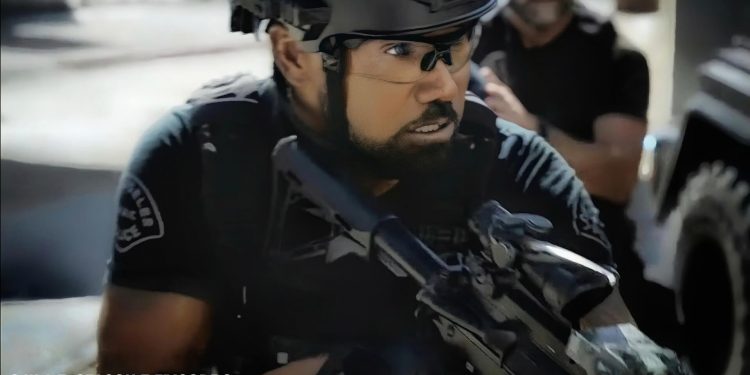 “S.W.A.T.” season 5 episode 8 will be the last one before a long hiatus. Christmas is approaching, and the festive season means that most of the on-air shows will take a hiatus for a while. However, when the show returns for its eighth episode, it will deal with a brutal kidnapping case. The official synopsis hints towards S.W.A.T. forming an unlikely alliance in order to solve the case and save the abductee.

“S.W.A.T.” season 5 episode 8 is set to release on December 10, 2021. The official synopsis states that the episode will deal with an abduction case. An undocumented woman will be violently abducted, bringing in the S.W.A.T. team to investigate it. The team will have to form an unlikely alliance to rescue and bring the woman home alive. Alex Russell has directed the episode, with Mellori Velasquez penning the teleplay. The title for episode 8 is “Survive,” pointing to the condition that the abductee will have to struggle and live through.

Episode 8 of “S.W.A.T.” season 5 will air on C.B.S. on Friday, December 10, at 8:00 pm ET/PT. The episode will air on C.B.S. Television Network. You can also watch the episode online via live and on-demand Paramount+. The viewers can also stream S.W.A.T. season 5 online on C.B.S.’s official website. You can also watch the T.V. show via live T.V. services like Hulu+Live TV, DirecTV, YouTube T.V., and Fubo TV. The viewers can also buy or rent S.W.A.T. episodes on iTunes, Amazon Instant Video, V.U.D.U., and Google Play.

Episode 7 sees the SWAT team on a trail for a stockpile of cash and the surrounding danger to several lives. The episode opens with Chris’s birthday. However, she doesn’t care for her birthday and has no desire to celebrate it. Everyone else is in a celebratory mood, though. However, before anyone could bother Chris with her birthday wishes and celebrations, the team receives a case. The case entails the Russian mafia and some kids that the Russians are trying to kill. We learn that the mafia is out for the kids, following one of the kids robbing a place and fleeing.

The team arrives at the scene and contains the armed mafia guys. Before they stop the mafia, however, they managed to shoot one of the kids, injuring him severely. Meanwhile, the other two kids fled and are now also wanted by the police. While the injured teenager is sent to the hospital, the SWAT investigates the reason why the mafia is trying to kill these kids. Soon, Hondo gets lucky when someone familiar offers to help them with the case. Saint is an old friend of Hondo’s father. He’s also a part of the local community and is knows who the injured kid is. He tells Hondo that the kid’s name is James.

Hondo and Team Chase Leads As Time Runs Out

Saint then admits that although he knows the kids, he isn’t all that familiar with them. However, he suggests a woman who would know all the kids, and she turns out to be a great help. Hondo and the team find some security footage of the store the kid robbed. They brought in the store owner for questioning just as he was packing his bags to go somewhere. The store owner quickly breaks and confesses everything. He reveals that the mafia uses his store for money laundering. He then tells them that James and his friends stole fifty million dollars from them. Having now known what the situation is, the team sets off to find the two kids on the run.

Hondo gets another lead through a woman that Saint knows. She gives him the contact number of one of the kids. The team uses the info to track down the kid. They eventually get to their hiding place, but so have the mafia guys. As the mafia and the team fight off, the kids flee again. With the kids making it more and more difficult for the team to help them, the mafia guys won’t open up either. The team learns, however, that they work for Sasha — a ruthless immigrant who once escaped a Russian prison. He wants his money back and sends his men to go and get it by whatever means necessary. Time is running out, and the team needs to get to the kids before the mafia does.

James regains consciousness and tells Hondo about the kids’ hiding place. The team reaches the hiding place and finds Fabi, one of the two kids. They learn that while she is hiding with the money, her brother Manny was trying to get rid of the mafia. They had caught up to him, and now he was pretending to lead them to the money. The team gets Fabi to a safe place and goes after Manny. He doesn’t have much time left before his act blows over. Thankfully, the team arrives before that happens and saves him from the mafia guys. The team pursues the Russian men who try to flee, with Hondo confronting a man who turns out to be Sasha.

They detain all the mafia men, and the case concludes. However, the ending of episode 7 reveals that the case might’ve entailed more. Hondo learns that Saint was actually behind the Russians and helped the police to get his money back. Hondo confronts him about it, to which Saint retorts that he doesn’t have any proof to back the claim up. However, it’s apparent that he was indeed behind all that transpired. The episode’s ending also sees Street giving Chris a birthday present. It is a sky-diving voucher, and Chris has always wanted to do that.

Adrian Peterson’s Net Worth: How Much The Footballer Earns in 2021?