Dragon Ball has many popular characters loved by weebs, and Master Roshi makes a list. Because of its upcoming end, the trending anime features the story of Son Goku, a young boy who embarks on a journey to discover the Dragon Balls, which, if a person has gathered all 7 of them- will be granted any wish of their choice. As Goku trains to become stronger, we see many characters join his adventure- some turn out to be friends while others are his rivals. The one character who makes it to our inquisitive interest is Master Roshi.

Master Roshi or Kame Sennin was Son Goku’s martial art master. The elderly bald character has often been criticized for his antics but has served as the wisest character despite being foolish on some occasions. He is deemed the innovator of the Kamehameha technique and first appeared in the 3rd chapter of the manga.

While, Goku wasn’t the only student of Master Roshi as other characters like The Ox-King, Yamcha, and even Krillin were his pupils. Master Roshi lived on an island known as The Kame House. This location was significantly relevant throughout the journey of Goky since it was a gathering place for him and a return for many characters from time to time. Quite good with disguises, Master Roshi assumes the identity of “Jackie Chun” when he wishes to fight anonymously at the World Martial Arts Tournament. 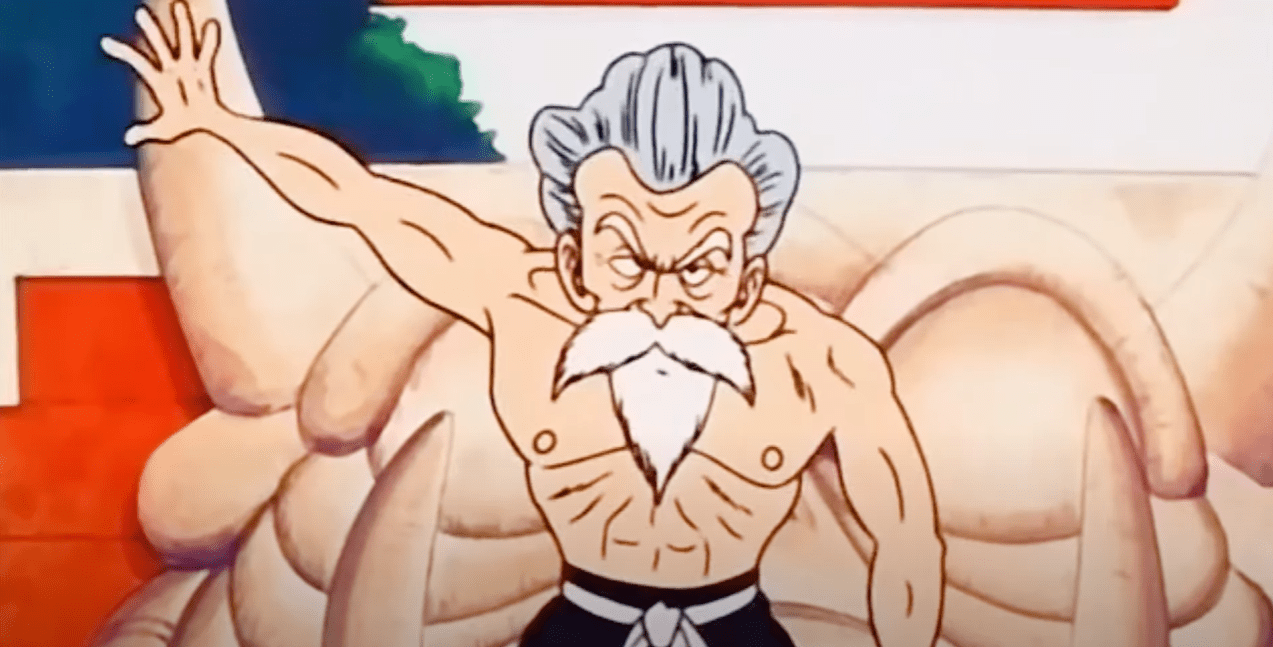 Master Roshi is consistently depicted as a pervert but at the same time demonstrates his great abilities by often increasing his energy. This was evident while he was putting out a fire on Mount Frypan, thus again showing why he is called Master Roshi and taught Son Goku. Despite his bulky body structure, he is precise in attacking and defending in battles.

Master Roshi was considered to be one of the strongest mortal fighters in Dragon Ball. His power level, however, if we compare it now, is less than what Goku and his allies are capable of. Master Roshi no longer appears as the main character as the manga focuses more on Goku and his allies towards adulthood and their fight abilities. His character was revived during the arc of Dragon Ball Super, where he was appointed as a representative of the Seventh Universe by Goku himself. However, his behavior caught up to him in mid of a battle where he eliminated himself before Frost (Sixth Universe warriors) nearly killed him due to the Mafuba technique.

While he has been voted in IGN’s Top 13 Dragon Ball Z Characters List of 2015, which not only gave credit to Roshi’s role as a comic relief character but further highlighted the importance of the character’s in-universe legacy for being the inventor of the Kamehameha (since it’s counted as Goku’s signature move as well). While his attempts to catch the attention of female characters added to the comical side of the manga, many scenes were removed during the adaptation of the broadcast of the Dragon Ball anime because of being offensive.

How Old Is Master Roshi?

Across all the major shows, namely Dragon Ball, Dragon Ball Z, and Dragon Ball Super- all human characters have aged and continued their family by having children and grandchildren. Yet, the only consistent character who remains the same as Day 1 is Master Roshi.

Master Roshi is considered one of the oldest characters of Dragon Ball and, thus, also immortal. Adding significance to the anime and being one of the most important characters at the start, it is said that he was around 300 years old. What’s confusing is that he is a mere human, and by the end of Dragon Ball Super – he is supposed to age between 340 and 350 years!

It is fair to believe that he possesses eternal life. In the anime, it is shown that he lives this long due to eating the Paradise Herb. However, there are limitations to this exposure as he has to indefinitely eat the herb every 1000 years, and he can die via unnatural causes.

It was a misconception by the viewers at the start that Master Roshi achieved immortality by his pet phoenix, but then came untrue when the phoenix died at the beginning of Dragon Ball. In the filler episode of Dragon Ball Super, “Goku and Krillin! Back to the Old Familiar Training Ground!” Master Roshi sent Goku and Krillin to find an herb called the Paradise Plant.

Also Read: How old is Bulma in Dragon Ball Super?