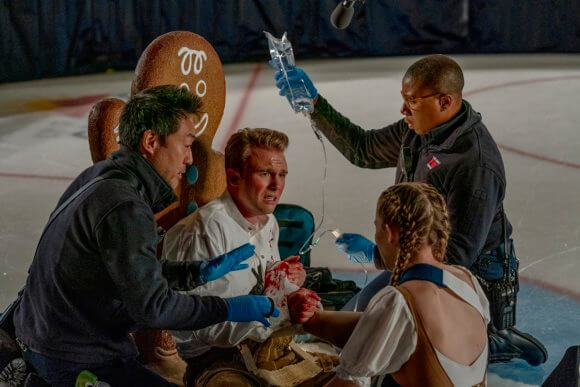 Tonight’s episode of 9-1-1 (Season 3), titled ‘Malfunction,’ will deal with a series of mishaps. From a skating mishap at an ice show; to an accident involving a self-driving car, at a fulfillment warehouse, a robot goes rogue; and then Eddie’s after-hours fight club gets out of control. He will struggle in her relationship with Karen.

As you may have seen in the teaser trailer above, Fox’s 9-1-1 has declared this episode to be the most unforgettable of the season. So far, Season also featured an episode on the California tsunami. Episode eight, “Malfunction,” is all set to air on Monday, November 11, 2019, at 8 pm ET/PT.

9-1-1 comes straight from the creators Ryan Murphy, Brad Falchuk, and Tim Minear. The show is their attempt to reimagine the procedural drama. They try and explore the high-pressure experiences of police officers, firefighters, and dispatchers. As the team at 9-1-1 is thrust the most unexpected, shocking, and heart-stopping situations. Those working at the emergency service must respond quickly in real-time, and save lives of the most vulnerable.