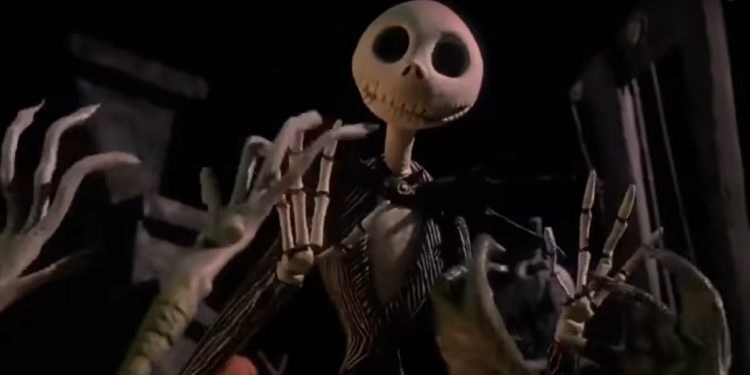 Right after Nightmare Before Christmas came out in 1993, the movie became an instant hit. And all of a sudden, everybody became fans of the Tim Burton gothic horror stop-motion-inspired flick. Nearly thirty years after, generations of fans keep getting hooked on the film. And we at Otakukart prepared some interesting Jack Skellington facts that you might like to know.

The black pin-striped suit skeleton character with a bat bowtie and impossibly long limbs captivated generations of fans. His face is printed everywhere, from bags, umbrellas, pins, patches, tattoos, posters, and even videogames like Kingdom Hearts. How is it that a standalone movie about a skeleton king from a Halloween Town that kidnaps Santa Claus turns Halloween into a nightmare gained such cult status? Come with us and find out!

In the original Nightmare Before Christmas film by Henry Selick, Jack Skellington is a patron spirit of the All Hallow’s Eve festivity. In the story lore, each festivity, Christmas, Thanksgiving, Halloween, Easter, Valentine’s Day, St. Patrick’s Day, and the Holy Week has a representation in a Mythical Forest of trees that circle each other. So, when Jack enters a portal that allows him to go to this forest. He chooses the Christmas tree portal, thus accessing the Christmas town, and he’s impressed by how cool everything is there, as such, he wants to bring Christmas to Halloween Town.

By doing so, he causes great trouble. Because Jack Skellington is the spirit of Halloween and all things terrifying, he instructs the Halloween townsfolk to prepare the Halloween Town to embrace Christmas, but the townsfolk doesn’t know how to do it. He studies the Christmas folk and takes the unilateral decision that this year, he will relieve Santa Claus from his duties and act as the Christmas Spirit, causing extraordinary havoc in the process.

2. Jack Skellington Is A Disney Character

Although Nightmare Before Christmas was a different movie, with varying tonalities by 1993. Firstly, the dark gothic tone sets a giant precedent in Disney’s history of storytelling. With a great soundtrack by master composer/conductor Danny Elfman and a story by gothic master Tim Burton, Henry Selick managed to adapt a script by Caroline Thompson under the cinematography of Pete Kozachik in stop-motion format that captivated generations.

Distributed under Buena Vista Pictures and Touchstone Pictures, two companies that would later get absorbed by Walt Disney Pictures, Jack Skellington is essentially a Disney character thanks to corporate mergers. In fact, we can find Jack in Disney Parks like Disneyland, California, Disneyland Hong Kong, Disneyland Paris, and Disney World Orlando, Florida. He showcases fireworks shows and parades in those venues.

The Pumking King Jack is featured in many video games. He’s a cultural icon, after all. And what pop culture icon doesn’t show up in video games? He’s been in his own game like “The Nightmare Before Christmas: The Pumpkin King” (for the Game Boy Advance) and “The Nightmare Before Christmas: Oogie’s Revenge” (for the PlayStation 2). In both those games, he faces his nemesis, Oogie Boogie.

Jack’s also present in the Kingdom Hearts video game series. It wouldn’t be fair if he wasn’t present in Halloween Town. And there, he befriends Goofy, Sora, and Donald Duck, where they battle the main antagonist and Oogie Boogie. Additionally, when the trio meets Jack, he introduces himself as the King of the town, where he plans to employ the Heart created by Finklestein to create a “Heartless Halloween” festival. Keep reading for more Jack Skellington facts.

4. Sally, Jack’s Girlfriend Was Supposed To Have a Limp

Sally was originally supposed to walk with a limp. But the filmmakers changed her gait because Sally looked as though she was drunk instead of physically incapacitated. The story arc behind Sally was closely supervised by Burton. Initially, she wasn’t supposed to be a love interest for the Pumpkin King. But Burton insisted so much and cajoled the scriptwriters into finally having his way. Moreover, Sally had ten types of faces, eleven facial expressions, and her animation style was different from the rest because of her long hair.

In “The Nightmare Before Christmas,” Jack Skellington was voiced by two people. Firstly, Chris Sarandon voiced his normal speech. If you’re not familiar with Chris Sarandon, you might remember him from his roles in Dog Day Afternoon (opposite Al Pacino), as a police officer investigating Chucky’s murders in the 1988 slasher film Child’s Play, and in recurrent roles in television shows like Felicity, Chicago Hope, and ER.

Secondly, Jack Skellington’s singing voice comes from the vocal cords of Danny Elfman. He’s a veteran composer, singer, and songwriter who frequently works with veteran directors like Gus Van Sant (who directed Good Will Hunting), Tim Burton (who’s also behind The Nightmare Before Christmas, as well as Batman and Edward Scissorhands), and Sam Raimi (Spider-Man and Doctor Strange in The Multiverse of madness). Elfman claims he had a really easy time writing all of the ten songs featured in the movie.

Since The Nightmare Before Christmas was a stop-motion movie, that means that each frame was individually shot. After that, the dolls were moved, and then they have shot again and again. It’s a long process. Many animation filmmakers consider the process tedious. But in the end, the results are rewarding as it creates a beautiful sequence.

The team that created and sculpted Jack Skellington made over 400 heads with different expressions of his face to animate the Pumpkin King. With a storyboard production creative flow, over one hundred people in staff, and more than a dozen animators on the job. It took Selick three and a half years to produce this cult-status masterpiece.

One of the most iconic standouts from this character, apart from his impossibly long limbs, is his suit. That pin-striped suit wasn’t pin-striped when Henry Selick and his crew began working on The Nightmare Before Christmas in the first place. It was initially all-black. But they chose to adorn his black suit with white pinstripes to stand out because the background they were shooting was already dark, to begin with. The creative process of Nightmare Before Christmas was a giant storyboard. And then that storyboard was transferred to a group of more than a dozen animators and sculptors that molded and shaped each character into their forms. It’s hard to imagine a different aspect of that film changed. Let alone something as exquisite as Jack’s suit.

8. Pumpkin King Appeared For The First Time In Beetlejuice

Contrary to common belief, The Pumpkin King didn’t debut in the 1993 film that made him jump to fame. Instead, he made a super brief cameo —an easter egg— in the 1988 comedy horror film by Tim Burton “Beetlejuice” starring Winona Ryder and Michael Keaton. Where does Jack show up you might ask? Well, while he doesn’t have any lines, we see him as a decorative hat/umbrella on top of Beetlejuice’s head as he makes a dramatic entrance in one of the scenes of the movie. This just proves how much of a cinematic genius Burton is. Check out the scene below.

9. The Pumpkin King makes Another Cameo in “James and Giant Peach”

After The Nightmare Before Christmas, Jack didn’t stop showing up in movies. He liked to pop in movies every now and then. While he liked to focus on handbags and umbrellas and other novelties for the goth crowd. He got called upon by Tim Burton and Henry Selick in another picture. That’s right. The gothic duo called the Pumpkin King to make another cameo at a 1996 Disney film called “James and the Giant Peach”.

That movie is an innovative combination of live-action and stop-motion animation that brings to life a novel from the early 1960s by Roald Dahl out of a screenplay by Karey Kirkpatrick, Steve Bloom, and Jonathan Roberts. It stars Susan Sarandon, Richard Dreyfuss, David Thewlis, and Simon Callow, among others, in stellar roles. In this movie, Jack Skellington is at the bottom of a sunken pirate ship. Check out the scene below!

10. Producer Tim Burton Is Against A Sequel of a Jack Skellington Story

Tim Burton owns a part of the rights to The Nightmare Before Christmas, and on several occasions, he manifested his discontent in regards to a sequel to this classic 1993 Halloween —not Christmas— film. For the goth director, the film’s imperfections, story arcs, and ideas are fine with a standalone movie. Just imagine the kind of havoc that Jack would wreak if he visited Eastern Town or St. Patrick’s Day Town.

While there’s a book on the works, there’s little to no hope that Burton would agree to a film sequel to this classic. And considering how demanding the niche that Jack Skellington story. Think how angry the black underground niche would get if a sequel just flops in regards to the box office and story arc. Nobody would forgive Tim Burton for caving into the demands of corporate Hollywood in those regards. With this, we wrap up our scoop on Jack Skellington facts here at Otakukart.

Also Read: Elizabeth Peratrovich’s Net Worth: How Much The American Civil Rights Activists Made?

Is Spoiler Really The Dragon Reborn in ‘The Wheel Of Time’ Episode 8?