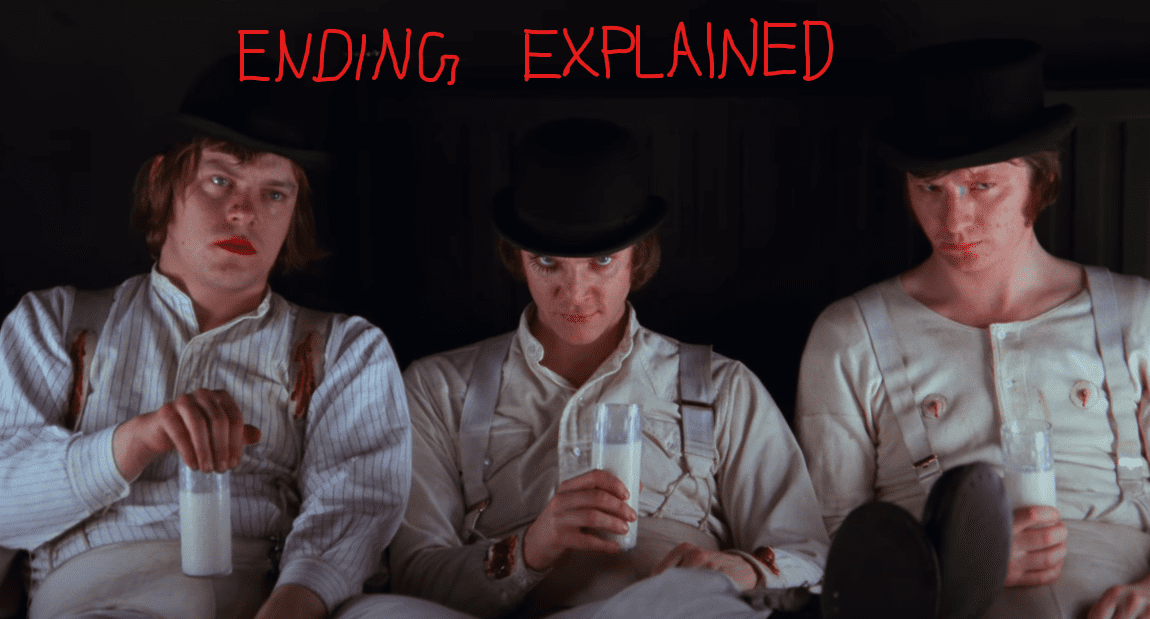 A Clockwork Orange, a criminal sci-fi film by Stanley Kubrick, is unlike many other films in that it has received unanimous acclaim and creative worth. It’s one of the most well-known dystopia writings, and some people these days even classify it as notional fiction. It’s adapted from the 1962 novel of the same title.

And here is our view on what this was all about; the storyline and conclusion of A Clockwork Orange explored, given that the film’s concepts and symbols are just as important now as they were in the 1960s and 1970s.

The film was created as an adaption of a 1962 novel by Anthony Burgess. The novel and film vary most noticeably in their concluding parts. In literature, the plot typically finishes on a happier note. The Ludovico Technique really does rehabilitate people, and the story has a mildly satisfying conclusion.

Naturally, the book’s final chapter was left out in the US since the publisher believed that the American readership simply wouldn’t find it credible enough. Naturally, the director also held that opinion.

The narrative centers on Alex DeLarge, a young offender is living in a hypothetical dystopian England. Alex is a head of a group of 5 miscreants (himself counted) with a tendency to obtain high on drug-induced milking and executing various violent deeds. It is quite evident from the outset that Alex DeLarge, like Patrick Bateman in American Psycho, is not just a psychopath but also a byproduct of his civilization.

They smash into a remote residence one night, assaulting the resident writer, Frank, and savagely raping his spouse. A few days later, Alex is abandoned by his companions after one of his regular robberies and is found guilty of 14 years of imprisonment. He is chosen to serve as a test dummy for the so-called Ludovico method after serving 2 years of his sentence. In this experiment, the patients are trained by receiving injections of medicines designed to allow them uncomfortable while viewing visuals of horrifying violence.

The method’s creators envision a day when they will be able to modify people’s nervous reactions to such activities. This shortens the sentence and clears up jail space. The experiment successfully serves the narrative needs of the film. Alex passes through a lot of trials after being freed from jail. These include being imprisoned and harassed by the author, as well as being tormented by police officers, his 2 former group members, Dim and Georgie & Frank, one of his past targets.

When Frank confines him in and makes him hear to Beethoven, he makes an effort at suicide. The Ludovico method has made Alex hate the music now.

Alex wasn’t himself. He has zero self. Alex now decides to openly support the governing party in return for a lucrative job in the movie’s conclusion. He is thinking, “I was healed all fine,” because he is hearing Beethoven and appreciating his great luck. Alex’s passion for bloodshed had been removed by the Ludovico Technique, but then in his eyes, the remedy was much worse than the illness: he expected that it could get him out of jail and allow him to lead a normal life again, but instead it made him feel helpless and miserable.

Nevertheless, neurosurgeons “detrained” him throughout his interval of coma following his suicide attempt such that listening to Beethoven’s Ninth no more made him feel extremely uncomfortable. Alex’s concluding statement is ironic in proportion because he has been healed of the cure. The absurdity is much more intricate, however because we can also see Alex’s inner thoughts when he asserts that claim. In Alex’s dream, he is lying on his back and is being held down by his companion. 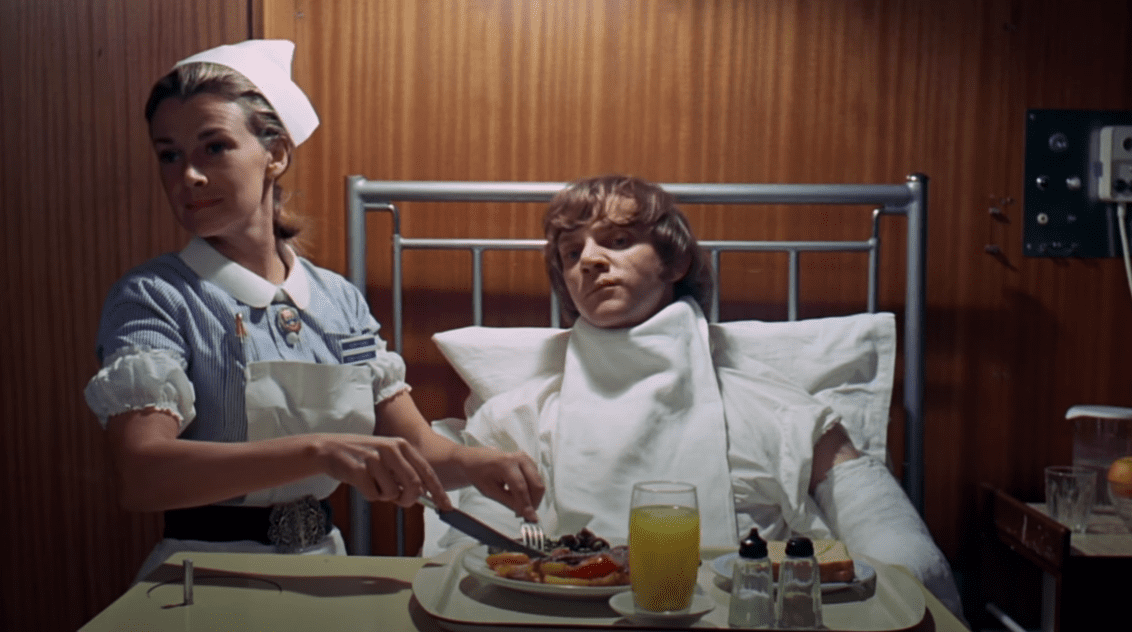 Alex having breakfast with the help of the nurse.

Both of them are laughing and obviously having fun as Alex lunges for her chest while she bats his arms away. Rows of individuals wearing Edwardian attire are graciously clapping. Alex is visualizing a sexual act that is consenting, which is clearly very different given what we have already witnessed. In view of his contract with the government, which will look after Alex in exchange for his support and, probably, his vow to refrain from aggression, the scenario must be understandable.

He considers this to be a good compromise: he can restart his sexual exploration only with willing grownups. He will receive approval and praise from the community as much as he upholds his half of the contract. It’s noteworthy how the only non-ironic or semi-non-ironic use of the Hymn to Happiness in the movie occurs with this dream. Hymn to Happiness praises the New Deal, within which Alex has finally enrolled, as well as the conquering of fundamental human divisions.

But in conclusion, Alex falls victim to social deception by signing a deal with the authorities. He has succeeded as a hypocrite, which in itself is what everyone actually wanted of Alex, and that is why his recovery would be both victorious and tragic.