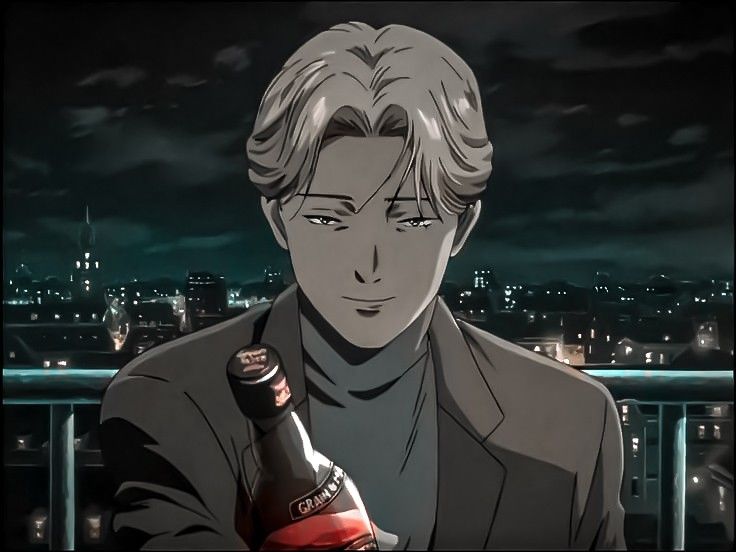 ‘Monster’ is really one of the most promising psychological-thriller containing a little of every aspect a viewer may enjoy. The show is a well-loved classic with a very rich plot and some unforgettable characters. Johan Liebert, one of the most iconic characters from the anime series ‘monster’ is arguably one of the best antagonists.

Despite his limited screen time, the character has managed to carry the show single-handedly and emerge as one of the most popular characters of all time with his influential style of speaking and presenting himself. Viewers have confessed to relating to Johan on a personal level, further adding to his popularity.

Johan is quite a character with his disturbing past and quite a charismatic personality. His original goal was to be the last one standing at the end of the world, and thus, he uses his intelligence to cruelly manipulate people with the sole purpose of causing suffering and destruction for his own pleasure. The only person he has a profound respect for is Dr.Tenma, who saved his life when he was shot in the head as a child, and Johan exudes eternal gratefulness for him throughout the series. Johan’s character is very manipulative and cruel but is liked by many since it reflects true human behavior.

Even though Johan Liebert is seemingly an iconic character and even termed as the best villain of all time by many critics, his cosplays are limited. I suppose it is because the cosplay itself does not require much effort. In the manga, Johan is described as a handsome man (claimed by many other characters too). He has blond hair with striking blue eyes and is always seen wearing his signature beige formal suit. Pretty simple but very precise.

Despite the shortage of good Johan cosplay, we have put together a list of the top 12 Johan Liebert cosplay, which are bound to make you say,”wow!”

Starting off strong we have Hanamiya. Hanamiya is quite a famous cosplay artist with over 8K followers on Instagram. She has recreated the cosplay of some very renowned characters like Kazutora(Tokyo Revengers), Griffith(Berserk), reze (chainsaw man), and many more. Her cosplay definitely deserves to be on our list. The blonde hair is perfectly styled and the expressions are on point. We think Johan would approve of it. 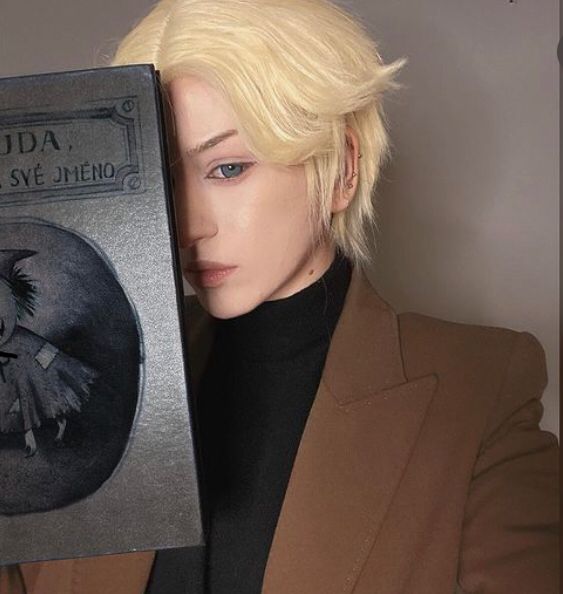 Johan Liebert cosplay with a book

Yaki is an Instagram famous digital creator who has cosplayed a variety of characters from Mikasa (Attack on Titan) to Rem (Re:zero). This budding cosplayer is so good at what he does. He is especially good at the makeup that goes into the making of the cosplay. His Johan’s cosplay is no less. The makeup is done to perfection, and the recreation of Johan’s iconic pose of ‘no regard for life’ is executed flawlessly. 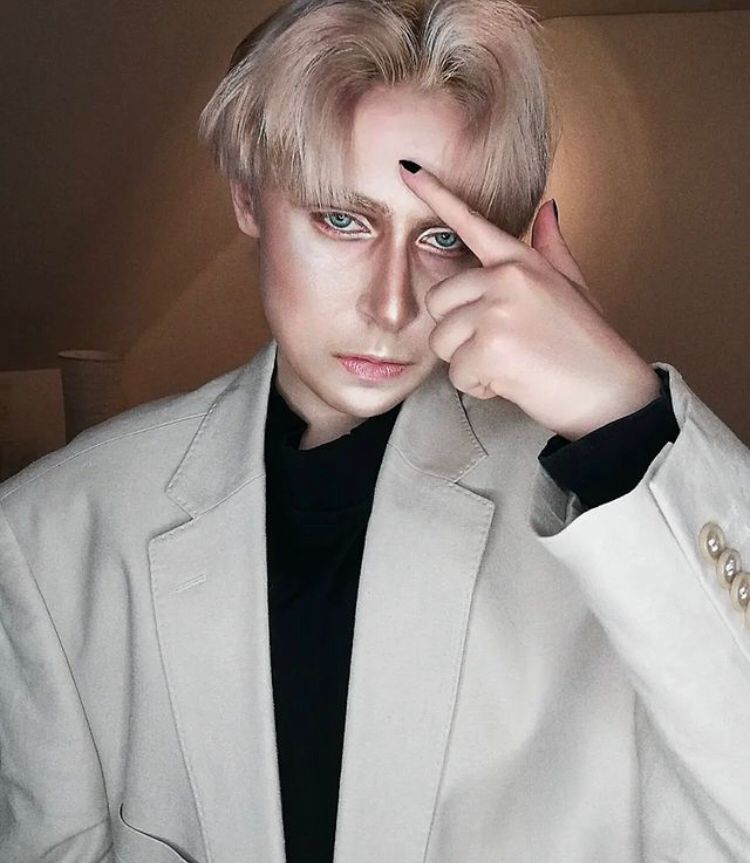 Johan Liebert shows how he has absolutely no will to live

Simay’s take on Johan is definitely quite different from the original but intriguing nonetheless. The cosplayer chose to recreate two of the most famous scenes from the manga. The drink scene and the book scene. We have to agree, the cosplay is actually quite amazing. A bit different from the original Johan in terms of the color of the suit, but overall, the cosplay is legit. The depth of the character is there, the creativity is there, and the accuracy of expression is there. What is not to like? 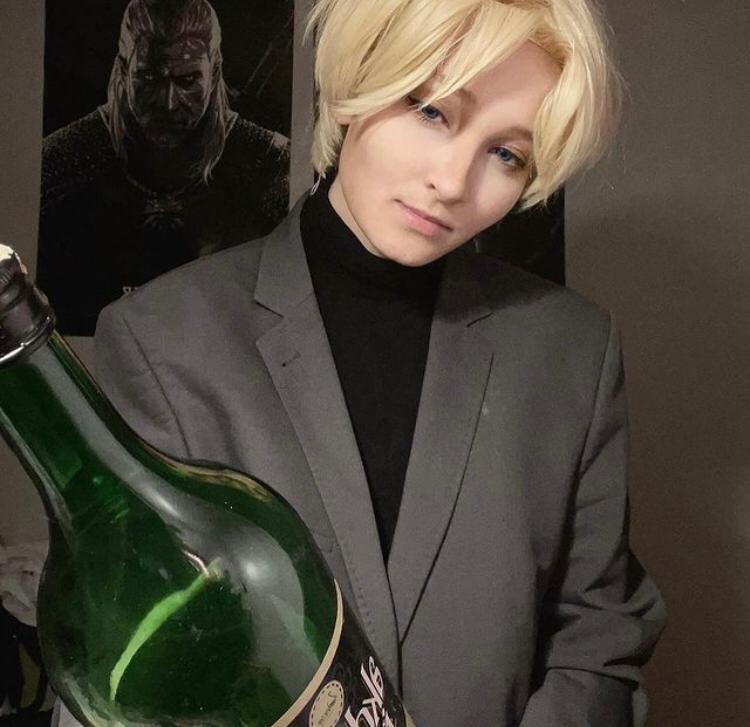 Johan asking for a drink

Azul (@beanie__man) is a medical student residing in Italy and is an aspiring cosplay artist. The 20 years old has cosplayed some other well-known characters like Yoshikage Kira (Jojo’s Bizarre Adventure part 4) and Armin Arlert (Attack on Titan season 4). Azul’s take on Johan’s character is pretty simple but very accurate. From hair to the suit itself, the look is spot on. Azul recreated the famous “would you like a drink” scene from the series which is quite impressive. 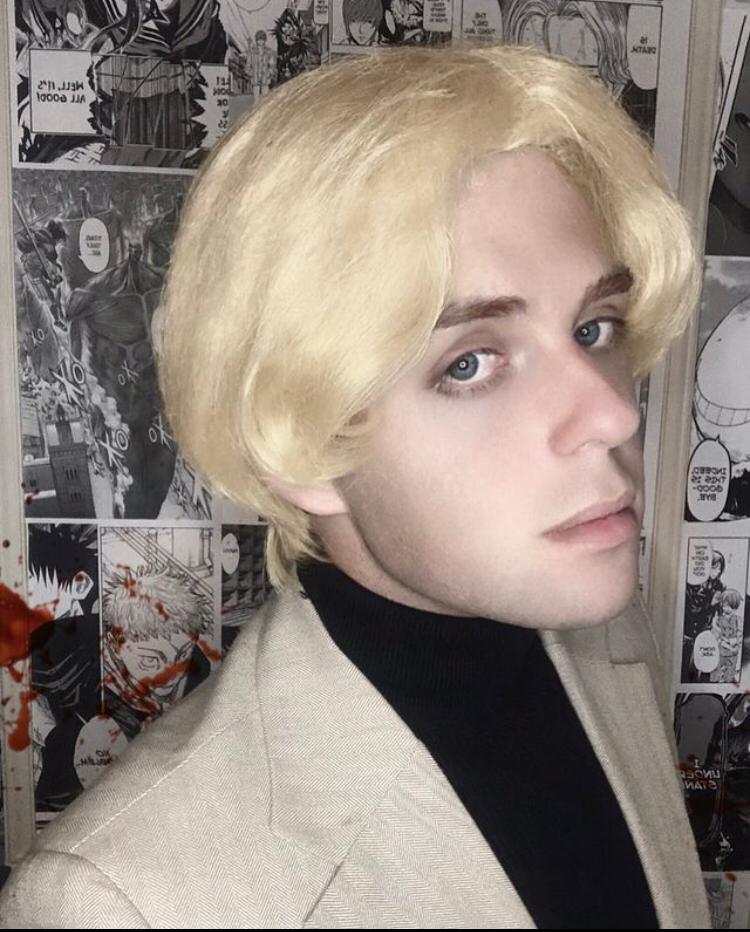 @alexis.yuji is a digital creator, an editor, and an aspiring mangaka. They have also entered the realm of cosplay. The artist has perfected Johan’s prominent pose of a finger on the forehead which signifies Johan’s no regard for life. The cosplay is perfect in that aspect. Can we take a moment to appreciate the absolutely remarkable facial expressions? Johan’s signature pose could not be portrayed more perfectly! 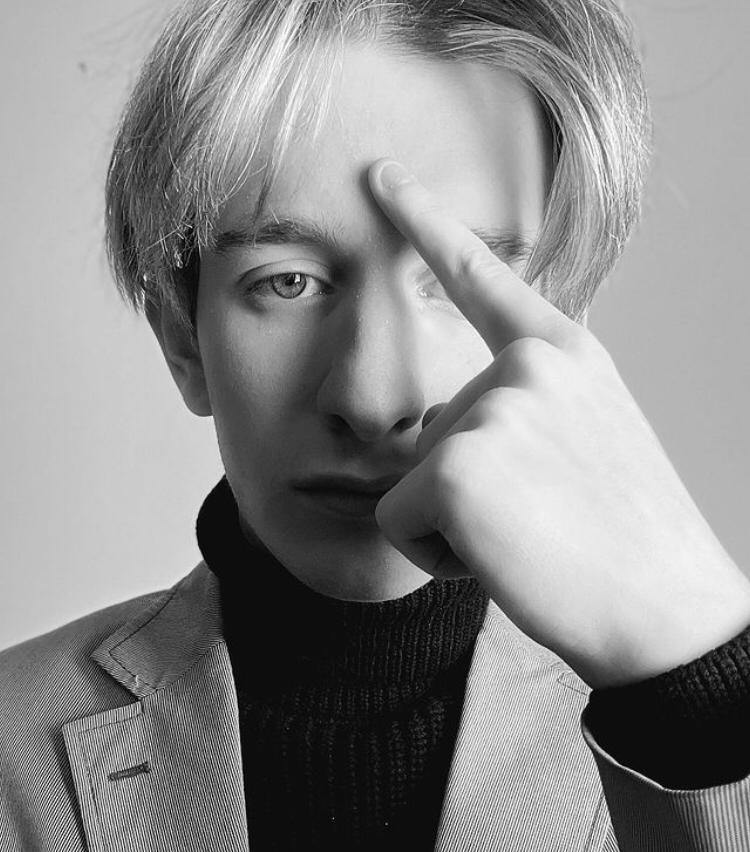 The most iconic ‘no regard for life’ pose

This cosplay artist has definitely done her research. If Johan were to be real, this is it. The cosplay is absolutely spectacular. The costume is 110% accurate, the makeup is done so well, and it elevates the usual ‘emotionlessness’ of Johan’s character and makes it seem more realistic. The artist recreated the ‘no regard for life’ pose and KUDOS to the efforts put into the makeover. 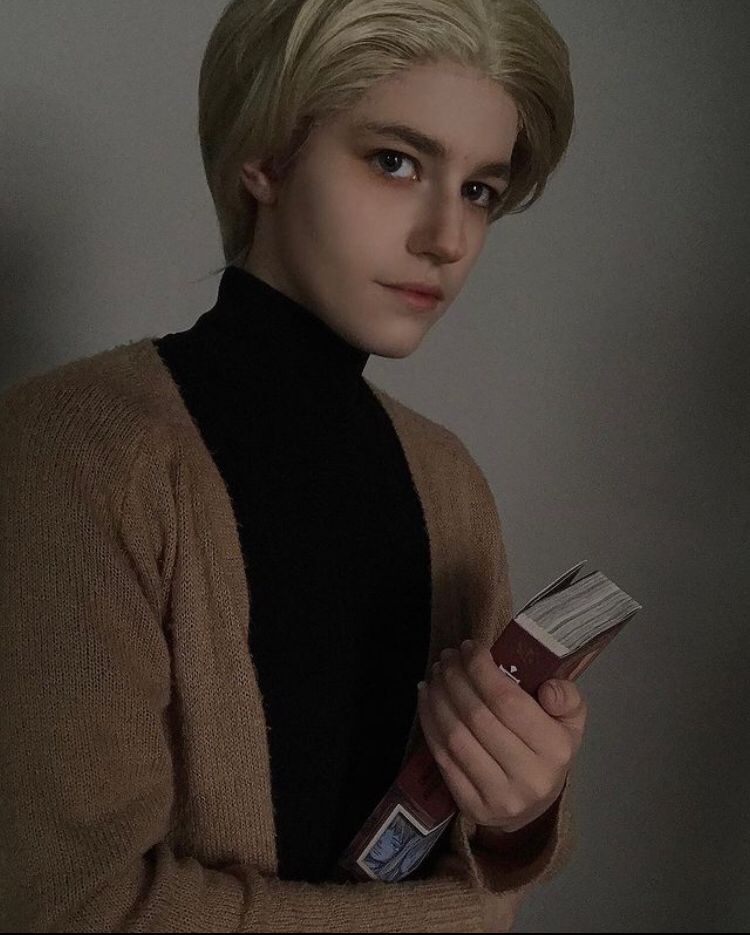 This is what you call professional! The 19 years old cosplayer is the real deal. With over 21K followers on Instagram, the artist has cosplayed some very famous characters like Aki Hayakawa (Chainsaw Man), Yatora Yaguchi (Blue Period), and many more. To add to the list,@toobo__’s cosplay of Johan is out of this world.

Being a huge fan of the ‘monster’ anime herself, she has nailed the look. The costume is accurate, the makeup work is simply miraculous. It brings out the depth of the character and makes it seem so much more realistic. This is one of the best cosplays we came across and we cannot stop talking about it! 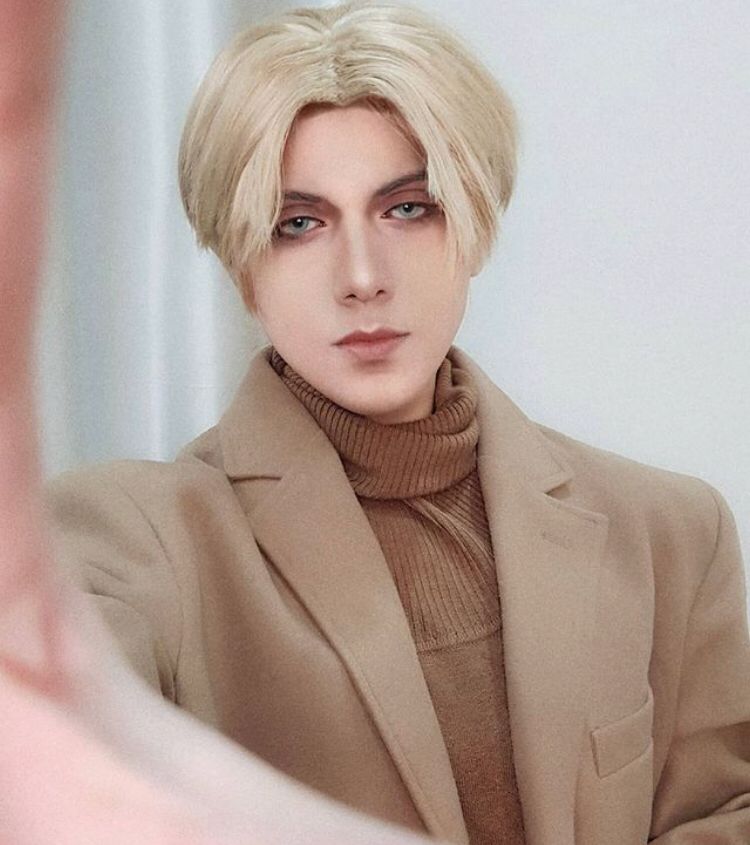 Pahms cosplay of Johan is definitely peak artwork. The artist has one of the best works in the industry of cosplaying. With over 6K followers on Instagram, Pahms is continuously producing great works. Let us take a moment to admire the absolute perfection of this cosplay. From the costume to the hair to the makeup, not one detail is left out. The picture itself explores Johan’s complex character, and it can be said, without a doubt, Pahms definitely did justice to Johan’s cosplay. 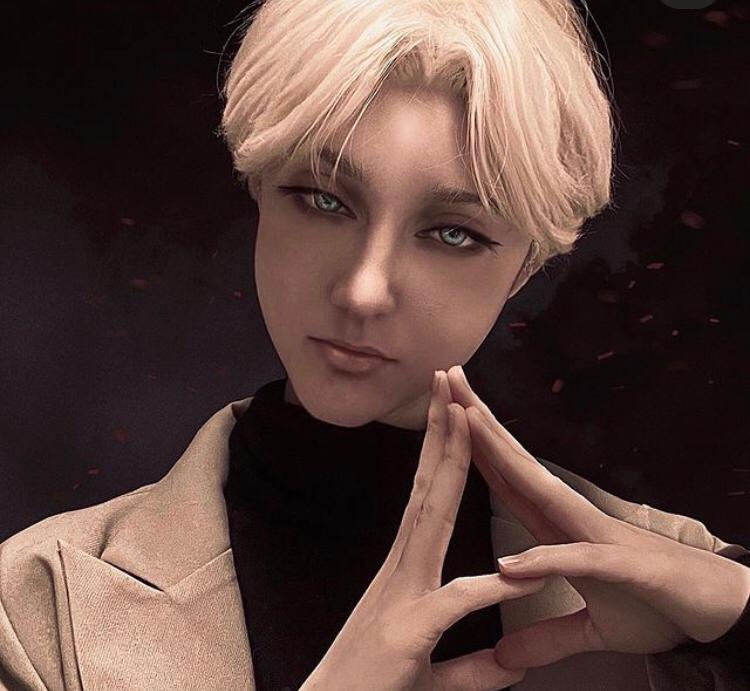 Phil is one of those cosplay artists who believe in telling a story with simply a click, and no matter what character this artist dresses up as, you best believe it is going to be top-notch! And same can be said for the Johan’s cosplay. Can we take a step back and just appreciate how precise and legit this cosplay is? Everything from the signature-styled blonde hair to the high cheekbones screams Johan in real life. The artist sure put in the effort to make the character look as genuine as possible and we are obsessed! 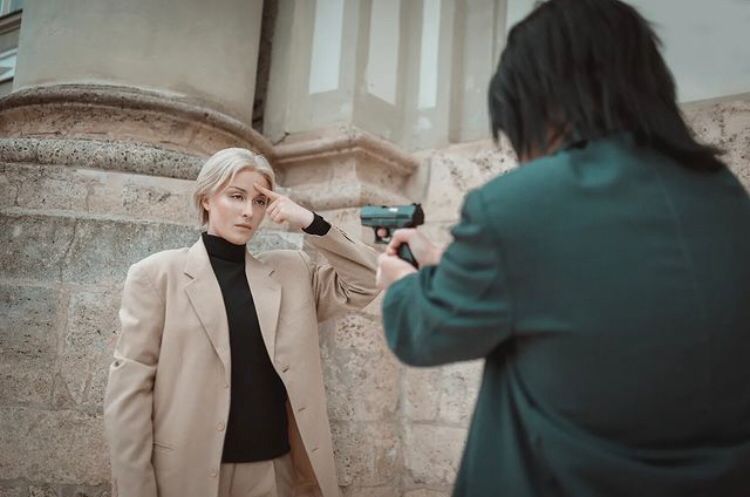 The evergreen scene of Tenma pointing a gun at Johan

Smi is a professional cosplay artist with an impressive count of 101K followers on Instagram. The cosplayer has dressed up as some of the best anime characters and did a wonderful job at that. From Sakura (Naruto Shippuden) to Sanji (One Piece), Smi has dressed as all. Smi dressed up as Johan to showcase the INFJ personality type characters and we respect this creative idea. The cosplay itself is quite impressive too. The costume and the wig have definitely been carefully chosen. HATS OFF! 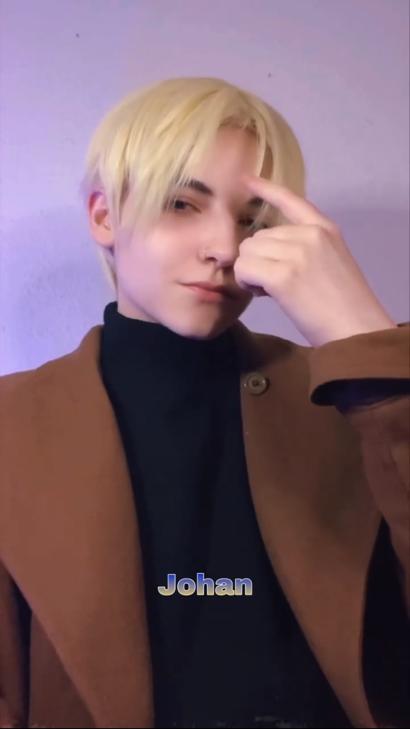 the finger on the forehead to show no value for life

Paranoic rat is a wonderful cosplayer. They create all of their cosplays with such realism. The costume, the shoots, and the editing are all done by them, and the results are marvelous. The Johan cosplay deserves to be one of the top mentions in this list since it really is that good. The cosplay artist has definitely put in all the blood, sweat, and tears to make Johan come alive through their display. The costume is pretty faultless. The expression in the pictures brings out the true nature of the character, and we literally cannot take our eyes off it. 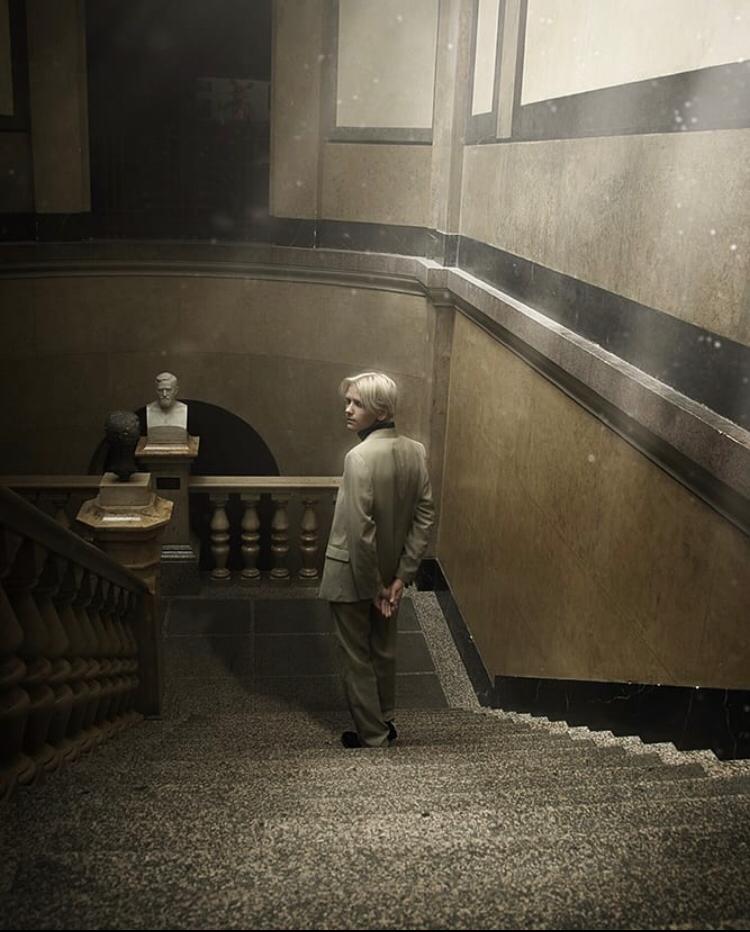 Johan Liebert on a staircase.

Dev is an artist, gamer, and cosplayer. This budding cosplayer has over 4K followers on Instagram. Dev’s cosplays are absolutely splendid. They are so detailed and realistic. It’s almost like he is the character. Dev’s Johan cosplay definitely deserves to be at the top of this list. 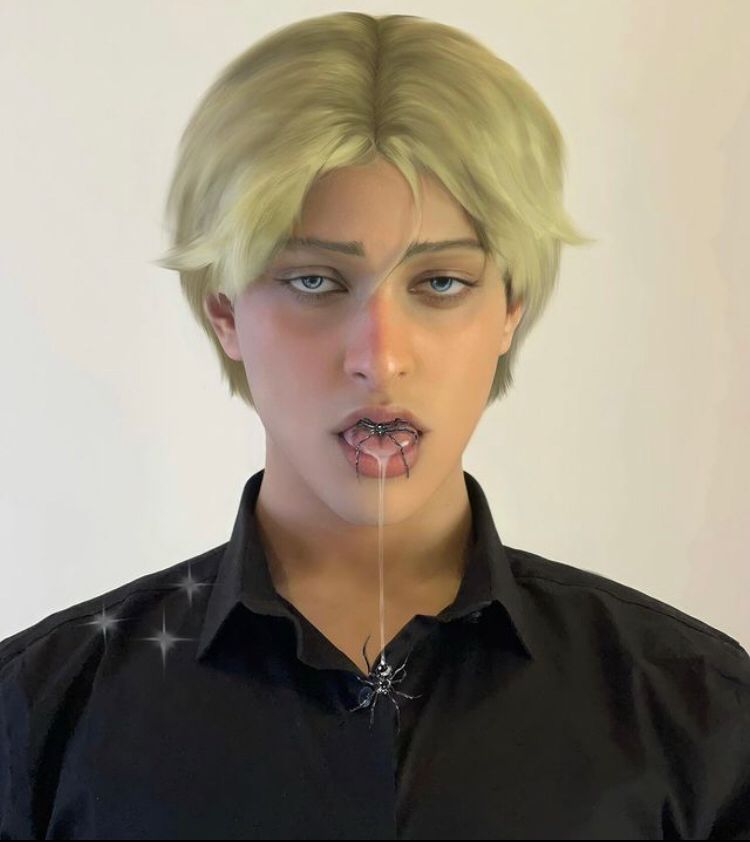 Unlike all the other cosplays we came across, Dev’s stood out the most. Maybe it was the non-conventional pose the artist opted for or the out-of-the-world detailing. Perhaps it was the precise facial expressions. All in all, everything about cosplay is perfection. 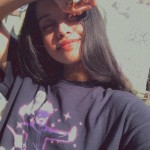