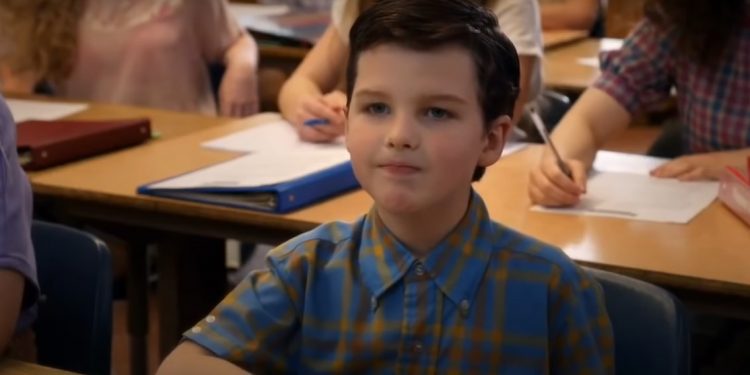 Young Sheldon Season 5 Episode 11 will be full of surprises. Because Sheldon will spy on Mary during Church service. First, this “The Big Bang Theory” spin-off prequel on the life of physicist Sheldon Cooper as he embarks on his high school and college studies in the late 1980s and 1990s in Texas. Also, if you’re familiar with The Big Band Theory, you’ll find that this series will make you laugh and understand a little better why Sheldon is so weird!

Young Sheldon is produced by Steven Molaro, Jim Parsons, Chuck Lorre, and Steve Holland. Moreover, it’s a Warner Bros. and Chuck Lorre production. And a very successful one. The hilarious adventures of a Young Sheldon in the early nineties are chock-full of pop culture references, quirks, and cultural gags that make up the character we got so used to seeing in The Big Bang Theory. Now, without any further ado, let’s begin covering this topic here at Otakukart.

In the next episode of Young Sheldon, we will see our physics prodigy conduct an espionage campaign on poor old Mary. It turns out that for some reason —one which the chapter unfolding will tell us— there’s a lock-in at the local church. And Sheldon finds no better thing to do than to peek against the wishes of the churchgoers. What is Sheldon doing next? What quirky argument can he possibly come up with to cringe on this faith, people?

Sheldon is given his own dorm room due to a four-hour gap around his classes. When he runs into classmate Sam once more, he complains that he is treated unfairly and that no one likes him because of his arrogance. Sheldon decides to conduct an experiment after speaking with Dr. Sturgis about humans being social creatures. After allowing Sam to study in the room, word gets around that Sheldon has a spare room. He lets couples use it to study, despite the fact that he has no idea why they want it.

When his parents discover it, they inform him that it is being used to waste time, persuading Sheldon to stop lending it out. Meanwhile, June wins $11000 thanks to a glitch in the slot machines. Connie is forced to become a partner in her casino business because she is unable to pay it. June and Georgie are supportive of one another’s plans for the space. Connie tries to persuade Georgie to change his mind, but he says Connie despises anything that isn’t about her. Georgie adds a small disco ball, which enrages Connie even more.

Where to Watch Young Sheldon?

If you wish to watch Young Sheldon, simply tune in to CBS at the airtime. Alternatively, you can watch the installment on CBS’ official website. The episode is also available on Paramount+, FuboTV, YouTube TV, Xfinity, Hulu+Live TV, and DirecTV for cord-cutters. If you have an HBO Max subscription, you can watch the show’s previous seasons right here. ‘Young Sheldon’ episodes and seasons can also be purchased or rented on Spectrum, Microsoft Store, iTunes, Amazon Prime Video, Google Play, or Vudu.

Young Sheldon Season 5 Episode 11 will release on January 13, 2022, at 20:00 Eastern Time, via CBS Network, United States. Firstly, each new episode airs on Thursdays. Secondly, every chapter has a run time of thirty minutes. Third, this episode’s title is “A Lock-In, a Weather Girl and a Disgusting Habit”. Additionally, the episode was directed by Alex Reid out of a story by Steven Moraro, Connor Kilpatrick, and Nick Bakay. With this, we wrap up our coverage of Young Sheldon here at Otakukart. Thanks for reading our piece, and please keep coming back to our website for daily updates on all your favorite programs.