She has enjoyed her time as Dr. Kang but it looks like she can land up in deep trouble because her sister has returned to Korea. 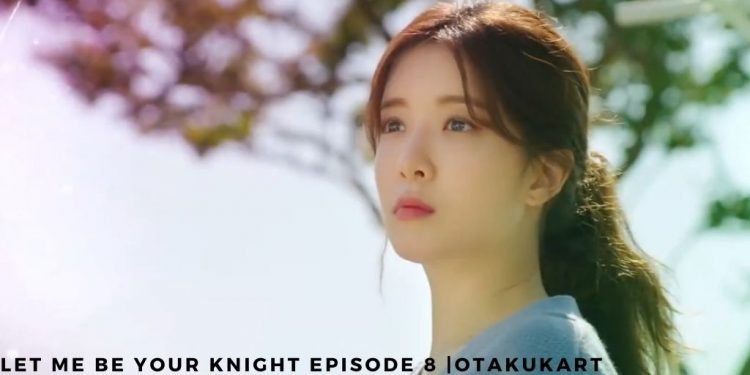 Let Me Be Your Knight Episode 8 is coming soon! The audience has been swooning over Tae In and Yoon Joo’s awesome chemistry. Everyone’s heart skipped a beat when back hugged Yoon Joo. However, not only did the audience’s heart skip a beat but Yoon Joo’s heart couldn’t stop thumping. And later on in the episode, fans got even more content. Yoon Joo had tagged along with Tae In to one of his winter photoshoots. Thinking that she was a staff member, the director of the shoot created a big scene. He first told Yoon Joo to clean up his table after which Yoon Joo accidentally dropped some coffee on his pants. Because of this, the director got very angry at her and pushed her even though she apologized. That’s where Tae In stepped in.

He told the director to humbly apologize to her after the shoot had finished he called her to the ice rink. The two were couple goals when they were ice skating together. Like children, they played catch and had a lot of fun. To make things even better, during the green home concert, Tae In decided to perform a song that ae In had recommended him to do. After the concert, he even called Yoon Joo. Guess what, they talked for a whole hour straight. All of this makes fans ask when are they going to confess? But it looks like their confession wouldn’t be coming soon because Yoon Joo’s identity reveal is coming soon. Don’t miss out on the big reveal and check out the release date, streaming details, and predictions for Let Me Be Your Knight Episode 8.

Let Me Be Your Knight Episode 8 Release Date

The release date of Let Me Be Your Knight Episode 8 is December 26, this Sunday. The kdrama updates the audience with new episodes every Sunday at 11:05 PM on SBS.  Sadly, fans get only one new episode per week and are left with big cliffhangers. However, they simply love the k-series as it somehow relieves them of their stress. Maybe the beautiful music and OSTs of the kdrama have to do something with it. From Because Its You, Your Bright Smile Is On The Clouds In The Sky, and Dreaming. In addition to that, everyone thinks that if LUNA was a real band they would’ve stan them. The fictional band has created some great songs like ‘Let Me Be Your Knight’, ‘Beautiful Breakup’, and more. Certainly, this kdrama is a true gem.

Where To Watch Let Me Be Your Knight Ep 8?

The Korean audience of the K-series can watch the episodes at 11:05 PM on Sundays on SBS. Let me Be Your Knight or Idol Doctor has been trending like crazy among international fans. The international viewers of the kdrama can watch Let Me Be Your Night Episode 8 on Rakuten Viki with a standard subscription. Furthermore, the release time of the 8th episode of Let me Be Your Knight in the US is 9:05 PM, in the UK is 2:05 PM, in Canada is 9:05 AM, in India is  7:35 PM, and in Australia is 12:35 PM. Now, don’t forget to mark your calendars!

It looks like Yoon Joo’s real identity is at stake in Let Me Be Your Knight Episode 8. Even though it is Woo Yeon who thinks that something is off with Dr. Kang, fans are still anxious. In the preview, he could be seen telling her that they had met each other even before she decided to treat Tae In. The audience feels sad just by thinking how betrayed the members of LUNA would feel that Yoon Joo is actually the twin sister of Dr. Kang who took up her sister’s job because she wanted to pay off her debt. In fact, they could imprison her. Now, that the real Dr. Kang has returned to Korea, the audience can’t stop thinking about what might happen next!

Besides that, from the preview, it looks like, a rift will be drawn between Tae and Yoon Joo in the upcoming episode. When Tae In was asked whether he likes Yoon Joo or not, Tae In tried to hide his feelings said, ”Why would I ever like her?”, and Yoon Joo heard all of this. Fans simply can’t wait to see what is in store for them in the coming episodes!

Also read: 8 Spectacular Kdramas Of IU That Prove She Is A Talented Queen