Woong finally agrees to work on the 'Soen shop' project but to do so he keeps a condition. The artist wants Yeon Soo to work in the documentary with him and the reason is because she hates the idea of it. 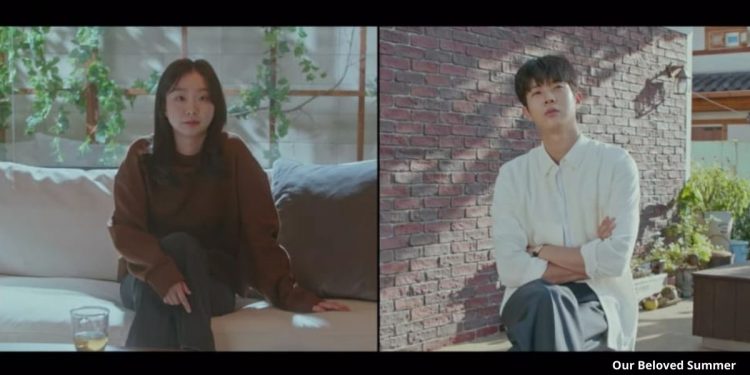 Yeon Soo and Woong never thought their paths would cross again after their breakup. Surprisingly, the only people they see around nowadays are each other. They both act childish sometimes making rude comments on each other. Even though Woong rejected Yeon Soo’s offer to work on the ‘Soen shop’ he is now reconsidering his decision as the group is thinking of bringing in the artist Nu-a. In ‘Our Beloved Summer’ episode 5 we will find out if Woong will devise an evil plan to make Yeon Soo suffer?

Also, there is a big surprise waiting for Yeon Soo at the office the next day her colleagues are very happy and they congratulate her. She is confused about the event but then her boss clears it out telling her that the artist Ko-o has agreed to work on the ‘Soen Shop’ project. But Woong has a condition for Yeon Soo which will make her crazy. Read the article to find out all about what happened till now.

What Happened In The Previous Episode

Till now we have seen that Woong and Yeon Soo are forced to come together again after 10 years. This is because a documentary they shot in high school has become the most searched video all over the Internet. Also, this will begin the journey of bickering, fighting, and rekindling past emotions. As the remake of the documentary starts Woong is asked to come up with 10 things he hates about Yeon Soo and he has a lot to say. He sees Yeon Soo as a stuck-up person who always wants to win. She is self-centered and wants everything to go according to her. Also, she has no sense of romance. These things have always troubled Woong when they were dating.

As the youth pond over the ‘Best student, worst student’ video Lee Sol Yi, and Koo Eun Ho get into a virtual fight. They keep commenting on whose friend is more successful. As Yeon Soo is walking with Sol Yi she suddenly tells her that she met Woong. But her chilled attitude about the matter makes Sol Yi think that her friend still has feelings for her ex.

NJ and Woong visits her properties

After making NJ wait for many days Woong finally calls the star. She is very excited and pretends to be busy so that he won’t suspect that she was waiting for his call. Even though the idols have the busiest schedules Woong wouldn’t agree to draw for NJ until he has seen the buildings. We know that NJ likes Woong so is he playing hard to get or he is not interested in her?

When Ji Woong pursues Yeon Soo and Woong to make another documentary they both instantly reject the idea. Woong does not want to work with Yeon Soo because of how she broke up with him. After the breakup Woong went crazy and did everything Yeon Soo hates. At the time he acted like he has given up on life. Now that Yeon Soo and Woong’s paths have crossed once again they coincidently keep running into each other.

Ji Woong pursues Yeon Soo again and tries to change her mind about working in the documentary. As Ji Woong is working hard on convincing Yeon Soo, NJ is wondering why Woong hasn’t called her? Also, when Yeon Soo arrives at the office the next day she finds out that the artist Ko-o has agreed to work on the ‘Soen Shop’ project. She is shocked to hear this but later finds out that Woong will work on the project only if she agrees to work in the documentary. ‘Our Beloved Summer’ episode 5 is going to be epic as the shoot for the documentary starts.

The ‘Our Beloved Summer’ Episode 5 will release on 20th December 2021. As the shoot commences Yeon Soo tries to be mature and get along with Woong. Although the hurtful emotions are still there. Everyone thinks that Yeon Soo did not suffer when she broke up with Woong but the truth is opposite to it.

Where To Watch ‘Our Beloved Summer’ episode 5?

The South Korean drama ‘Our Beloved Summer’ is a television series that is broadcast by the SBS network. New episodes of the drama are released every Monday and Tuesday. So people living in South Korea can watch the upcoming episodes on the official broadcast network. As for international fans they can watch the ‘Our Beloved Summer’ episode 5 on the international streaming platform Netflix.