Will Tengen Uzui Die in the Entertainment District Arc? The Fate of The Sound Hashira 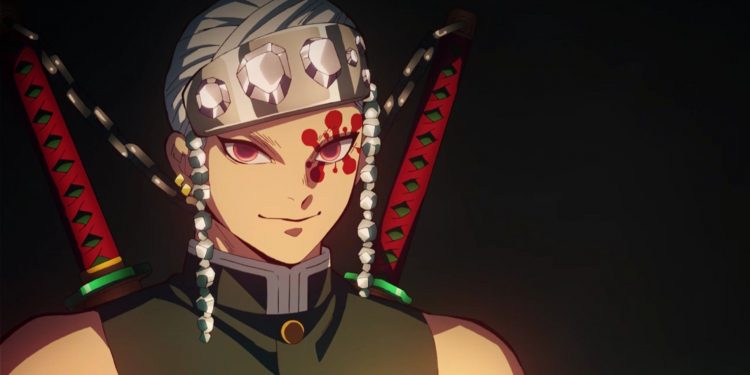 Ever since the tragic ending of the Mugen Train movie, we have been eagerly waiting for the upcoming Entertainment District arc. From the trailer, it’s pretty clear that the Sound Hashira, Tengen Uzui will be Tanjiro’s new mentor now. Although the Entertainment district is all about glamour and flamboyance, I can’t help fearing that Tengen may end up sharing the same fate as Rengoku. Not only me, but fans all around the world are also wondering if Tengen Uzui will die in Demon Slayer Season 2.

Not to mention, the article you are about to read will dive deep into Tengen’s upcoming adventure and will be full of manga spoilers. So, just in case you are an anime-only fan, go ahead at your own risk. We bring every detail about Tengen’s destiny in the Demon Slayer series. Will he die in the hands of a Demon? Or will he pass on his responsibilities to some other capable hands?

Tengen’s Fight With Gyutaro and Daki

Let’s just start with the infamous fight between Tengen and Gyutaro that took him to the entrance of death. Months after Rengoku’s death, Tengen infiltrated the Entertainment District to kill the Upper Moon demon hiding in the shadows. His suspicion was absolutely precise as he came across Gyutaro and Daki, the brother-sister duo that jointly holds the sixth position in the Upper Moon ranks.

Well, Tengen is no Rengoku, not even close to how strong the Flame Hashira was. And yet, he didn’t sweat a drop before slicing off Daki’s head from his body. Being the master of Sound breathing (derived from Thunder breathing), he can analyze his opponent’s movements like a series of vibrations and act accordingly. However, the tables turned when Gyutaro jumped into the fight and tried killing everyone with his pair of poisoned sickles.
In the fight, Tengen got hit by the poisoned sickle time and time again.

Thanks to his ninja background, he had quite an immunity from poisons. But as you know, even the toughest rocks break under pressure, and so did Tengen. The poison started affecting his body gradually and almost took him to the end of his endurance level. He even resorted to stoping his heartbeat to stop the poison from spreading all over the body. If not anything else, that reckless move of stoping his heart surely filled Gyutaro’s heart with the joy of killing the Sound Hashira.

Thankfully, Tengen Uzui didn’t die in the fight. All credit goes solely to Nezuko’s unique Blood Demon Art flames that got rid of the poison from his body. However, by the time the fight ended, Tengen had already lost an eye and an arm. There’s no way he could have continued his work as a Hashira in such an awful state. Totally ignoring Obanai’s advice, Tengen Uzui retired from his duties as a Hashira.

Much like the Attack on Titan franchise, Demon Slayer is pretty casual in disposing off our favorite characters. The fact that Tengen survived the Entertainment District arc is really a relief. Taking retirement was a very logical decision from his side. He would have surely died if he had to face another Upper Moon without an eye and an arm. Things were only going to get uglier, so it’s better to step aside before it’s too late.

Who Will Replace Tengen Uzui?

Tengen knew that his absence would be replenished by Tanjiro, Inosuke, and Zenitsu. He had complete faith in the new generation of Demon Slayers, and he passed on his legacy to them. Moreover, Inosuke has similar beastly energy like Tengen and uses two swords just like him. He is the most suited successor of our retired Sound Hashira.

Tengen and the new generation of Demon slayers won’t be surprised to see Inosuke growing up to become an eccentric and flashy Hashira like Tengen was. Much like Rengoku, Tengen’s battle with Gyutaro and Daki will serve as an example to all. It will remind them of the selfless sacrifices that were made to kill the first Upper Moon 6 Demon after 113 years.

Also Read: Will Iguro Obanai die in Demon Slayer? The Fate of The Snake Pillar