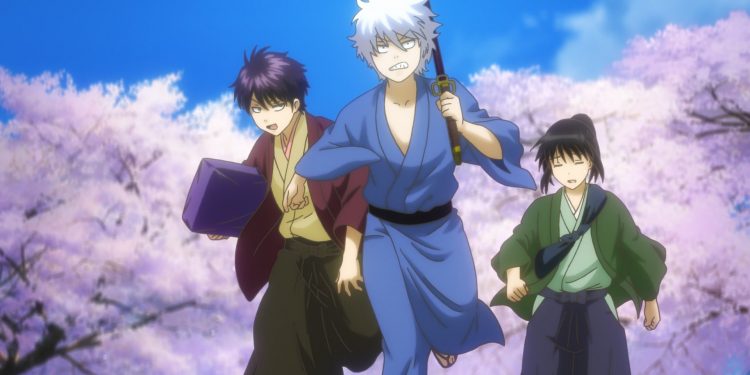 Takasugi, Gintoki and Katsura As Kids

The position of a villain is dicey when it comes to anime. There are times where the villain meets with a gruesome death and other cases where they just become the hero’s allies. So, Will Takasugi Shinsuke Die? or Will he become an ally? That, my readers, is not as simple as it seems. Gintama stands out from the generic hero-villain storyline and adopts a more comedic and relaxed attitude to storytelling. This stays true until the last arc, where a lot is revealed about Gintoki’s past. His past discloses various events like his rivalry with Takasugi, his relationship with Yoshida Shouyou, and his involvement in the Joui War. If you want to dig deeper into Gintama’s story and character development, you can check out the manga at VIZ or check Season 1 at Hulu.

Takasugi Shinsuke is a recurring antagonist in Gintama, and it stays that way until the final villain, Utsuro, appears. He is based on the Takasugi Shinsaku, a 19th Century Japanese samurai who is known for his contribution to the Meiji Restoration. Shinsuke was Gintoki’s ally during the Joui War and fought together to free their captured teacher. But a certain event impacted Takasugi so much that he started going down a dark and chaotic path. Takasugi is a skilled swordsman whose power can only be rivaled by a few people like Gin. He was so strong that he earned the title of being one of the ‘Four Heavenly Kings’ alongside Gin, Sakamoto, and Katsura.

Even with his few initial appearances, a lot can be said about him. He was born in a lower-class family and often got into fights with the siblings of his classmates. This eventually led to his only friend, Katsura, being in danger but eventually being saved by Yoshida Shouyou and Gintoki. Intrigued by their strength, Takasugi visits Shouyou’s school and gets encouraged to become as strong as Gin. This led him to constantly challenge Gin to duels, sometimes even before his old wounds healed. His parents disapproved of him hanging around the school, but he never heeded their warnings.

After defeating Gin once, he had visited the school so many times that he eventually joined there. During the Kansei Purge, their teacher gets arrested, and Gin, Takasugi, and Katsuya decide to join the Joui War to save him. After being captured, the trio was forced to watch their teacher being beheaded, and even worse, Gintoki was the one to do it. When the enemies left, they buried the bodies of their comrades and their teacher’s head and went their own ways.

This marked the beginning of the dark phase of Takasugi’s life. His teacher’s death caused him to be unable to accept the world itself. This was because he could not acknowledge a world that took his teacher from him. Ever since then, he worked for ten years and revived the Kiheitai in order to destroy Japan. He also started to hate Gintoki due to Takasugi being unaware of the condition placed on Gintoki. Later, both Gin and Takasugi knew that his hatred was because the latter believed that he was too weak.

Yes, Takasugi Shinsuke does die, but not just a generic death. He dies both literally and metaphorically. Until the Shogun Assassination Arc, Takasugi only cared about destroying the world and Gintoki as only Gin was capable of stopping him. This was his means of coping with the death of his master, who he was too weak to save. Unlike Gin, Takasugi externalizes his pain and adopts a ruthless attitude where he views other people only as pawns in achieving his goals. But his fight with Gintoki, his alter ego, cleared all doubts in his head and made a complete change in him. Takasugi had understood what it meant to respect the dead, that it was only through moving on and honoring Shouyou’s teachings. This was his metaphorical death.

In the final battle with Utsuro, Shouyou’s original identity, Takasugi takes in Shouyou’s blood so that he can bring back his master. But this very blood was his undoing. Utsuro took this opportunity to take over Taksugi’s body and face Gin in a final battle. But Takasugi was not the one to go down so easily. Earlier, Takasugi had not stabbed Utsuro but himself, which affected Utsuro later against Gintoki. Finally, Gin slashed Utsuro and sat down while Takasugi was dying in his arms. Gin felt disheartened, but it was necessary to liberate Takasugi from Utsuro as well as his destructive ways.

10 Anime Similar to Mieruko Chan That You Should Check Out