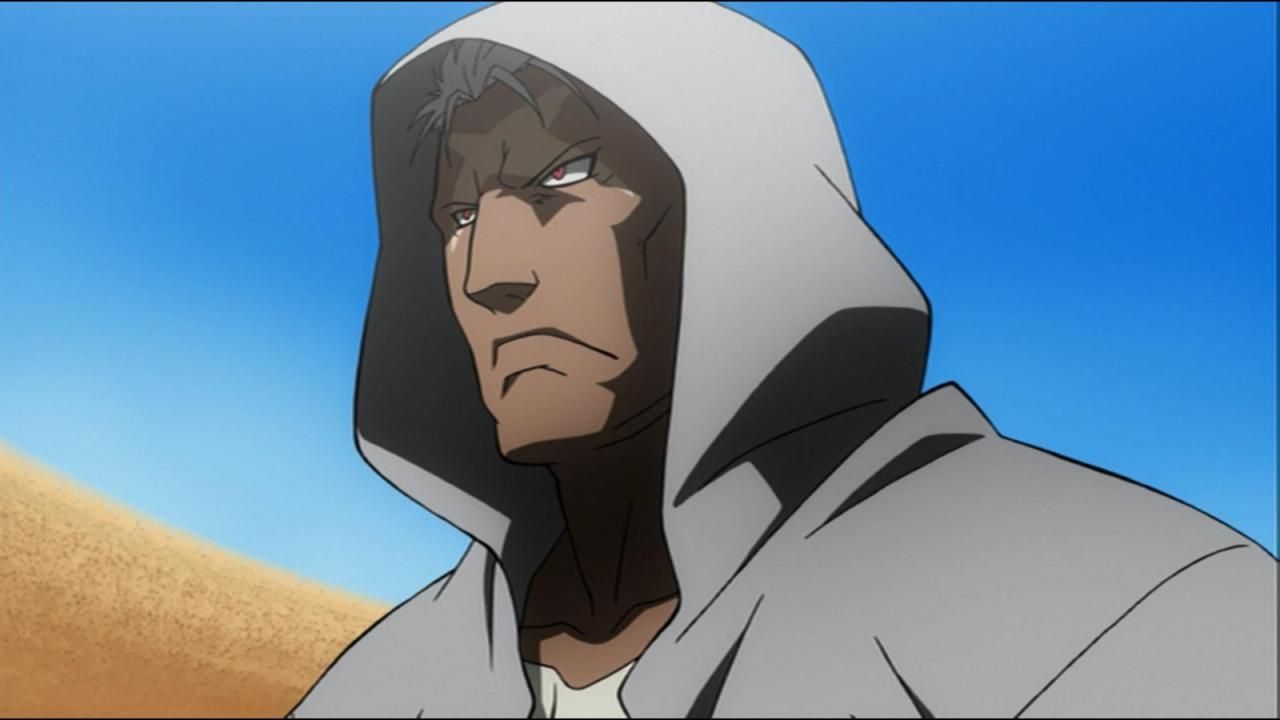 Scar is an anonymous lone serial killer and vigilante who targets State Alchemists for his own brand of fatal justice in accordance with his faith’s core principles and as retribution for the murders of his loved ones. Scar is an Ishvalan Civil War survivor, and he also has an X-shaped scar on his forehead and a massive and complicated alchemical tattoo on his right arm that actually belonged to his older brother and that he employs as his primary murder weapon.

Scar has the dark skin and unusual crimson irises of an Ishvalan native. His hair is cut short on the back and sides, leaving a silver-colored crown on top, and he is pretty tall with a strong frame. This crown stands up a little in the manga and the 2009 anime plot, but it is flat and spread out in the 2003 anime series. Scar’s right arm is graced with a small scar that runs the length of the limb, from the bicep to the shoulder, and is virtually covered by a complicated tattoo from that point all the way down to the wrist. A massive X-shaped scar across his forehead, down over his eyes, and into his high cheekbones disfigures the upper section of his face.

In the first anime, he dies, however in the second anime, he does not. Kimbley performs a transmutation on Alphonse in the 2003 anime FullMetal Alchemist while in Lior, causing his armor to progressively change into an explosive material. Kimbley intended for Al to detonate once he’d been totally transformed into it. Scar intended to use the city’s military personnel to execute a transmutation in order to obtain the Philosopher’s Stone. He then intended to save Ishbal with the stone. Instead, he meets Alphonse and discovers what Kimbley has done. Scar is touched by the events surrounding Kimbley’s murder of his brother. He doesn’t want Ed to lose his brother, so he participates in the transformation by putting the Philosopher’s Stone within Alphonse’s armor, transforming Al into a living Stone. 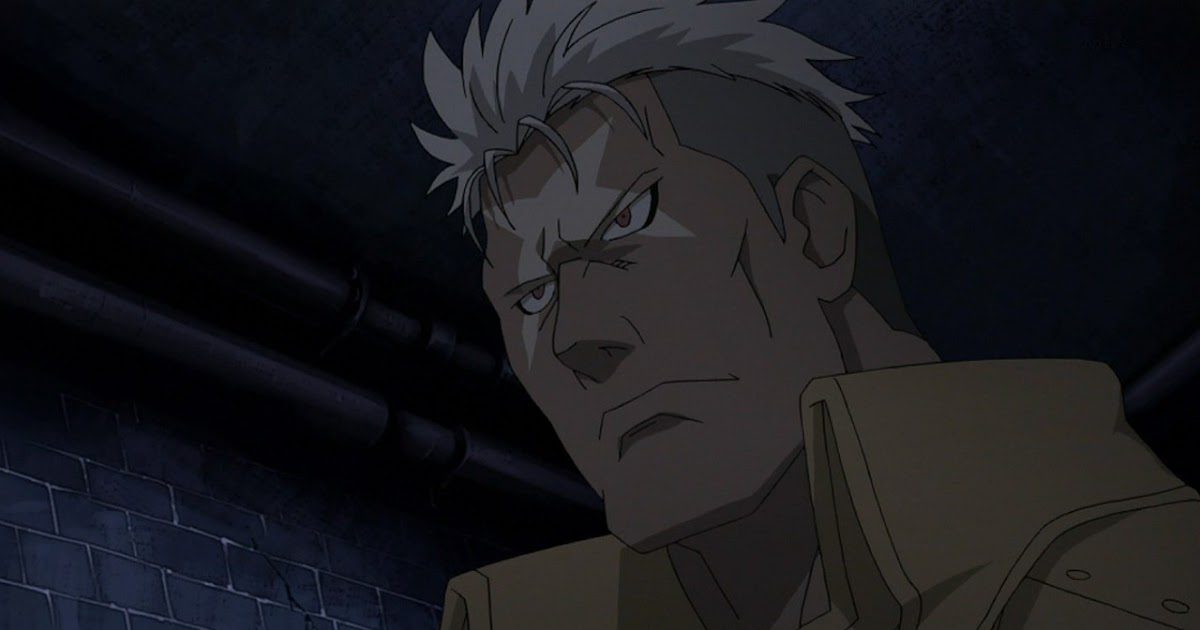 Because Scar’s elder brother was the one who found how to reverse the Philosopher’s Stone transformation, he ends up helping Ed, Al, Mustang, and his soldiers save Amestris from Father in the 2009 anime. He enlists the cooperation of Ishvallans to help him set the circle’s points across Amestris. He throws off the moniker “Scar” at the end of the series, declaring that he doesn’t need one. He then starts working with Major Miles to develop Ishval-Amestris ties.

Scar, a former Ishval warrior-monk, is an expert in hand-to-hand fighting, with great strength and stamina, incredible agility and reflexes, and deceptive speed, as seen by his ability to dodge bullets. Though he appears in the 2003 anime as a youthful armed warrior during the war, he demonstrates his talents on the battlefield in the manga by subduing a group of armed Amestrian troops using just melee techniques. Scar’s assassination spree across Amestris showcases his talents, as he kills ten State Alchemists (including Basque Grand, a renowned fighter) He can hold his own against combat-oriented alchemists such as the Elric brothers and Alex Armstrong.  In addition, he demonstrates his ability to defeat monstrous animals such as chimeras and Homunculi. Most impressively, he managed to win a pyrrhic victory over a critically wounded Wrath by a mix of chance and skill. 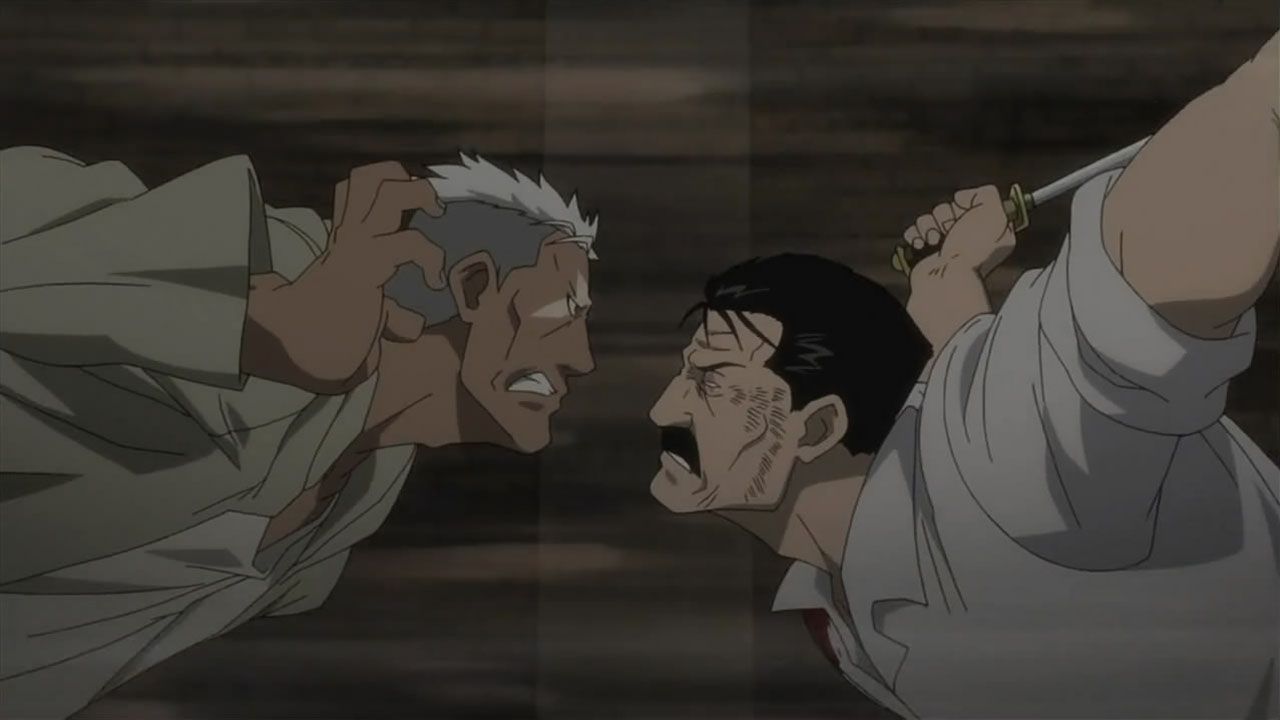 Scar is also clever, capable of comprehending sophisticated and advanced alchemical writings and concepts despite never having studied the trade, and a good strategist capable of finding and analysing his opponents’ vulnerabilities in combat. Scar’s most hazardous feature, aside from his physical strength and scary appearance, is his right arm, which, because of the complicated and esoteric Transmutation Array tattooed on it, is capable of destroying everything with which it comes into contact. Scar does not consider himself an alchemist in the classic sense since he is a fundamentalist opponent of alchemy, but the strain of alchemy that his arm allows him to make is powerful, sophisticated, and unique. Scar’s approach follows the cyclical flow of transmutation but only considers the first two phases – understanding and deconstruction, according to those who have witnessed it in action and lived to tell the tale.

Also read: How Many Episodes Does Fullmetal Alchemist: Brotherhood Have?