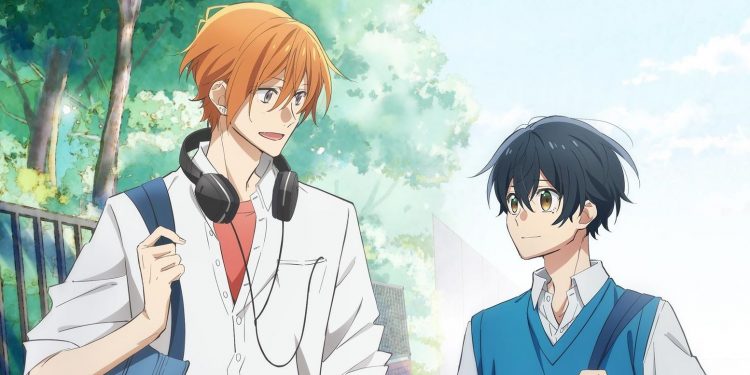 The BL manga “Sasaki and Miyano” has gained a lot of popularity since its first release as people seek to know if the protagonists do get together or not. This manga is definitely one that will make you feel many emotions as you keep gazing through each panel. It may also make you feel understood as the characters are relatable – I mean, Miyano literally reads BLs for fun – RELATABLE! In all seriousness, this manga does explore the feelings of each of the main characters and captures them very well. The main characters are patient, thoughtful, and take their own time with love. Even though they are in high school, these protagonists take on a very mature path and look at love. They question not only the partners but also their feelings before making decisions.

It is because of this; the manga gets a slow-burn vibe to it to the point where it makes us question whether Miyano and Sasaki get together or not. In this article, let’s explore their relationship a little to find out. “Sasaki to Miyano” is a Japanese manga under the BL genre. It was created by Harusono Shou. It tells us the story of a high-schooler who enjoys reading blogs and of another boy who is interested in the interests of the former. This manga has about seven volumes released so far.

The main characters in this manga are very different from each other. Sasaki is the tall, popular guy, and Miyano is the short, timid guy. However, what ties them together is BL manga and Sasaki’s interest in Miyano. Although being small in physique, Miyano has extremely pretty features. This is an aspect that creates conflict in Miyano’s life.

Sasaki and Miyano did not get to know each other when they met for the first time. Miyano watched a fight take place but couldn’t step in to help out. He called for an upper-class friend to help out, but Sasaki caught his attention. Sasaki then stepped right in to resolve the fight. They began talking more to each other after they met again on the train. From here on, Sasaki starts showing immense interest in what Miyano does. He is even curious about Miyano’s hobby of reading BL manga and even asks for recommendations.

Sasaki soon reveals to Miyano that he has liked him for some time now, but Miyano asks him to wait. Like I mentioned above, Miyano thinks that Sasaki only likes him because he looks like a girl, but that isn’t it. So, as Miyano began questioning his own feelings, Sasaki patiently yet insecurely waited for Miyano to give him his answer. When Miyano finally recognizes his feelings towards Sasaki, he is again conflicted about confessing as he isn’t sure of Sasaki’s feelings.

The story so far, thus, creates a situation like right from Jane Austen’s books. Sasaki grows impatient with his intense feelings towards Miyano, while the latter doesn’t know how to express these feelings to Sasaki. If done right, they would’ve been together earlier. However, I think this conflict was necessary as they both explored not only each other’s feelings but also overcame their insecurities.

Yes, Sasaki and Miyano get together! It is by the end of the 6th Volume when Miyano tries to find the right time to let Sasaki know about his feelings and when Sasaki finds it difficult to be patiently waiting for Miyano’s answer.

This is also the time when Sasaki is close to graduating from high school. It is kinda sad that as a couple, they have only a few days together in high school, but with whatever time they have left, they make the most of it. I mean, it is better to start something late than not start at all. As Valentine’s Day approaches, they plan to make chocolates together. It is also this time when their friends find out that they are dating and are supportive of it.

Volume 7 is the most emotional one out of them all as it shows Sasaki and his sister’s relationship. When Sasaki comes out to his sister, they engage in a lovely conversation that makes them bond. Sasaki then is all set for his college life as he graduates. Although it was time for him to leave school, he didn’t leave Miyano. This is a new beginning not only for Sasaki but for Miyano as well.

Currently, the manga is on hiatus. When it returns, we will hopefully get to see Sasaki and Miyano together in their college life. But fortunately, there is good news for us.

It was announced that this beautiful manga would get an anime adaptation. It will be animated by Studio Deen and will come out in January 2022. This adaptation will give this manga not only colors but also some bright visuals. Look forward to this amazing story!