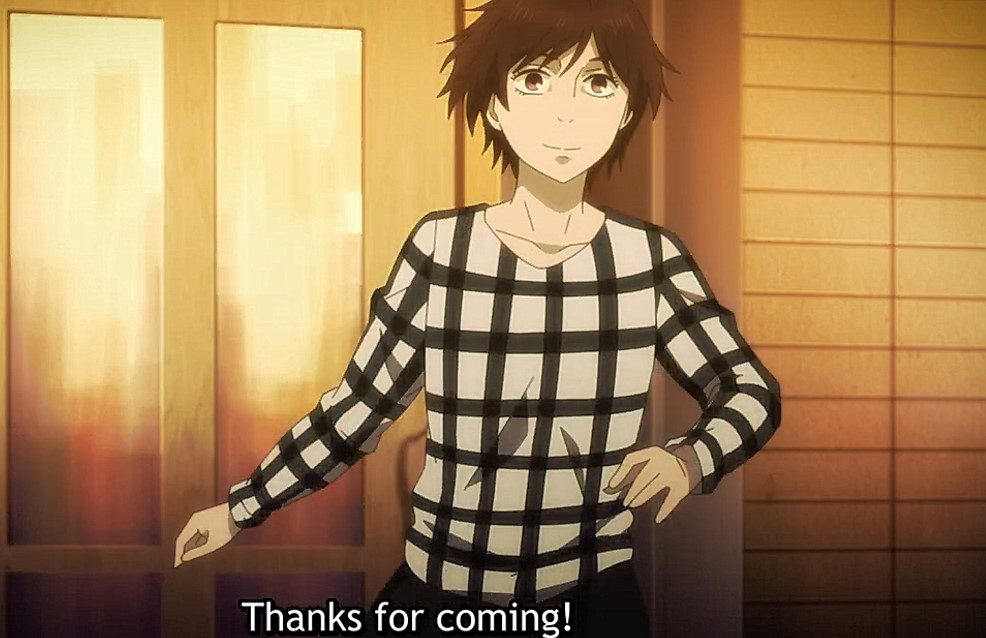 The Night Beyond the Tricornered Window Episode 10 reveals Mikaido and Rihito trying to get rid of the Evil Spirit within the teacher’s house. After failing to invade the teacher’s house, Mikaido and Rihito’s souls return to their natural bodies and decide to do that next time. Erika argues with her mother. Sakaki tries to find the head of the family. From The Night-Beyond-the Tricornered Window’s latest episode, the teacher arrives at his office and finds Sakaki, Erika, and Erika’s mother. They tell him that Erika’s father didn’t come home.

The mother knows that Erika’s father was supposed to arrive at the teacher’s office. The teacher tells that Hiura and Matsui are not around, but he doesn’t see any notes. Erika’s mother thought that the teacher knew something and the husband must have left the letter. Sakaki realizes that the teacher will not help them and tells him that they are leaving. The teacher saw Erika and thought that she was taking good care of Sakaki. He holds Sakaki on a rear neck choke.

The teacher asks him to reveal what he has done to Erika since he knows that Erika was possed by an evil spirit. His nose bleeds, and Erika tells him to let go of Sakaki. But Erika’s mother notices that the teacher will never do that and shocks him with a stun gun. She tells Erika to leave, but Erika wants to know something from Sakaki. Erika realizes that she has promised to help Sakaki whenever he is in danger. She rolls Sakakai on the ground and uses O-Death Spell that she learned from Mikaido. Sakaki wakes up after Erika cuts the thread of evil spirit within him.

Previously on The Night Beyond the Tricornered Window Episode 9

Sakaki wonders what miracle did Erika do on him, and Erika says she made it in time. Erika’s mother gave her something and told her to leave the building with Sakakaki. Erika wonders if her mother is afraid of her since she got rid of the evil spirit. Her mother admits that she is afraid it doesn’t matter since she is her daughter. The teacher show signs of waking up, and Erika’s mother tells the two to leave. She decided to deal with the teacher as the two escaped.

The rain began pouring, and Sakaki with Mikaido managed to make it outside. They managed to find the car that Erika’s mother left for them. Erika finds a picture that has a message from her mother. Sakaki decided that they should go to that location, and that is when they would be safe. On their way, Erika wished her mother would have saved her sooner since they left without her. Sakaki tells her not to be scared since fear is a poison thought to get rid of, and Erika cries for her mother. They arrived at the hotel and decided to stay for a night.

Sakaki reminds Erika that the next day when they wake up, the world will be in chaos. Sakaki returns from the store in the morning, and Erika tells him that she is not scared and ready for the battle. Mikaido and Rihito work on the letter of people who need their help with dealing with evil spirits. Mikaido realizes that they have a lot of work, and Rihito thinks they should not have waited for work to be that big. They read Erika’s letter and called her. They decide to help her deal with evil spirits.

The Night Beyond the Tricornered Window Episode 10 Release Date

The Night Beyond the Tricornered Window Episode 10 will be released on 5 December 2021. Rihito talks about money and power that are causing harm and decides to take that. Mikaido thinks that he has a better way, and Rihito thinks that his solution is better. Mikaido helps the other lady solve her problems, and she tells him about her past. They talked about a lady who died on the pond, and Mikaido thinks everyone deserves to be saved. Let’s look at The Night-Beyond-the Tricornered Window Episode 10 official details.

Tags: The Night Beyond the Tricornered Window
ShareTweetShareSharePinSend
Previous Post