Will Reiner Braun Die in Attack on Titan Final Season? The Fate & Death of Armored Titan

Will Reiner Braun die in the Battle of Heaven and Earth? Will he lose the powers of Armored Titan in Attack on Titan Final Season? 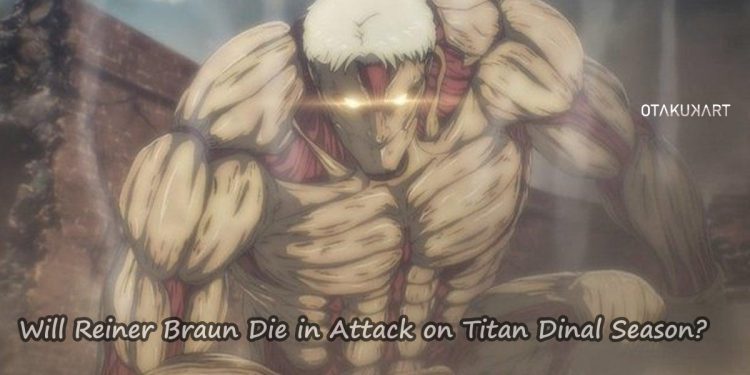 Reiner Braun is basically the protagonist of Attack on Titan from the Marleyan perspective. Much like Eren, he kept moving forward according to the idea of righteousness he believed in. In his story, he is the hero who saw eradicating the Paradis devils as the only way to end this cycle of cruelty. Throughout the series, he went through many near-death situations and other hardships before which death feels like a luxury. He even tried committing suicide since the culpability of his past actions was too hard to live with. That being said, will Reiner Braun really die in Attack on Titan: Final Season?

Part 2 of Season 4 ended with Reiner Braun bringing the Marleyan army to Paradis for his most awaited rematch with Eren. Considering how strong Eren has grown, fighting him is nothing less than suicide. He almost got killed in their last encounter in Liberio, and Eren intends to finish him this time. The article will have major spoilers from the original manga, so read ahead accordingly.

Eren vs. Reiner Rematch in Marley

Reiner undoubtedly fought better than their last encounter in Liberio but ended up getting thrashed by Eren again. While Eren was occupied by Pieck’s anti-Titan artillery, Zeke turned Falco into a mindless titan. Totally rejecting the possibilities of a reunion of the Yeager brother, he allowed Falco to devour him bit by bit and inherit the Armored Titan. However, Porco came in his way and willingly gave his life to Falco, and Reiner had no other choice but to watch it before his own eyes. Adding salt to injury, Eren and Zeke eventually make contact. It gave Eren the powers of the Founding Titan, with which he unhardens all the Wall Titans, and since Armored Titan is covered with hardened skin, he crumbled into pieces.

What Happened to Reiner after the Marley War?

After the Marley War, Reiner wakes up by a kick from Annie. He was shocked to see his former comrade fighting alongside the remaining 104th training corps to stop Eren. Mass genocide of the entire world isn’t something both the parties can afford, so they join hands to stop the rampaging army of Colossal Titans. After much hardship and sacrifices, the team gets their hands on an Azumabito airship and flies to Eren’s location near Fort Salta. For the very first time, the world gets reunited irrespective of their races to fight a bigger threat, Eren Yeager.

No, Reiner Braun, also known as the Armored Titan, will not die in the Attack on Titan series. In his final stand against Eren Yeager’s Founding Titan, he will manage to stall the massive centipede from reuniting with Eren without getting himself killed. However, after Eren’s death, the world is freed from the curse of titans, and Reiner is no longer the Armored Titan anymore.

Reiner gets back the memories of his last conversation with Eren, and he laments for his friend’s fate and the immense guilt he shouldered to bring the world together again. This was a big moment for Reiner since he managed to stop Eren and save the world from the curse of titans. For the first time in his life, things went exactly as he planned, and he couldn’t help rejoicing the moment by greeting his mother.

Also Read: Will Hange Zoe Die in Attack on Titan? A Complete Analysis

Why Didn’t Ymir’s Curse Kill Him?

According to Ymir’s curse, all the titan shifters have a short lifespan of 13 years after inheriting the titan. Reiner was 12 when he inherited the Armored Titan, so 21-year-old Reiner only had a few more years to live. However, Eren’s death changed everything. The event wiped out the existence of Titans from the world, thereby turning the Eldians back to normal humans. Not only Reiner but the remaining warrior candidates like Annie, Pieck, and Falco were also freed from Ymir’s curse.

Reiner’s Future After the Battle of Heaven and Earth

Three years after the fateful showdown, the survivors were made the peace ambassadors of Paradis and the remnants of the outside world. Jean and Reiner were seen joking around on how he totally missed the chance to make a move on Historia. Meanwhile, Annie was more concerned about their odds of successfully negotiating with Paradis. Despite the bloodstained history that Paradis shares with the world, Armin was hopeful that their life story of Warriors and Survey Corps working together would inspire future generations. Thus, we can say that the heroes of the Battle of Haven and Earth made sure that the sacrifices of their comrades for the greater good didn’t go in vain. Even if it’s for a brief period, they eventually established a world where people are tolerant towards each other.