In Chapter 65, Momoshiki takes control over Boruto's body. Will Naruto kill his son before things go out of control? 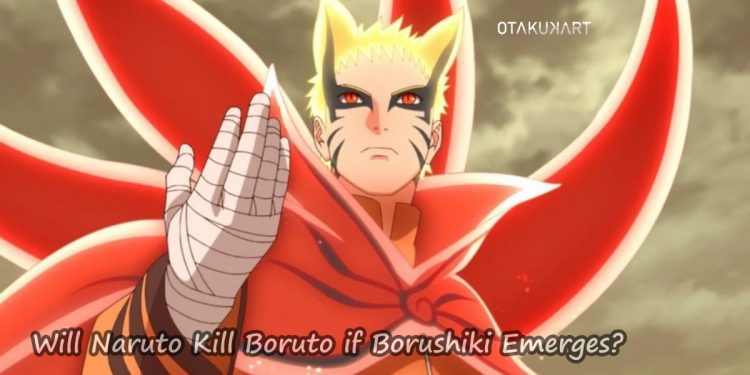 Ever since Momoshiki has planted his Karma on Boruto, he has turned into nothing less than a ticking time bomb that can explode anytime. Even Sasuke couldn’t stop Momoshiki-controlled Boruto from stabbing into his Rinnegan. Now that’s enough reason to treat Borushiki as an apocalypse-level thread. Naruto tried slowing down Boruto’s Otsutsukification using Byakugan suppressing pills, but the plan failed miserably as Borushiki reemerged in the recent chapters and tried to kill Naruto.

The leaders of the Shinobi nation have been concerned about the Borushiki problem for quite some time. In the last Five Kage Summit, Naruto assured Gaara that it’s his responsibility as the Hokage to take every necessary step to nullify the Borushiki problem. Does that include killing Boruto when he completely loses control? The article contains spoilers from Boruto manga, so read accordingly.

Boruto’s karma is like a double-edged sword. It surely gives him a massive boost in strength, stamina, and speed, but every time he resorts to that power, he goes one step towards losing his body to Momoshiki. Right now, Boruto is almost 80% Otsutsukified, and things will only worsen from here on. In the recent chapters, Momoshiki’s consciousness has already taken over Boruto. If it wasn’t for Kawaki’s intervention, we could have lost Naruto into the massive Rasengan that Borushiki directed towards him.

Once Momoshiki gets reincarnated in Boruto’s body, he will continue with his original motive. He will try to get his hands on the Chakra fruit by sacrificing Kawaki to the Ten-Tails. This will certainly bring back the horrors of the Fourth Great Shinobi World and can be far worse than that.

Can Boruto Regain His Consciousness?

The way Borushiki attacked Naruto without the slightest hesitation somewhat suggests that Boruto has completely lost control of his body. In the past years, we have witnessed similar situations where Jinchurikis like Gaara and Naruto had lost control over their tailed beast. However, I don’t think even the wood style can contain Momoshiki’s powers. Considering Momoshiki’s intense evil intent, I don’t think Boruto can ever get along with Momoshiki as Naruto and Gara did to the demons residing within them.

Rather, a good smack on Boruto’s head may bring back his consciousness temporarily. If you are searching for a permanent solution, everything depends on Boruto’s willpower to keep harnessing karma powers without losing control. In Chapter 65, Boruto did manage to pull that off for a while but couldn’t last long. If he recalls how he did that and mastered the technique, there’s a slim chance he may succeed.

No, Naruto can never kill Boruto with his own hands, even if he becomes a threat to the Shinobi World. His fatherly emotions will surely come in the way of his responsibilities as the Hokage. We know how much Naruto values the people he cares about. He kept on protecting Sasuke even when he was an international criminal and worked under Akatsuki. So, there’s no way Naruto can give up on his son that easily.

Even Sasuke is convinced that Naruto would hesitate to kill Boruto, so he confirms that he would kill Boruto if things go south. Moreover, Naruto without Kurama doesn’t stand a chance before a reincarnated Momoshiki. He claims that his Sage mode is sharper than ever, but let’s just admit that it’s simply not enough against an Otsutsuki level threat. So, I am more concerned about Naruto’s safety if the father and son face each other in a duel.

Furthermore, Naruto will fail to kill Boruto not just because of the plot but also due to the first scene of the series where Boruto is very much alive. He was seen fighting Kawaki, who claims Naruto to be dead already. Does that mean Kawaki is the threat we must concern about? That’s the topic of discussion for another article, so stay tuned to our site for the latest theories.