Nagato, better known as Pain, goes on a rampage in Konoha village. He wants to bring about peace in the shinobi world by showing them what war can do first. He plans to make others feel the same pain he felt when he lost his loved ones so that people finally realize the despair war breeds. 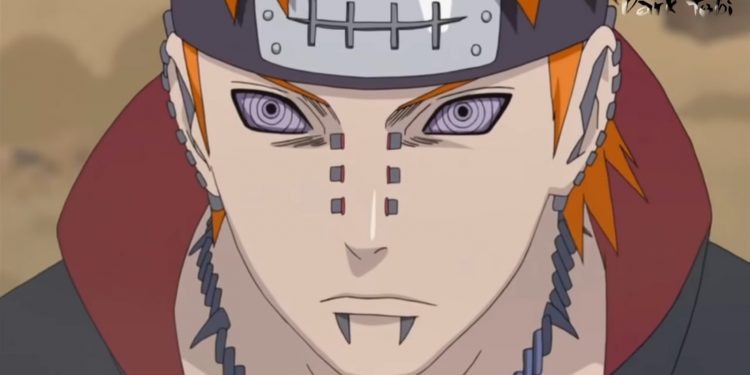 The Akatsuki clan was the clan of the most villainous and dangerously powerful shinobis in the Naruto universe. Masashi Kishimoto once described the group as a band of anti-heroes rather than just evil villains. He believed that their compelling and tragic pasts often made them do the things that they did. The tragic events in their lives gave them no choice but to just give up on this war-torn shinobi world and show humans their true value of nothingness.

Nagato, Yahiko, and Konan were the founding members of the clan. Nagato was deeply inspired to go on a path to forcibly bring about peace in the world because of Yahiko’s ideals and his parents’ untimely death.

Nagato, better known as Pain, was one of the strongest’ anti-hero’ characters Naruto ever came across in the shinobi world. Nagato, later calling himself Pain, was shown to be quite a normal kid but with very strong emotions and opinions about certain issues. He lost his parents early because of a deadly war, and that changed his life for the worse.

Nagato was born to his parents Fusō and Ise, in Amegakure. Madara Uchiha had secretly implanted his Rinnegan into Nagato without anyone knowing about it. After some time, Nagato and his parents had to take shelter in their home to avoid the fighting happening outside because of the second Shinobi world war.

But, one day, two Konoha shinobi broke into their home looking for food. Frightened, Nagato and his parents tried to sneak out without being noticed. However, they got discovered, and his parents were killed by the Shinobi, thinking that they were enemies. When the Konoha ninjas discovered that they were just civilians, they tried apologizing to Nagato but Nagato, overcome with emotion, used Madara’s Rinnegan to kill the ninjas to avenge his parents.

Nagato buried his parents and wandered around in search of food and shelter. He collapsed from malnutrition but was found by Konan and Yahiko (fellow orphans and products of war just like him), who helped him survive. Soon, their friendship blossomed, and they decided to eliminate war. However, they would need the training to fulfill their goal, which they got from Jiraiya, one of the three legendary ninjas in Konoha.

Nagato formed Akatsuki, with Yahiko as their leader, and Konan as well. They had the aim of bringing peace to the violent shinobi world. His friends were also fellow orphans. Their message gained popularity quite fast, and they amassed quite many followers. Even Jiraiya would sometimes hear of their exploits.

How the name “Pain” came to be:

Hanzo, the leader of Amegakure, felt threatened by the Akatsuki, so he devised a plan to kill them off. He was only able to kidnap Konan and make Yahiko kill himself to save him. Nagato’s legs were severely damaged as well.

But, after the death of Yahiko, Nagato changed his name to Pain and, with the help of Konan, began leading a reformed Akatsuki. The new Akatsuki would force the shinobi world to accept their idea of peace by any means possible. Pain knew that the world would not give up on their hate-filled ways, so he wanted them to know what it felt like to be a victim of war just like he was. He wanted the world to feel the same Pain that he felt.

Nagato was a shinobi of Amegakure and a descendant of the Uzumaki clan.

Pain was the strongest in Akatsuki, so the position of leader was well-deserved for him. He could single-handedly destroy the whole village of Konohagakure. He also defeated Hanzo later on and even Jiraiya; although Pain suspected that he would have been defeated if Jiraiya had recognized him. Being a descendant of the Uzumaki clan, his chakra reserves were astonishingly vast, so much so that he could perform various techniques at the same time. This is often attributed to his possession of the Rinnegan. His Rinnegan gave him access to all Six Path techniques, which were, the Deva Path, Animal Path, Preta Path, Human Path, Asura Path, and the Naraka path.

Although his legs were destroyed, he could shift between these chakra techniques seamlessly. With the outer path, a special technique, he could form “The Six Paths of Pain” by embedding black receivers resembling piercings on the dead, reviving them and controlling them like puppets to do anything he wanted them to. That’s how he still kept Yahiko the leader of the Akatsuki, he was controlling his corpse through this technique.

How did Pain die?

Pain with the Six Paths of Pain and Konan came to kill Naruto and destroy Konoha village to fulfill Akatsuki’s dream. All the Paths and Konan scatter to do their respective tasks. His Deva Path is found by Kakashi, who almost gets killed, but reinforcements arrive in time to help Kakashi. The copy ninja had already figured out his chakra recharge timings, but when he goes to attack the Deva Path, Pain uses Asura Path as a shield which allows the Deva Path to destroy everything in the area. Kakashi manages to subdue the Asura Path.

The Deva Path locates the Hokage and tells her to give up Naruto, she does not cooperate though. Although he learns that Naruto is at Mount Myōboku, he becomes frustrated with the Hokage and sees that a lot of Konoha ninjas have figured out his techniques. So he decides to destroy the village altogether. The Deva Path performs a large-scale Shira Tensei.

When the Hokage furiously confronts him about this, Asura Path moves to kill her but is instead killed by Naruto, who has appeared with his toad allies. Konan retreats to attend to Nagato, whose physical body has weakened. All the other paths surround Deva Path for it to recharge safely. The toads take on the animal Path while Naruto neutralizes the Preta Path using his Sage Mode. The Human Path is destroyed by Naruto’s Rasenshuriken, and the Animal Path is defeated by Spiralling serial spheres while it’s trapped within Gamabunta’s mouth.

However, the other Paths manage to trap Naruto, who can barely offer any resistance. Pain tells him about his life’s struggles and asks Naruto what he would’ve done differently to achieve peace. Naruto understands Nagato’s logic but rejects it in the end. His method to achieve peace would be to no longer continue the path of hatred followed by the previous shinobis. He also refuses to kill Nagato even though he is angry with him for killing Jiraiya.

Amazed by Naruto’s resolve, Nagato decides to bring back all the villagers he had killed. To show his faith in Naruto, Nagato uses the  Samsara of Heavenly Life Technique to revive everyone, but the technique depletes all his life force. Nagato finally ends his own life with a smile on his face.