Momoshiki is one of the strongest villains to grace the earth in the Boruto universe. He arrives on Earth with Kinshiki to punish Kaguya who has supposedly betrayed the Otsutsuki clan. The pair wish to plant a god tree on Earth and devour the chakra fruit as well consume the chakra from Naruto's nine-tailed beast Kurama. But he has to defeat the greatest shinobis in Konoha before he can cause any destruction. 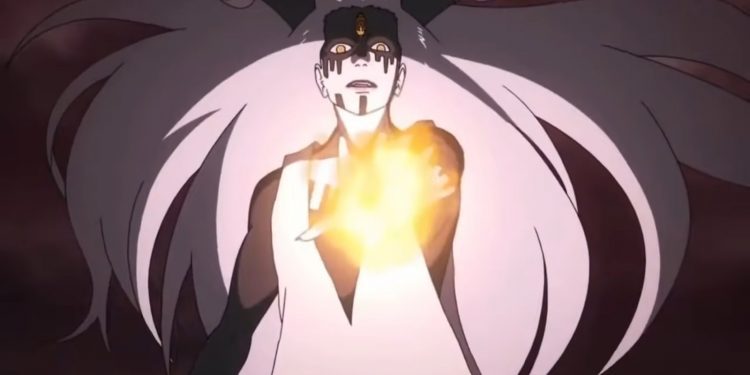 Kishimoto has given us many powerful villains in his popular Naruto series, and he is also going all out with the villains in the sequel series of Boruto. In Naruto, the fans got to see villains like Orochimaru, Madara, Obito, and all the other infamous Akatsuki members. They have several special abilities up their sleeves, along with a well-fleshed-out backstory that keeps the fans engaged in their character development.

In Boruto, all of the antagonists in the series are overpowered with God-like abilities, and some of them are actual Gods. Momoshiki is one of the first villains to be introduced in the anime series and has caused several fights to upset the peace of the hidden Leaf village.

Momoshiki is one of the strongest villains to exist in the series, and he makes his first appearance in episode 15 of the anime. He is a celestial being who comes to Earth with his pair Kinshiki in order to find and punish Kaguya for betraying the Otsutsuki clan. He learns about the immense chakra levels of the Nine-tailed beasts like Kurama on Earth and wants to consume all of that Chakra by himself.

The character first appears in the Boruto series during its Academy entrance arc. Momoshiki is seen eating a chakra fruit harvested from a God tree on an unknown planet that he destroyed. Kinshiki approaches him to inform him about an abnormality in the space curvature of Kaguya’s world. He noted that Kaguya had violated her clan’s laws by not reporting this. Momoshiki is very intrigued by the idea that lower life forms of the planet Earth may have overthrown her, which is why she could not report it. He also thinks she might have betrayed her clan to keep all the Chakra of the planet to herself.

Both Momoshiki and Kinshiki depart for Earth, interested to learn more about these inferior life forms, punishing Kaguya and consuming all the Chakra from the planet.

On the way to find Kaguya, the two encounter Sasuke as he was trying to get information about a threat greater than Kaguya. Kinshiki and Sasuke battle it out amidst an ongoing blizzard. Momoshiki gets even more interested in Earth’s lifeforms after seeing Sasuke’s Rinnegan. They plan to consume all the Chakra from Kurama, the nine-tailed beast living inside the current Hokage of the Hidden Leaf village, Naruto.

The two appeared in Konoha during the Chunin Exams and created massive chaos. Momoshiki kicked Naruto out of the Arena but then remained at the side. All the while, Kinshiki destroyed the Arena and attacked Sasuke and Sarada. Boruto sees Momoshiki here for the first time and becomes very frightened. He tried to use his Kote to attack the celestial being, but all his attacks are absorbed through Momoshiki’s Rinnegan.

Naruto is informed by Sasuke that Momoshiki and Kinshiki are bigger threats than Kaguya. Naruto asks the two monsters what they want to learn about their motives. Momoshiki explains that they came to complete the task that Kaguya had failed to do before, i.e., gather all of Kaguya’s scattered Chakra into a chakra fruit, and then he will eat it. By eating the chakra fruit, he will gain supernatural powers and eternal youth.

However, taking the nine-tailed beast was not easy for Momoshiki as he was faced with the combined forces of Naruto, Sasuke, and their children. Naruto and Sasuke come up with the idea of combining Kurama and Susanoo to fight against Momoshiki while the celestial being undermines their seemingly futile efforts.

To end the shinobi forces, Momoshiki creates a giant black ball, amplified with the powers he stole from Boruto, and launches it towards them. Naruto gets taken captive while Sasuke protects their children. Naruto is taken to another dimension. There, Momoshiki and Kinshiki start the process of extracting the nine-tailed beast’s Chakra from him. But, before they can take any more of his Chakra, Sasuke and Boruto arrive there with four other Kage to rescue Naruto.

Momoshiki fights with Sasuke while Kinshiki fights the other Kages. In a hurry to finish off all the interferers, Momoshiki transforms Kinshiki into chakra fruit and devours him. His body undergoes a drastic change after this. He eats Kinshiki as Chakra pills throughout the battle to refill his Chakra. Naruto gets briefly stuck between boulders, and Sasuke gets severely burnt. But the pair were able to weaken Momoshiki to a certain extent by their combined efforts.

But when Momoshiki imprisoned the other Kage with his Shadow Paralysis technique and was about to kill him,  Sasuke helps Boruto use his Rasengan to put an end to the threat.

Enraged at Boruto, Momoshiki again absorbed more chakra pills and increased his strength. Naruto lent his Chakra to Boruto to create a Parent-child Rasengan as the final attack while Sasuke distracted Momoshiki. Boruto ambushed him with a shadow clone to take out his Rinnegan and then attacked with the Rasengan, which collided with Momoshiki’s own Rasengan look-alike, destroying him for good.

However, Momoshiki’s spirit stayed intact for a good while. He noticed that Boruto could feel his presence as he had the blood of the Byakugan users from his mother, Hinata. He approached Boruto and told him that he could see his destiny even though Boruto himself didn’t know of his destiny. Momoshiki warns him that someday his blue eyes will take everything from him, and he will no longer remain the same after defeating a god. He says that humans who have defeated a god can no longer remain normal. Momoshiki disappears after telling him to continue down his own path. Boruto attains a mark on his right palm after this.

Momoshiki may someday resurrect himself from Boruto, but that is not clear yet.