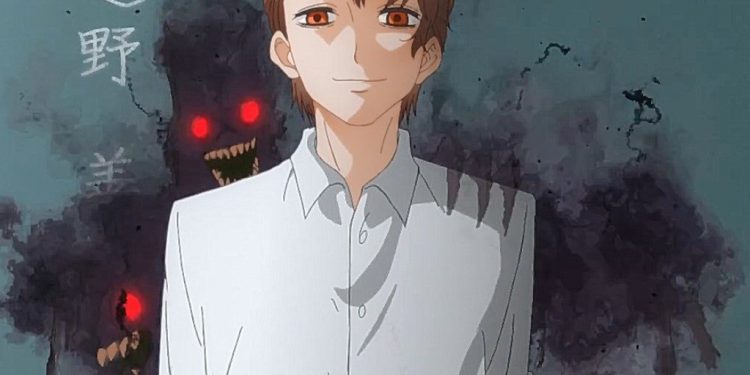 The mystery behind evil spirits continues in Mieruko Chan Episode 11 with Zen meeting with a lady that made food for him. The lady wonders why there are many crows around Zen’s apartment, but Zen chases them by winking at them. Zen thanks the lady for giving him food, but she notices that his hand is bleeding. He told her that he had broken the glass that hurt his hand. In Mieruko Chan’s latest episode, Zen enters the house, throws that food away, and cleans the blood on his hand. The crows notice that Zen is coming out and see something around him.

Miko and Hanna attend the sports period, and Hanna gets worried about lunchtime. Miko reminds her that they are in the second period. Hanna realizes that she has only eaten breakfast since morning and needs a solid meal. The teacher tells the two to do one more lap, and Hanna thinks she will lose her precious calories. Miko heard a ghost saying that they were running slowly. That ghost finished more than five laps before Miko and Hanna finished the first lap. Miko slows down since that ghost distracts her.

Hanna wonders why Miko slows down, and Miko replies that she wants to be on the same level as her. Later the students return to the class and attend English period. The giant lady ghost reads a book with Miko, and she gets annoyed every time that gosht looks at her. Zen tells the students to stop reading, and he explains the story. But Morion and her friends continue to tease him since they think he can date them. Morion thinks that Zen is Chie’s type. The giant ghost tried to talk with the girls, but they couldn’t hear it.

The ghost tells the girls to stop looking at Zen, but only Miko hears that. Miko kept her cool like nothing was happening. Zen asks Suzuki to read the book, and Morion reminds him that they don’t have a student named Suzuki. Miko realizes that the giant lady ghost troubling her is the one from the park and wonders why it has entered the class. Zen took the roll call and asked Ogawa to read the book. Morion and the other students think Zen is cheating since he uses the list to call out the students.

Miko realizes that if she doesn’t look at Zen, the ghost won’t bother her since it is near the girls looking at Zen. Zen walked with the same wolf ghost that Miko saw the first day he arrived. Miko realizes that the number of ghosts is increasing, and even the scariest ghost has entered the class. The giant ghost enters Zen’s body, and Miko wonders what happened. She realizes that she has met someone like Zen, who ghosts can host their bodies.

Miko wonders if she could communicate with the Axe Monster to help free Zen. She knows that the Axe Monster uses Axe to take the ghost that possesses humans and swallow them. But she realizes that it will be stupid since no ghost believes humans can talk with them. Zen came near Miko and told her that it was her turn to read. Miko read the book, and the ghosts gather near her as she read. But she was shaking since she was reading about the fierce old hag that walked with a torch at night.

Mieruko Chan Episode 11will be released on 12 December 2021. Zen realizes that Miko skipped her line, reading about something else. But Hanna saves her when her bell growls and tells Zen that she is hungry. The students laughed at Hanna that she was hungry in the third period and wondered how she would keep up. Later Hanna enjoys eating a hot dog, and Miko watches her thinking about the incidents. Let’s look at Mieruko Chan Episode 11 official details.

Also Read: Will Tezuko Rescue The Resistance Organization In Episode 11 of AMAIM Warrior at the Borderline?.