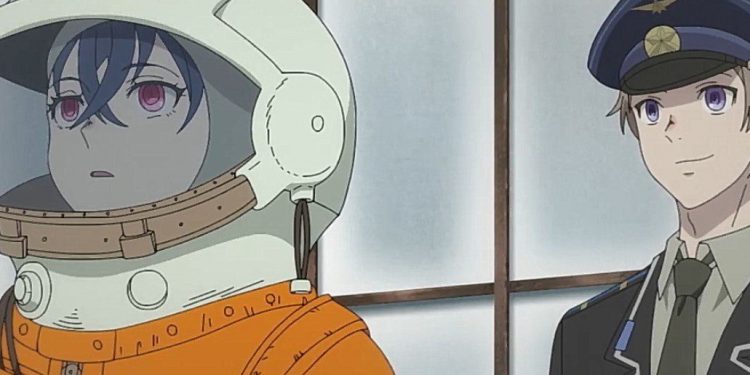 Irina thought it was happening for real since she had never watched her movie in her life. Lev told her that it was not real; it was a movie, and they could watch it. The two watched the movies, and Irana liked it since it was her dream to go to the moon. But she was scared when the first attempt to the moon failed and felt sorry for those guys playing that scene, thinking that he was hurt for real. The second attempt was successful, and Iran got excited while clapping hands.

The old geezer noticed that she was standing before him and told her to sit down. The movie ended and the American guy returns from the moon. Lev and Irina decided to have dinner. Irina told him not to worry about going to the hotel since Anya had repaired dinner for them and packed it. She told him that it was dinner for two, and Lev said it was a night picnic and decided to find a spot where they could relax.

Previously on Tsuki to Laika to Nosferatu Episode 10

Lev and Irina find a cool place and enjoy eating that dinner together. He wonders if she is enjoying it, and she says yes since Anya told her that it is food for celebrations in the UZSR. Irina wishes that Lev would be picked as the first cosmonaut. Lev told her if that didn’t happen, she could suck his blood and turn him into a mummy. Irina talks about the aurora she saw from space. She realizes that she had a wonderful experience during her trip to the moon. But she failed a couple of times and succeeded on the second attempt.

Lev realizes that Irina survived after sucking his blood the other day since the doctors failed to treat her. He realizes that he wants to feel that once more before leaving for the moon. Lev asks Irina to go ahead after showing her his neck, but Irina hesitates. He told her that it was not weird, and Irina tried to suck his blood from his neck. But she stopped before her fangs touched his neck, and Lev asked her what was wrong.

Irina reminds Lev that the bus has arrived, and Lev feels disappointed since the bus ruined the moment. He realizes that if Irina continues, the bus driver would have wondered what kind of kiss one has to bite the neck. Irina asks him if he wants her to be seen with him. Lev grabs her hands and pulls her back since she is about to leave. He told her that she had done nothing wrong and he didn’t care about what people will say. Lev hugs her and asks her to say something.

Tsuki to Laika to Nosferatu Episode 11 will be released on 13 December 2021. Irina says his name and comforts her, but she decides not to say it now since she will say it when he returns. Irina wishes Lev his best and tells him not to worry about her. Lev and other cosmonauts get ready for the trip to the moon, and the higher-ups wish them safe travel. Irina met with Anya and walked together, realizing that the time had come. Let’s look at Tsuki to Laika to Nosferatu Episode 11 official details.

Also Read: Will Senju Save Takemichi from Mikey In Chapter 235 of Tokyo Revengers?.