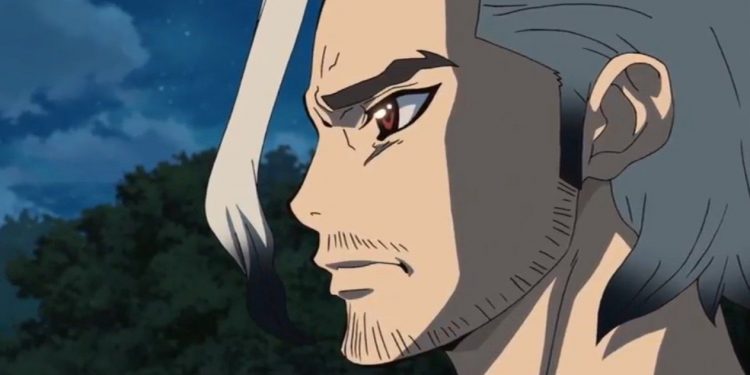 Are you trying to find out the answer to the question, will Byakuya Ishigami die in Dr. Stone?’ If yes, then you are in the right place. This article will help you to know about him and his death if it has occurred. So stay here till the end of the article so that you will get the answer.

Senku Ishigami was adopted by Byakuya Ishigami. When the mass-petrification on Earth’s crust happened, he was an astronaut aboard the International Space Station in space. A great guy like Senku had a father like Byakuya. He always trust his son no matter what the circumstances he faced, he knew that If Senku was here then it would not be impossible.

Byakuya was endearing, and his faith in the existence of play to keep mankind alive endeared him to everybody who encountered him. He became a true leader as a result of his power of personality, motivating those he met and being influenced by them. At the end of the day, Byakuya just seems to encapsulate the positive features of human civilization: honor, optimism, empathy, knowledge, flexibility, and boldness.

Dr. STONE reboot: Byakuya is a spin-off manga starring Byakuya. On October 28th, it debuted with the original show in Shonen Jump. Byakuya reappears in the concluding track, clutching Senku’s finger and Senku having a dream about him after his petrification.

Yes, Byakuya Ishigami will die in Dr. Stone. He gradually grew so aged that he passed away in a stream one midnight after several years. Byakuya was aware that he was approaching the end of his life, but he was relieved to see the sky. Ishigami passed quietly, his final words and was of Senku, as he gazed at the sky reflected in the water. Byakuya had died a long time ago before Senku got unpetrified. Senku discovered a time capsule disc buried by Byakuya following studying the Hundred Stories in the “Village Origins” storyline. His death looks more like a normal human being but for the people of Ishigami Village, his death was heroic.

Byakuya has a buzz-cut beard and mustache as a middle-aged guy with hair that grows just over the base of his throat. His eyes are chocolaty in color, and his hair is light with black ends, identical to Senku’s. He embraced the use of his former astronaut outfit as a shroud throughout his tenure on Treasure Island.

Byakuya was a loving and supportive dad who adored his kid Senku. He even sold his automobile to help Senku get the supplies he required to keep his interest in science. He was a loving individual who was prepared to put in the effort necessary to ensure Senku’s bright future. Byakuya was a kind, humorous, and funny guy who, no matter the consequences, usually managed to find a way to entertain himself and keep the place lighthearted. He was a fervent believer in the importance of laughter and humor to the human future. He was a brave guy who did everything he could to assist others, often trying to find a way to put his abilities and knowledge to good use.

Byakuya’s sense of humor could be a little gloomy at times, but he was always able to put a positive spin on what could otherwise be a sad situation. Most individuals could sustain the death of their colleagues, child, and universe, but his strong willpower helped him to do so. He instilled in his child an unshakeable resolve, as well as a disregard for formality and etiquette, choosing to be genuine and sincere yet never forgetting to be good toward others.

Where can you watch Dr. Stone?

After knowing about a father like him, who always gave his best to Senku so that he can live a peaceful life. Byakuya Ishigami always believes that his son is a genius even if he is just a high school student. Everyone wants a father like him so if you guys are interested to watch the series of Dr. Stone then do not worry I will give you some websites where you can watch both seasons. Just you have to subscribe so that you can watch them and other anime series without any interruptions. Crunchyroll, Hulu. FUNimation.

Also Read: Will Kakuzu Die in Naruto? Everything You Should Know

How Many Chapters Does Naruto Manga Have?

Will Kaori die in Your Lie In April? Unveiling a Beautiful Tragedy