Will Annie Leonhard wake up from her seemingly eternal sleep within the crystal? Will she ever see her father again? 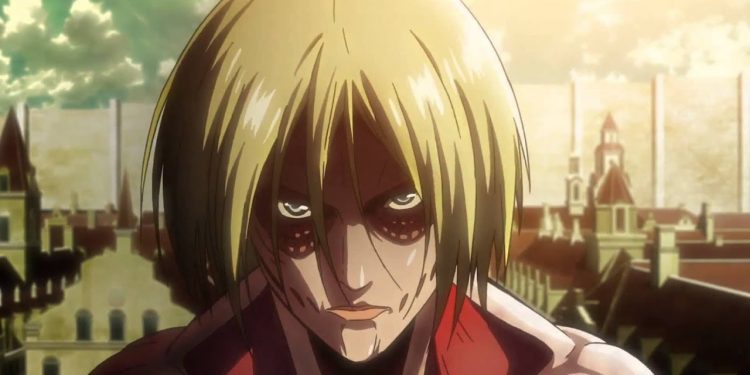 Will Annie Leonhart wake up in Attack on Titan Final Season?

Throughout the last two seasons of Attack on Titan, Annie Leonhart was seen imprisoned into the crystal she created after getting overpowered by Eren. I expected her to be awake after the 4-year-time skip, but she remained motionless inside her crystal cascade. However, the way she got considerable watch time in between the arcs hinted that Annie would wake up from her seemingly eternal sleep.

Meanwhile, Armin’s feelings for Annie kept on growing over the years. Many of the Survey Corps members believe that Armin is gradually manifesting the feeling that Bertolt had for Annie. Despite rejecting the hypothesis completely, Armin kept spending hours beside her, sharing everything that was happening around them. Deep down, he profoundly believes that Annie is still hearing him from the crystal. The article comprises major spoilers from the manga, so read accordingly.

How did Annie get into the Crystal?

Annie Leonhart was among the Warrior candidates who infiltrated Paradis to abduct the Founding Titan. She was the first one who got uncovered by the Survey Corps, thanks to Armin’s genius brain. Totally ignoring the instructions to surrender, she transformed into her titan form, followed by a gruesome battle with Eren Yeager. Unlike their previous battle, Eren burst out with rage and overpowered her. Seeing no other way of survival, she seals herself up within the titan crystal.

Will Annie Wake Up from Her Eternal Sleep?

Yes, Annie will wake up from her seemingly eternal sleep after Eren finally activates Rumbling. In the original manga, Eren and Zeke finally came in contact, thereby resulting in the Rumbling that everyone feared. With a single command, Eren freed all the hardened titans across the world. Thousands of Colossal Titans emerged from the hardened Walls, and Annie was no exception. The crystal around her gradually crumbled, and she finally woke up from her sleep.

Thanks to Armin’s one-sided conversations, she had a good idea of what was happening in Paradis. She immediately joined Mikasa, Falco, Gabi, and the surviving members of the 104th training corps. Captain Magath and Hange joined forces and came up with a plan to stop Eren at any cost. We must remember that everything she did so far was to see her father again. Never for once did she think about the greater good. You see, everything is about perspective. For example, the sinking of a ship is nothing less than a miracle for the fishes in it. Similarly, Eren’s activating Rumbling gave her a second chance to reunite with her father.

Will Annie Die in the End?

No, Annie Leonhart, also known as the Female Titan, will not die in the Attack on Titan series. After the fall of Liberio, she was convinced about her father’s death, so she stayed back on the ship with Falco and Gabi. However, Falco insisted on transforming into his new flying Beast Titan and rescuing their friends. He flew them to Fort Salta, and they arrived just in time to save Mikasa, Jean, and Connie from getting devoured by an army of titans.

Later, she was overjoyed after hearing from Karina Braun that her father was still alive. To Annie’s horror, her father was transformed into a titan along with all other Eldians right before her eyes. Thankfully, Annie’s nightmare ended shortly with Eren’s death, and the transformed Eldians went back to normal. We finally witnessed the heartwarming reunion of Annie and her father after almost a decade. I am sure she must have had a hard time explaining why she still looks like a teenager.

What Happens to Annie After the Battle of Heaven and Earth?

It is expected that Annie must have settled down with his father somewhere between Fort Salva and Marley to live the life she craved for. Three years after Eren’s Death, the survivors of the Battle of Heaven and Earth were made the peace ambassadors of Paradis and the remnants of the outside world. It was nostalgic to see Annie, Armin, Jean, and Reiner having a happy time, just like the old days. Annie was more concerned about negotiating with the Yeagerists, but Armin assured her that the story of Warriors and Survey Corps working together would change their hearts.