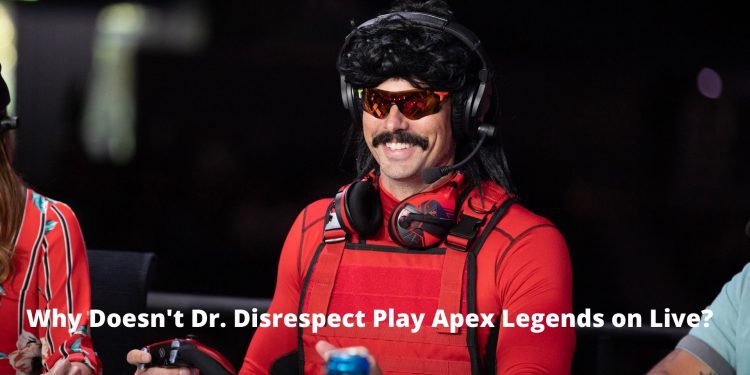 Why Doesn’t Dr. Disrespect Play Apex Legends on Live? Dr. Disrespect is well known for his gaming career. He participated in esports and he is a streamer on youtube with millions of subscribers as well. Also, he used to play Apex Legends a lot. A few months ago, he used to stream this game daily so what happened now. Earlier when he said that mobile games are nothing in front of PC ones then a famous streamer defeated him every time they started a match on mobile. However, that was just for entertainment but this time we have more from the streamer’s end.

Well, he just yelled in his live stream about the game he used to play for years. He is in the gaming industry for the past 10 years, playing PUBG PC, Call of Duty, etc and for a few years, he got some part of his fame from Apex Legends too. But, What is the reason for yelling on Live Stream? or Why will Dr. Disrespect not play Apex Legends? Well, Apex Legends is back with new and exciting updates so read on to know the reason for not playing Apex Legends by Dr. Disrespect.

Who is Dr. Disrespect?

Many PC gamers out there must be knowing Dr. Disrespect because of his gaming career but do you know how he reached that level of success that he has now? Well, this section is all about his career and personal life. Dr. Dirsrespect is an American Gamer who generally plays live on youtube. He has a fan base of more than 3.6 million, all these people are his subscribers on youtube.

So, his other social media has more than this. Herschel Beahm IV is his real name but just like other gamers, he also took a gaming name for him that is Dr. Disrespect. Is there any other name? Yes, you can find him on the internet or youtube just by typing The Doc or the Two-Time. But, his most famous name is Dr. Disrespect. However, he isn’t rude but a straightforward man.

If he doesn’t like something, he will directly tell you on your face and that’s the attitude other gamers love. Also, he is funny as he entertains his subscribers while streaming. People on his comment box never get tired of appreciating him. One more famous news about him that went viral two years ago was that he was banned from Twitch. The reason is unknown so there’s information from both ends that why did Twitch ban Dr. Disrespect. Furthermore, he was born on 10th March 1982 in America.

He completed his studies at California State Polytechnic University that is in Pomona. This guy is in the gaming world for 10 years so yes, he is an experienced gamer. Also, he has more than 256 million views on youtube that indicates that how fine a player he is. Well, he has a daughter too but he has some problems in the relationship with his wife. Still, they live together.

Also Read: Dr. Disrespect Net Worth: How Rich Is The Streamer?

Dr. Disrespect was live a few days ago and he was playing as usual. And, his subscribers asked him why doesn’t Dr. Disrespect play Apex Legend? Then he replied that he loves the game and there is no doubt. He kept on praising the game and the new map that was launched in the new update. But, later he clearly mentioned that he can’t play the game as his friends don’t prefer playing Apex Legends. Playing with randoms is fun but there is a different kind of satisfaction with friends, right?

Further, as we know that he generally plays with TimTheTatman and Zlaner. Both of his teammates don’t want to play and Zlaner is a Call of Duty guy so it becomes difficult for The Doc. Furthermore, he said that other streamers on youtube also don’t play this game. Noone plays Apex Legend so because of these circumstances even if he likes the game, can’t play it.