Mushoku Tensei: Isekai Ittara Honki Dasu proves to be one of the best anime of 2021. 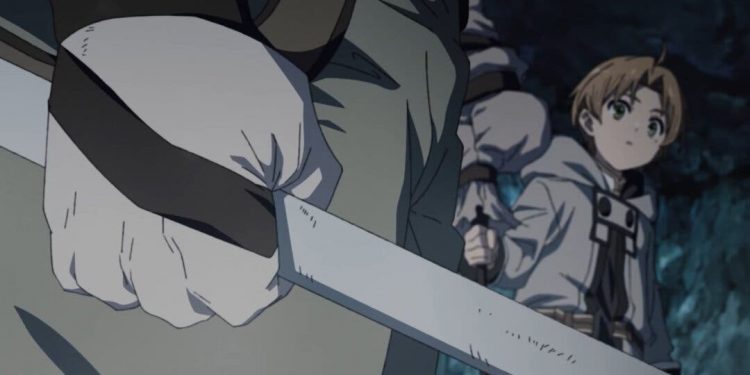 The Dragon God and Rudeus fought in the second part, but why didn’t the Dragon God kill Rudeus? Interesting question, right? There must be a reason. And you guys want to know what is the exact reason behind this. If you are interested to know about that, then read through this piece. So stay here to know more about their fight and what the result was.

Mushoku Tensei: Jobless Reincarnation is one of the top-grossing anime series of 2021. This is a story of a man who was 34 years old in his previous life when he died. He never knew that God would give him another chance to live a normal life. After his death, he got reincarnated in another world but with his past life’s memories.

Mushoku Tensei: Isekai Ittara Honki Dasu is an original work of Rifujin na Magonote and picturized by Shirotaka. The author does not like to show his face, so whenever he goes for an interview, he dons a helmet to hide his face. But after the popularity of the anime series, maybe he will reveal his face. Mushoku Tensei has a total of 23 episodes in season 1, so if you are also looking for information about the streaming platforms. Then, you to read the full article because we will also share details of some streaming platforms.

The Dragon God, Orsted and Rudeus, are some of the main attractions of Mushoku Tensei: Isekai Ittara Honki Dasu. In this anime, they are opponents and do not like to cross their paths because of Orsted’s intense hatred against Man-God, Hitogami. Rudeus Greyrat is the only one who can see Hitogami in his dreams.

In episode 20 of season 1 ‘Turning Point 2’, where Orsted and Nanahoshi Shizuka from one side and Rudeus, Eris, and Ruijerd from the other side were crossing their path the first time. After that, Ruijerd and Eris were feeling fear of death, but Rudeus felt nothing after looking into Orsted’s eyes. After a conversation between Orsted and Rudeus, Dragon God understood that why he was not getting afraid of death. He asked Rudeus about Hitogami, and after hearing, he knew him, Dragon God, Orsted goes straight to kill him.

Here, we see an intense fight that occurred between Orsted and Rudeus. Against Dragon God, he had no chance to win. Ruijerd and Eris tried their best to stop Orsted, but they were easily beaten by him. Rudeus was not able to understand why the Dragon God was trying to kill him. Orsted gave him a warning because Rudeus knew about Man-God, and nearly killed him by piercing his hand into his heart. Eris was crying because she loved Rudeus, and she did not want him to die.

Nanahoshi Shizuka said Orsted to save him from death because she understood the fact that he is also the one who is come from Japan, where she belongs. Nanahoshi thought that he must know something about why they both are the only ones who came here from Japan. After hearing from her, Dragon God Orsted healed all his critical injuries which were given by him. Along with Rudeus, Orsted also healed Eris and Ruijerd. When Rudeus regains consciousness, he asks Eris who saved him. She told him a girl with him (Nanahoshi Shizuka) asked Orsted to save him from death. Rudeus never knew that the man who was trying to kill him would try to save him.

Where you can watch Mushoku Tensei: Jobless Reincarnation?

A battle between protagonist and antagonist makes everyone’s excited. And we can only assume that you guys have also been hyped up to watch what happens further into the series. IF you would like to watch Mushoku Tensei: Jobless Reincarnation, head over to Hulu, FUNimation, and Crunchyroll, where one may have to subscribe to the platform. Elsewhere, in Southeast Asian countries, one can watch Mushoku Tensei: Jobless Reincarnation on Muse Asia YouTube Channel for free.