Who will win the Tengun Uzui vs Gyutaro fight in Entertainment District arc? Will Sound Hashira Tengen Uzui die? 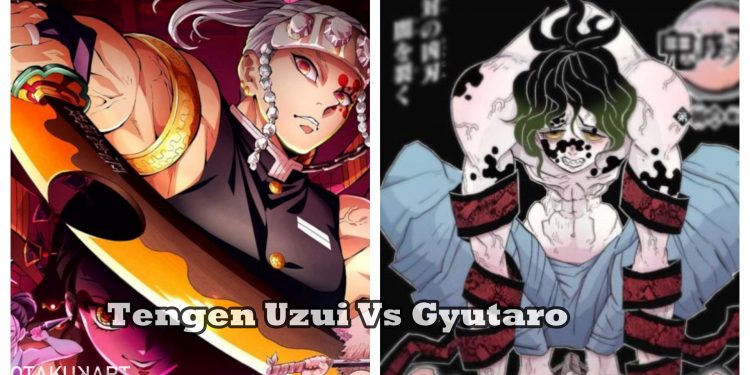 The Entertainment District arc is all about how Tengen Uzui wins all our hearts despite being the heartless tyrant in the beginning. He initially infiltrated the Entertainment district to search for his three wives who were spying in that region. However, their main mission was to uncover the demons hiding behind the glamour of the Entertainment District. He eventually came across an Upper Moon demon disguised as a beautiful woman, Daki. Little did he know that the main miscreant of the city is Daki’s elder brother Gyutaro, who is far stronger than her. The following Gyutaro vs. Tengen Uzui fight had ever-lasting effects on our flamboyant Sound Hashira.

Gyutaro was a demon born from hatred, misery, and every other awful human emotion you can think of. He killed humans like insects, and not even the likes of Hashiras were spared. He bluntly stated that he had devoured 15 Hashiras in his life as a demon, and his sister has devoured 7 more of them. Now that’s some scary facts that can shake even the strongest demon slayer. Here’s how the fight between Tengen Uzui and Gyutaro went in the Demon Slayer series. The article will be filled with spoilers from the manga, so read accordingly.

Tengen may seem like a heartless person, but he jumped into the fight when he sensed that Tanjiro, Inosuke, and Zenitsu were fighting the Upper Moon demon all by themselves. He made a flashy entry and sliced off Daki’s head as Asian chefs do to their fresh Sasami. However, it turns out that Daki isn’t the threat that he should be worried about. Rather, it was his brother, Gyutaro, who had been monitoring the fight all along from the dark.

Gyutaro kick-started the fight by boomeranging his deadly pair of sickles in every direction till it destroyed the entire area. Seconds later, Tengen revealed that he has three wives, thereby making Gyutaro even more furious. He immediately unleashed his Blood Demon Art of Flying Blood Sickles. Not only can these sickles move according to Gyutaro’s will, but they are also dipped in poison, which should kill any ordinary human within seconds. Thanks to Tengen’s shinobi background, he is resistant to any sort of poison, at least that’s what he claimed.

No matter how many times Tengen denied it, the poison started affecting him, and he got slower and slower. Gyutaro targeted Tanjiro as easy prey, but Tengen stood in his way and kept the demon occupied with his Sound Breathing Sixth Form. However, the tables turned when Tengen’s shinobi wives attacked Gyutaro with kunai knives dipped in refined Wisteria extract. Even with one of his legs lost, Gyutaro was nothing less dangerous (if not more). He took down Inosuke, Zenitsu, Tanjiro, and Tengen within an instant like a wounded wolf’s final attack.

How Did Gyutaro and Daki Die?

You will be surprised to know that Tengen Uzui wasn’t the one to kill Gyutaro and Daki. Surely he played an integral role in the fight, but the killing blow was made by Tanjiro, Inosuke, and Zenitsu. Just when everything was lost, Tanjiro startled him with an unpredictable headbutt, followed by Tengen’s intervention as a decoy. Gyutaro’s sickle was struck in Tanjiro’s jaws when he beheaded the demon with a clean cut. Meanwhile, Inosuke and Zenitsu rose from the debris and went after Daki. She wasn’t much of a threat, and they chopped her head off with a perfectly coordinated attack.

Aftermath of the Fight

Tengen Uzui was seriously injured and had almost zero hopes of survival. Thanks to Nezuko’s anti-demon flames that neutralized all the poison from his body. However, Tengen was in no condition to continue his job as a Hashira. He had already lost an eye and an arm; thus, fighting another demon in such a condition would surely kill him. With no other option left, he retired from his position with the firm conviction that Tanjiro, Inosuke, and Zenitsu would surpass him someday.

The Hero Party Learns The Mystery Behind Cave of Trials In Dragon Quest: The Adventure of Dai Episode 63