Delta makes her first appearance in the 157th episode. By the 198th episode, Delta was already dueling with Naruto after leaving a brilliant impression. Kishimoto made a promising character out of Delta. Boruto fans would definitely agree when I say that Delta has been one of the most entertaining personalities in the series by far. She displays tremendous strength and amazing abilities. So, who is Delta? If that’s what you are wondering, then Delta from the Boruto series is an antagonist who belongs to the Kara Organization. She is destructive and chaotic, which became a major obstacle for Naruto too.

Delta was created by Amado. Her entire body is modified for combat. In short, Delta is a killer cyborg that poses a huge threat. Given her stats, Delta is very powerful, if not the most powerful. She is very loyal to Kara and even becomes a member of the inner circle. Delta joined the organization after the Fourth Great Ninja War. Sometime after joining, she went in search of possible candidates for Jigen’s vessel. In her search, she meets Kawaki. After Kawaki joins Kara, Delta would often beat and abuse him.

Delta’s personality is not the best, I’ll admit. But she makes Boruto fun to watch. Ever since the beginning of the series, fans have loved her. Here is everything you need to know about Delta from the Boruto series. Many fans of Boruto love Delta. Let’s take a closer look at this character to understand who she really is!

Delta is widely appreciated for her appearance. She is very conscious of it herself too. At first glance, we can tell in a glance that Mikio Ikemoto, illustrator of the Boruto manga wanted to make her very pretty. Of course, he succeeded as Delta simps have emerged ever since her first appearance.

Delta has blonde hair. Before her animation, many fans thought that she might have orange hair or that she might be a brunette. She wears yellow eyeshadow along with yellow lipstick to complete her look. She also has a tattoo on her forehead that says “I” as in the Roman numeral 1. This tattoo was colored green in the manga but in the anime, it is yellow. 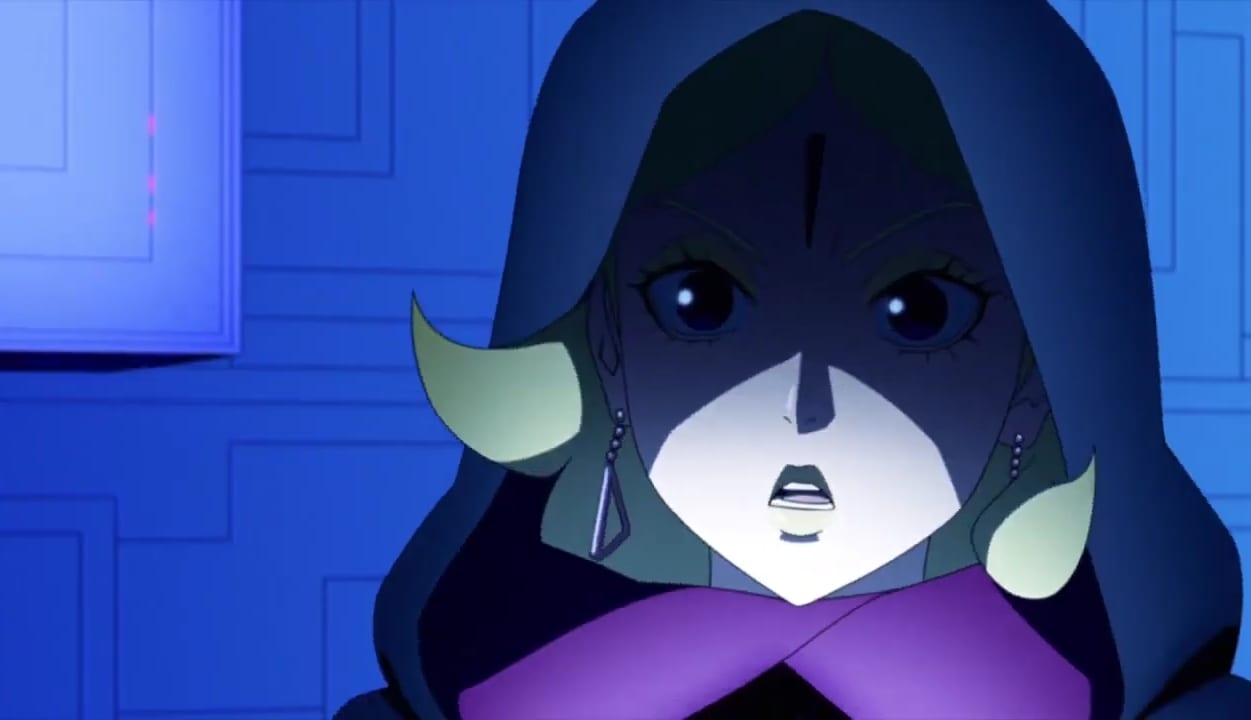 Delta’s reaction when Kashin Koji reports that the vessel is lost.

Her hair is flowy and long. Delta’s eye color is purple. She wears a turquoise outfit underneath a black cloak. To match her complete look, she paints her nails yellow.

Delta carries a stern look like she is always drenched in anger. For some reason, Delta has been given a high attachment to yellow in her looks. The attachment goes to an extent of even portraying her eyebrows yellow.

Overall, Delta from the Boruto series is a gorgeous character and exhibits a very powerful aura. She looks fearless, confident, and absolutely stunning.

Despite being a cyborg, Delta is very naive. She has anger issues that make her go violent under circumstances that even slightly tick her off. However, she has proven her loyalty to Kara. Like many villains, Delta is sadistic and ruthless towards her enemies. An instance of this trait is seen when she reminds Kawaki of how she beat him up when he was in Kara. She does not fret before taking someone hostage during combat. When things don’t go her way, it highly angers her. Delta depicts a high superiority complex which leads her to get violent when proven wrong. She also shows signs of being a sore loser and cannot stand the thought of not being victorious. It is a bit funny to imagine the amount of anger she carries despite being a cyborg!

Delta’s hot-headed personality might be her biggest weakness. She would rush into things instead of strategically planning through them. However, her rage can also be destructive.

One of her most villainous traits is her absolute heartlessness. She wouldn’t stand back from killing innocents to achieve her goals. What’s worse is she feels angrier that her plans of killing innocents are ruined. She has no empathy or feeling of remorse which makes her a typical yet highly dangerous villain.

Also Read: How Old is Kakashi Hatake in Boruto? – New Powers and Fights

Being a member of Kara’s inner circle, Delta has monstrous abilities. She threatens Kawasaki with her mere appearance. In episode 198, she is seen fighting on par with Naruto. Although Naruto was holding back throughout the fight, it is an undeniable fact that Delta had commendable counterattacks. 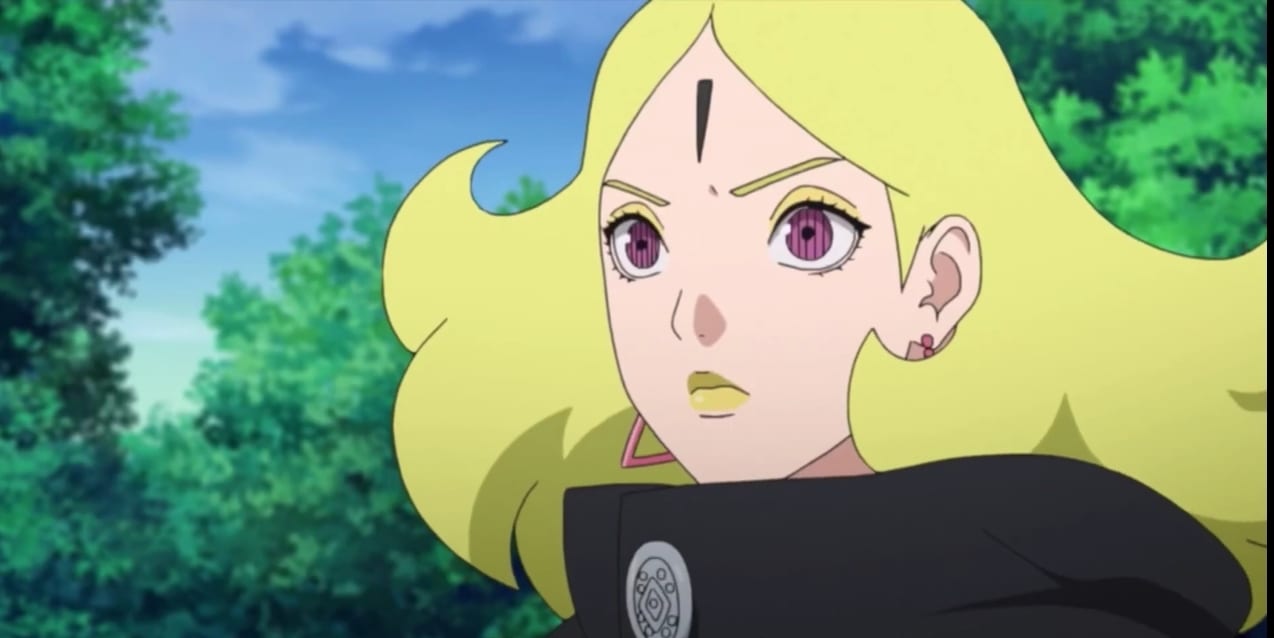 She uses Genjutsu Communication as her Jutsu. The ability allows her to create projections that can visually alter her surroundings. It comes useful for communicating through long distances.

Her main tools of choice are the absorbing eye, Shinobi ware, space-time gate, and a spy drone.

Delta’s absorbing eyes are connected to the spy drone. These are modified eyes that allow her to release ninjutsu. They can also detect jutsu within their range. The beams emitted from her eyes can counteract regenerative properties.

Delta is equipped with high-quality ninja tools, called shinobi ware. These tools are implanted into her to give her higher combat abilities.

The space-time gate helps Delta to travel to and from the Kara hideout. Delta’s last tool is the spy drone. The spy drone holds an important role. It can store Delta’s consciousness. The drone is stationed on her back mostly but it can also be considered remotely. After Delta’s defeat in the hands of Naruto, her consciousness is transferred to a new body using the drone.

Since Delta was built for combat, she is very skilled in Taijutsu. She shows a refined ability in martial arts that also somewhat fazes Naruto too.

Delta could modify her body as per her requirement during battles. The most prominent body modification she exhibits is the modification of her legs to form rockets. On a lower level, she can also modify them to give her higher speed. She further modifies her legs into sword-like objects. Moreover, her strength increases due to her body modification ability too, and can pierce her nails through the barks of a tree.

Delta played the role of a great antagonist while she lasted. In the end, she is incapacitated by Amado using a stop command. Whether she will return in the future is unknown. But, as of now, there has been no sign of her revival.

You can stream the series on Hulu or read its manga on Viz Media.