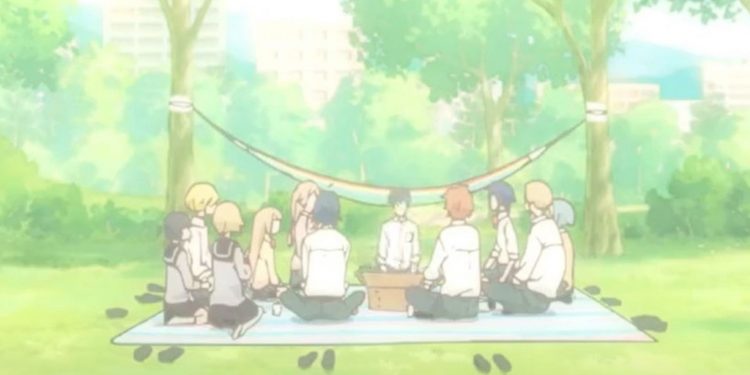 Tanaka is such a person who will do anything to not do anything at all! Tanaka will also not put any effort into those emotions, which will consume most of his energy. Tanaka-kun is the main protagonist of both the Manga and the anime series. Unlike any other protagonist who is shown as ‘brave and active and powerful,’ Tanaka, instead, would love to be a side character in his own life story! As much as a bluff it may sound, Tanaka is serious when he says so. So, with who exactly does Tanaka end up with, in ‘Tanaka-kun Is Always Listless’? Tanaka never intended to love or be in a relationship to be direct with you. Why? Because Tanaka is a listless person! As for if there are any love interests, let’s find out that in the later sections.

Tanaka-kun is always listless, also known as Tanka-kun wa Itsumo Kedaruge, which is a manga-based anime. The manga series is written and illustrated by Nozomi Uda, where the Manga was originally published by Square Enix, and its magazine Gangan online has serialized it since April 2014. The Manga series received an anime adaptation in the spring of 2016. It currently has up to 9 volumes, containing nine or more chapters each. The anime series, on the other hand, is written by Akemi Omode, directed by Shinya Kawatsura, while the character design is done by Haruko Iizuka.

Tanaka-kun wa Itsumo Kedaruge is a Japanese comedy genre, where the importance of friendship is featured with a great set-up. The series is about a High School boy who does not want to tire himself out more but ends up being tired even more. He may seem unreliable at first, but Tanaka is the one who makes his friends know what they are capable of. Sometimes, he even degrades himself while making the other person know their importance. All in all, Tanaka-kun is a great series for everyone who needs some time off from their busy schedule.

Are you one of those who is listless and do not want to tire yourself out too much? Do you think of shortcuts to complete your work but end up doing it again ‘normally?’ Any student or any person can relate to Tanaka in this context. There are days when we do not want to do anything, while some people do not wish to do anything any day. For both categories, this anime is best suited for people who are categorized as “listless.”

Just saying, but Tanaka can even beat Nobita in the aspects of being a ‘listless’ student!

Who does Tanaka end up within ‘Tanaka-kun Is Always Listless’?

Even a non-fujoshi would agree with them being a couple. Well, not that only fans ship them, but even Tanaka says they are a couple! To shed light upon that, let’s take a few moments to recollect all the happenings that let fans assume such.

Tanaka and Ohta are, without any doubt, friends. Ohta is spoiling Tanaka in his ways. How so? Ohta carries him to and fro the school and even between classes. Ohta knows where Tanaka might be when he gets lost. Ohta never gets angry with Tanaka’s actions. Ohta is calm, just how a partner knows his/her partner the best. Yes, Ohta knows Tanaka the best, and Tanaka relies on Ohta too much. Tanaka sometimes makes remarks stating he and Ohta are like an ‘old couple.’ Tanaka also once said to Ohta how he would make a good wife!

There are instances as well where Ohta looks good with just being Tanaka’s friend, and this then comes with a pang of looming guilt feeling for the fans!

Well, true that Shiraishi has a crush upon Tanaka. But does Tanaka feel the same? Well, no, but let’s not brood over that and see if both suit each other.

Tanaka was able to recognize the dweeb Shiraishi which she had been hiding from all her classmates all this time. How was he able to do so? Does he like her? The answer is not what you are looking for. When Ohta asked Tanaka how he was able to tell her apart at first glance, even though her vibe changed, he answered, “her chest size was recognizable.” A perverted Tanaka indeed.

Ohta recommended Tanaka not to say anything about this matter to Shiraishi. Smart Ohta! Shiraishi, after this incident, tried talking with Tanaka. Both of them look good, without any doubt. Tanaka and Shiraishi are always helping each other.

Yet, Tanaka does not see Shiraishi as his love interest and indeed treats her just like a friend. Guess she has been friend-zoned. Not that Tanaka dislikes her, but he just does not want to overwork himself by spending his energy on such feelings! Nothing beats a listless person indeed!

Both of them are hard to imagine together, but surprisingly, they look good. At first, Miyano wanted to be Tanaka’s apprentice. Even though he refused, he gave up because it would have been more of a hassle to turn her down than to make her one.

While that wasn’t the case, fans had the idea that Miyano may like Tanaka. Even though their personalities are opposites, they do look good together. If it had been under normal circumstances, they would have suited each other, is all can be said.

This ship may be hard to imagine, but let’s not forget that even Echizen once thought of Takana as her partner. Sure, that might be a misunderstanding, but that still happened. Leaving everything aside, let’s ship Tanaka and Echizen.

Once Tanaka was down with fever, he couldn’t write the name Echizen, as he was communicating via writing. He instead asked Echizen to rename herself either Ohta or Tanaka. With this, Echizen was left with a huge misunderstanding on her own. This also led her to imagine Tanaka as her partner, which was kind of cute.

Echizen is tall. Her height is somewhat similar to Tanaka’s. Even if they were to become partners someday, a shorter boyfriend wouldn’t be so bad. So, both of them would look good.