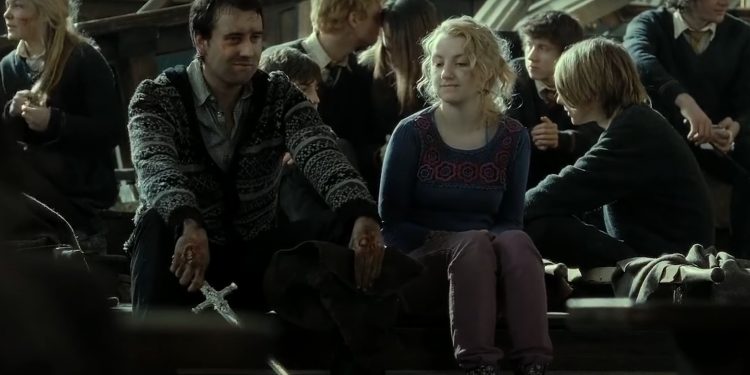 Who Does Neville Longbottom End Up With in Harry Potter?

Who does Neville Longbottom end up within Harry Potter? Of all the minor characters in the popular J.K. Rowling seven-book series, this one made a significant breakthrough in Book Seven, titled “The Deathly Hallows.” Neville Longbottom was, for the much part of the book series, a secondary character and pretty much a loser in the series. He was often teased by his peers and the object of scorn by many teachers. Moreover, he wasn’t much but a referential character during dialogues in the Common Room, at class, or in the dorm.

But Rowling carefully planned out his story and many others along the way. Giving Neville the chance to make a name for himself in bravery in the crucial moments of The Deathly Hallows book. While he had a bit of a rough childhood, he was raised by his grandmother. His parents were killed by Bellatrix Lestrange and three other Death Eaters. Now let’s take a look at who does he end up with at the end of the book series.

After the messy events of the student rebellion, Neville Longbottom marries his former classmate Hannah Abbott. She is a half-blood witch from House Hufflepuff and a member of Dumbledore’s Army. During the Battle of Hogwarts, she fought bravely with other students in defense of secret passages of the school from the invasion of Death Eaters. Later on, Harry Potter saved her and Seamus Finnigan from a spell that Lord Voldemort sent their way. Hannah Abbott finished her studies at Hogwarts and then became a landlady at The Leaky Caudron. She lived there with Neville happily and had a daughter with him called Lana. Also, Neville is the godfather to Harry Potter’s second son, Albus.

Hannah Abbott was born in 1980 in Great Britain. Her wand —of unknown length— is made of wood and core, and she got it like most witches and wizards at Ollivander’s shop at Diagon Alley. Additionally, during her years at Hogwarts, she oftentimes teased Harry Potter when she wore “Support Cedric” and “Potter Stinks” badges during the Triwizard Tournament Controversy that had two Hogwarts Champions. And lastly, she was also a Prefect. Hannah and Neville had a lot in common because Death Eaters caused a lot of pain in their families, and a desire for justice brought them together. She saw in Neville’s leadership of the Dumbledore Army the traits she liked in a partner and embarked on a relationship with him.

Who is Neville Longbottom?

Neville Longbottom is a wizard from Gryffindor House at the Hogwarts School of Witchcraft and Wizardry. He studied alongside Harry Potter, Hermione Granger, and Ron Weasley. He’s a pure-blood wizard, son of two powerful wizards that were Aurors from notorious wizarding families and former members of the Order of the Phoenix. Sadly, his parents fell to Bellatrix Lestrange and died. So Neville was raised by his stern grandmother.

He was often portrayed as a shy boy. He was the object of teasing, mockery, and nasty jokes by everybody. But J.K. Rowling cleverly put many breadcrumbs along the way for us that made Neville a fantastic character in the end. Because many people forget that he took out Ginny Weasley for a dance, and that made Harry take a look at Ginny. Moreover, not only did he have that cool, but he was also smart, managing to get several “O.W.L’s,” but Neville did a heroic feat in the crucial Battle of Hogwarts.

Neville Longbottom made a crucial act of heroism when in a key moment of the battle, right after Harry informed him that Voldemort’s Snake was a Horcrux and that it needed to be destroyed, our boy Neville gets Godric Gryffindor’s sword out of the Sorting Hat and slashes Nagini, the evil Snake that killed so many people on Voldemort’s behalf. This was quite a feat for this shy, clumsy dude, who in the nick of time gets a lot of courage and bravery and destroys Lord Voldemort’s last Horcrux leaving him utterly powerless.