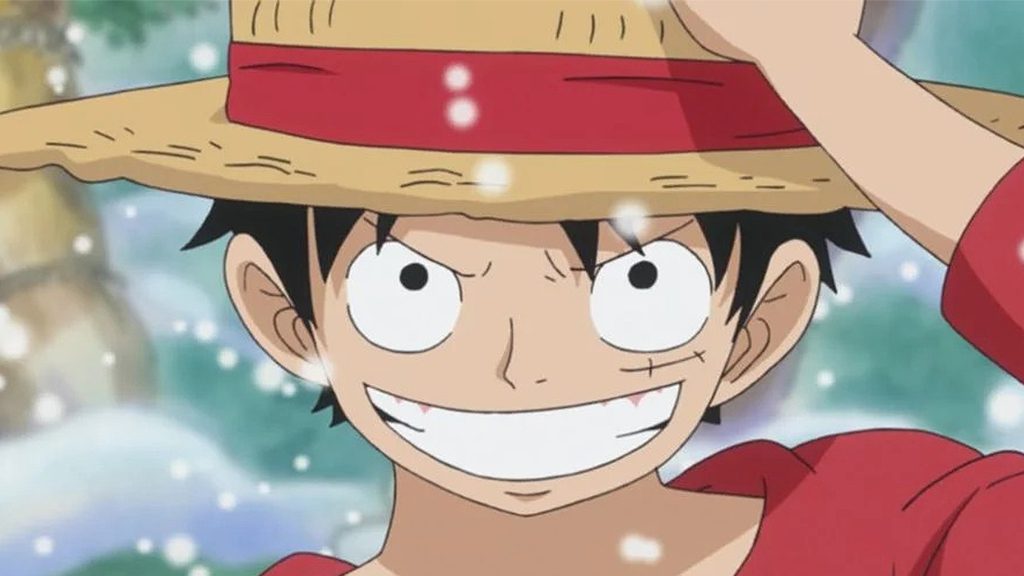 Who Does Luffy End Up With In The ‘One Piece’? The Shonen series began airing in 1999 and currently is at episode 987. Whereas the manga was serialized in July 1997. It’s been over two decades, but the journey to find the greatest treasure and become the “King of Pirate” is still ongoing. There is no doubt in this long journey, otakus came along with some excellent characters which hooked us to this show. If you want to follow the journey of Luffy, then you can watch the anime on Crunchyroll and read the manga on Viz.

Since the first episode or the first chapter, we fell in love with the main character, Monkey D. Luffy. We witnessed the epic journey of our rubber boy from being the naïve kid in the ocean to become one of the most notorious pirates. On this great journey, Luffy came along with many prominent characters and especially the female characters. Therefore, fans are eager to know with whom will Luffy end up? There are so many speculations about this topic. But ‘One Piece’ creator always said the series focuses on friendship rather than on romance. So we might not see some great romantic plot surrounding Luffy. But we can explore the plot till now and find the perfect match for Luffy to end up with.

What happened in One Piece so far?

Monkey D. Luffy is a young man who sets off on a journey over the vast sea to find the legendary treasure, One Piece after a powerful pirate “Red-Haired” Shanks inspired him when Luffy was young. While on the journey, Luffy assembles his own pirate crew. This crew comprises Roronoa Zoro, a swordsman; then befriends Nami, a thief and navigator, who’s the first female member of the crew; they come across a pathological liar and sniper, the “Great” Usopp; and a powerful fighter and perverted chef, Sanji, joins the crew. Finally, they get their first ship, Going Merry, and sets on a journey under the pirate name of Straw Hats. later on the journey, a reindeer and doctor, Tony-Tony Chopper; Nico Robin, a former assassin and archaeologist; Frank, a cyborg shipwright, and Brook, a dead musician, and swordsman, joins the crew. However, Going Merry receives some severe damage, which was beyond damage. And Merry’s funeral made everyone cry. Then the team comes across their latest ship, the Thousand Sunny, and finally, Jinmbei, a Fishman and former Seven Warlord, joins the Straw Hat crew as helmsman. 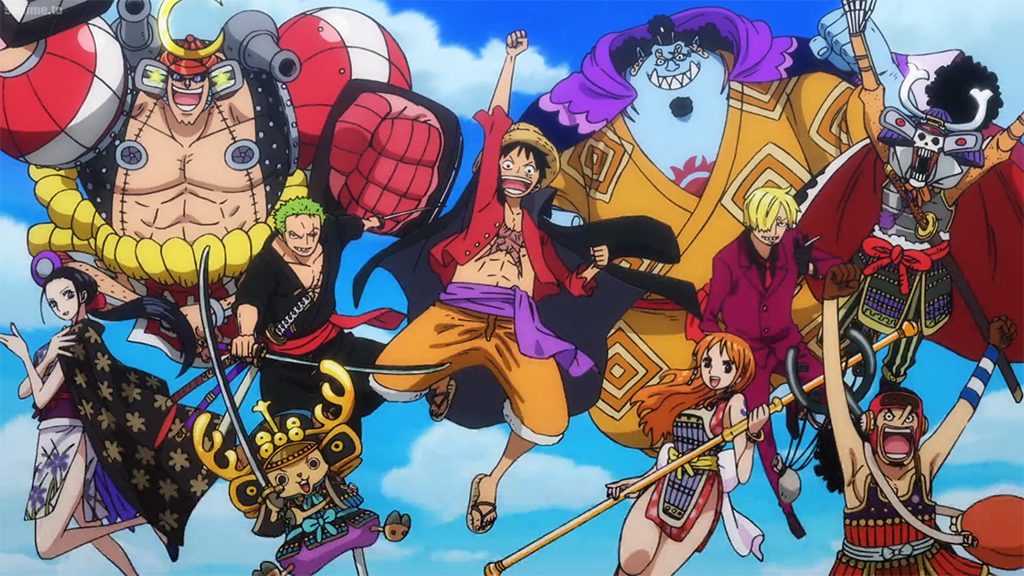 On this journey, we witnessed the Straw hat pirates came across many hardships and some great friends. “Mugiwara” Luffy attracted a lot of friends, women, and enemies towards him. Those people are not normal people because most of them are strong pirates, legendary marine officers, princesses, and nobles. Luffy also got his name known to the entire world after defeating four Warlords and also befriending two Warlords, where one is actually in love with him. Then we all remember him fighting alongside one of the strongest pirates, “Whitebeard” Edward Newgate during the Marineford War.

However, Luffy lost his elder brother, Portgas D. Ace during the battle, and we all felt his pain. There is no doubt this was the greatest arc of the series. Later on, Luffy also comes to know about his legendary parentage and also reuniting with a lost brother, Sabo. “Straw Hat” Luffy keeps growing stronger as he moves forward in his quest. Currently, he’s helping Kozuki Momonosuke to get back the throne of Wano from Kaido, the Strongest Beast in the World.

Who will Luffy end up with?

We know that “Straw-Hat” Luffy came across many phenomenal women in his journey. Even his crew comprises two such wonderful beauties, Nami and Robin. However, we also know that Luffy accepted them as Nakama or comrades. We can expect to witness no romantic plots between the members of the Straw Hat crew, apart from Sanji simping over Nami and Robin.

Luffy also came across beautiful princesses on his journey. Like Arabasta’s princess, Nefertari Vivi, who joined the pirate crew for a while. But she stayed back in her country after Luffy took down the Warlord Crocodile. Then we saw Luffy befriending the princesses of Dressrosa, Viola, and Rebbeca, whom Luffy helped to defeat another warlord, Donquixote Doflamingo. Finally, Luffy encountered the giant and gorgeous mermaid princess, Shirahoshi, whom Luffy protected from a stalker and helped her grow as a person. We have seen Luffy forming bonds with these princesses but none are romantic but more of friendships and some are also like sisters to the Rubber Man. 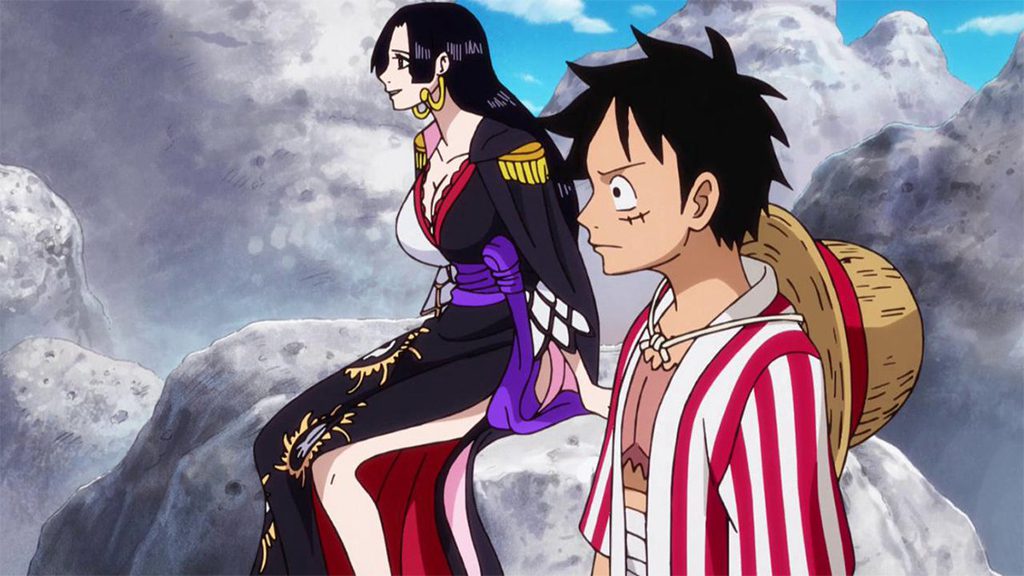 Straw Hat Luffy also met the most beautiful in the world, Boa Hancock. She is one of the Seven Warlords, making her a very strong pirate and thus, known as “Pirate Empress”. Further, she is also the leader of Amazon Lily, the Island of Women, where men can’t enter. Therefore, Hancock saw Luffy as a threat when Kuma sent him on this island. The Pirate Empress even planned to kill Luffy. But soon Boa’s perspective about Luffy changes when he protected her secret of being a slave once. After that Boa accepted Luffy’s kindness but also fell in love with him.

However, the Straw Hat captain rejected her romantic feelings because Luffy still doesn’t understand such a thing. But we can expect Luffy to end up with Boa Hancock. Because the warlord is not only in love with him but unlike other female characters, she never needed Luffy to protect her instead she can stand beside Luffy and even protect him. As we all saw when Boa broke her treaty with World Government to protect Luffy during the Marineford War.

Also Read: Who Does Yona End Up With In The ‘Yona of the Dawn’?