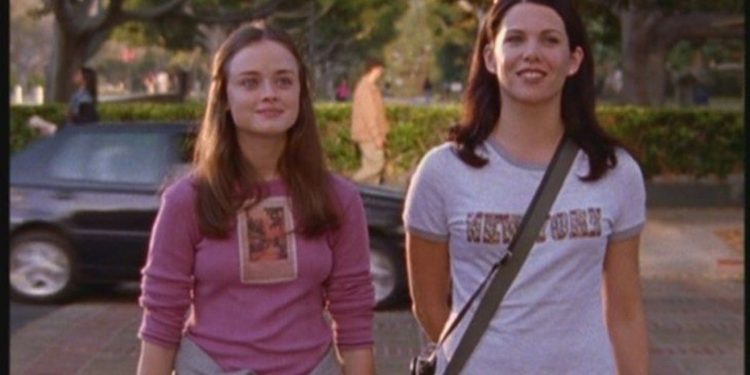 Gilmore Girls dropped its first episode on October 5th, 2000, on The WB network. It soon became a flagship series for the network as more and more people tuned in to watch the comedy-drama series created by Amy Sherman-Palladino. The show received critical acclaim for its witty dialogue, cross-generational appeal, and effective mix of humor and drama. Gilmore Girls is known for its humor and wholesome vibe, which leaves the viewers with a feel-good factor after watching it. The show has been cited in TV and Time magazine as one of the 100 greatest television shows of all time. As the show progressed further with its storyline, we got close to Lorelai, who, in turn, got paired up with several characters. But who does Lorelai end up with in the end?

Also Read: What does BMF mean on TikTok? All about the internet slang!

Gilmore Girls’ plot revolves around a mother and daughter, Lorelai and Rory Gilmore, played by Lauren Graham and Alexis Bledel, respectively. Lorelai got pregnant with Rory when she was a teenager. When her parents disapproved of this, she left her rich home and made it on her own in the town of Stars Hollow. Rory and her mother are very close to each other and have a beautiful relationship resembling more of a friendship. The show follows the lives of these two young women and all that they go through with their careers and love lives. The mother-daughter duo does have some differences and often fight, but they always come back to each other when times get tough.

The series also shows us how Lorelai reconnects with her parents through Rory. Eventually, the show focuses on not only Lorelai and Rory’s relationship but also the relationship between Lorelai and her mother. The show is mainly about family and friends and how they are the most important at the end of the day. It focuses on how the mother and daughter basically grow up together and learn all that life entails. It is best explained by one writer who said that the brief given to them was, “This show is about a mother and daughter who are best friends as well as being mother and daughter, and every conflict and dynamic should ticktack back and forth on that one point.”

Lorelai had two main romantic relationships on the show. The first of which was with Christopher Hayden, played by David Sutcliffe, who is, in fact, Rory’s father. Chris and Lorelai have known each other since they were six years old. They began their relationship when they were teenagers, and at the age of 16, they became pregnant with Rory. On learning this, Chris agreed to marry her and work for her father, even though he wanted to travel the world. Lorelai refused his proposal and raised Rory on her own. Chris comes back in her life when they are adults as he wishes to reconnect with his daughter. They begin their relationship again as adults and spontaneously get married. However, they have many problems in their marriage, which eventually does not work out, and they get divorced. Although they do remain on good terms and he remains a part of his daughter’s life.

Lorelai’s second main love interest on the show is Luke Danes, played by Scott Patterson, a café owner in Stars Hollow. Luke and Lorelai have a “will they, won’t they” relationship on the show since the beginning. They finally begin their relationship in the 5th season of the show. Their relationship becomes complicated after Rory’s dad, Chris, comes back into her life, and they break up. They, however, never stop loving each other, which is what actually causes the friction in Lorelai’s marriage with Chris and, eventually, their divorce. They eventually get back together in the series finale. Their relationship went through many phases and was like a rollercoaster ride for the fans of the show.

Who does Lorelai end up with?

When it comes to who Lorelai eventually ends up with, fans were very happy to know that she married and eventually ended up with Luke. In the mini-series revival on Netflix, Lorelai and Luke get married. Fans of the show were very happy with this being the endgame for Lorelai. It is nice to see two characters who fans have shipped all along finally end up together. Their relationship is a perfect example of this. Although the mini-series did end with a bit of a cliffhanger for Rory’s story, fans are very happy with the closure they got from Lorelai’s. The show remained well-loved till the end. If only more shows would end on such a happy note and satisfactory way for its fans.

Also Read: Who Does Petra End Up With In Jane The Virgin?