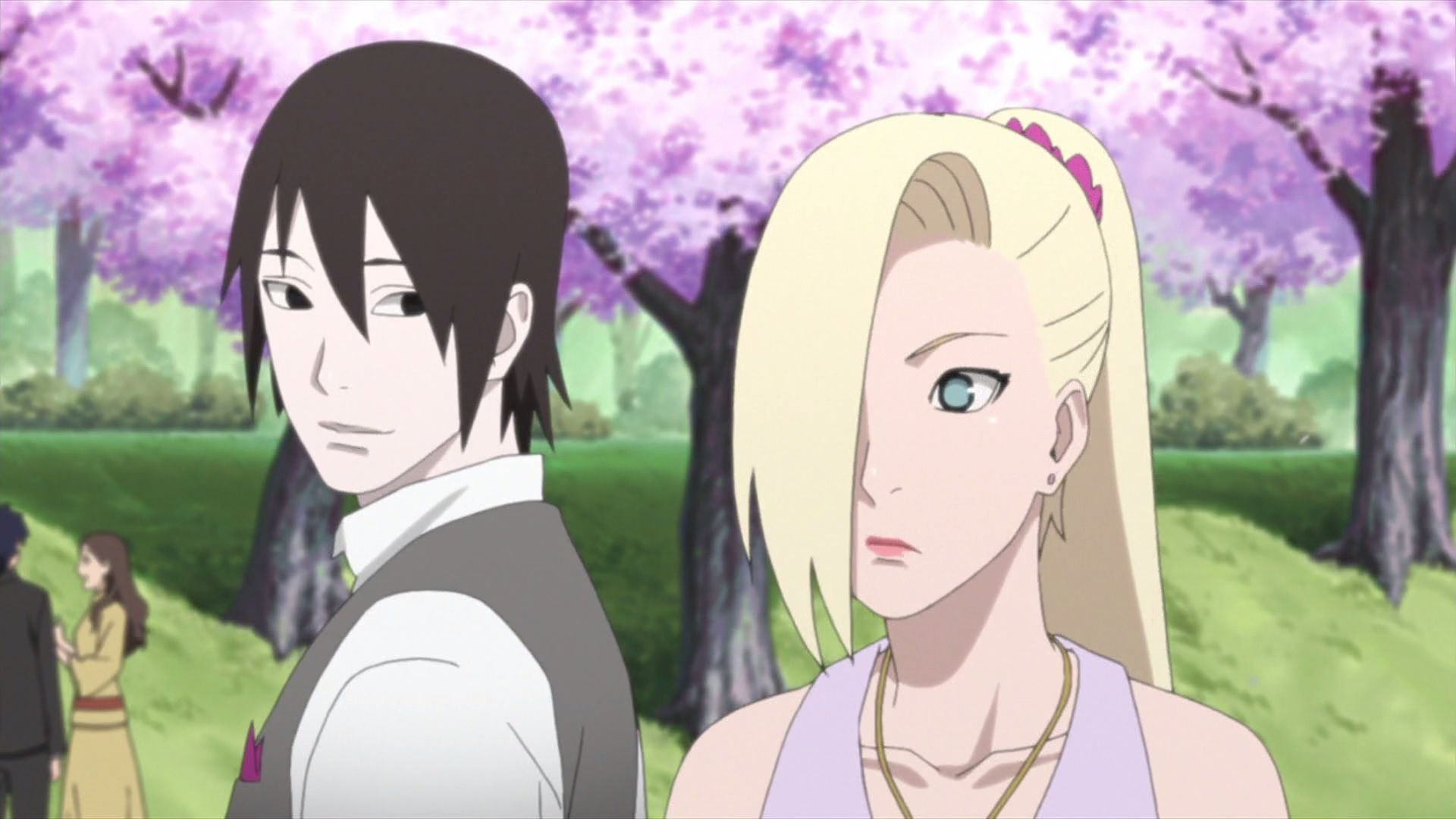 Ino and Sai at Naruto's wedding

Ino and Sai remain one of the most underrated and often overlooked couples in the Naruto-verse. Amidst a slew of couples and pairings, Ino and Sai might very possibly be the hottest and cutest couple around. While their story began with a much more facetious start, it progressively got seriously warm and wholesome. One of the reasons why Ino and Sai make for such a great couple is the contrast in their personalities. Ino is the loud, exuberant, and animated one, while Sai is like a slab of wood. However, with time and Ino’s affectionate company, Sai did develop and retain his emotive personality back.

Ino and Sai’s love arc starts with a funny encounter. The eccentrically stoic and emotionless Sai thinks Ino is ugly. However, he calls her Ms. Beautiful. At this point, Sai resembled a machine more than a human. Great at combat and jutsus, Sai was a blank slate when it came to emotions. While everyone was kind of weirded out by Sai’s expression-less candor, Ino was an exception. She took a likeness to his eccentricity, most probably because he resembled Sasuke. Ino was, at that time, infatuated with Sasuke and would constantly battle Sakura over courting Sasuke. In many ways, Sai’s blank canvas of a personality resembled that of an indifferent Sasuke. However, Ino was only slightly amused and interested in Sai while he had no idea of love and dating. 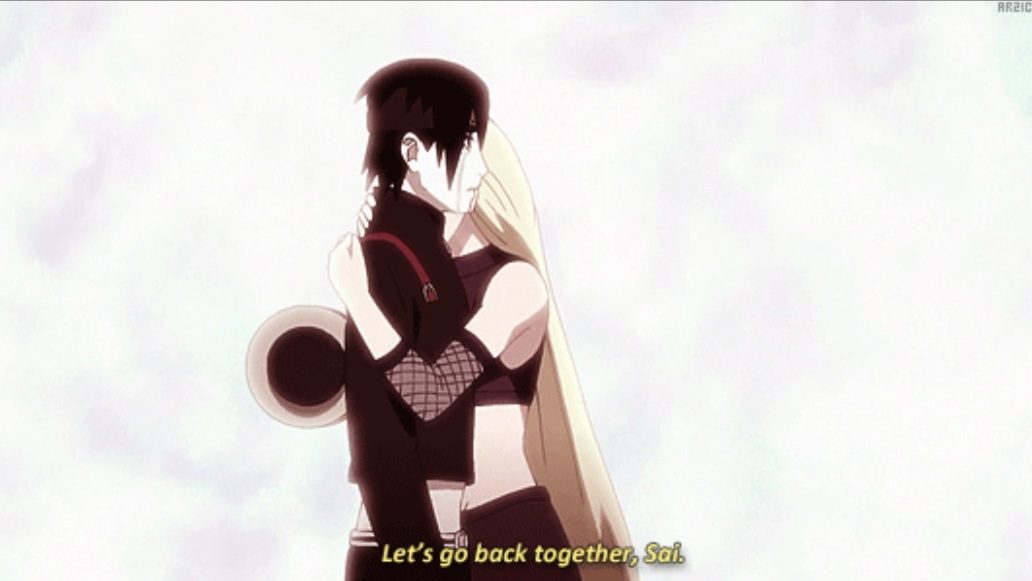 Ino and Sai: During the Infinite Tsukuyomi Arc

Over the years following their first encounter, these two would witness a wholesome and one of the more underrated relationships. What started as a sidelined humorous dynamic blossomed into one of the strongest relationships in all of Naruto canon. It’s a shame we didn’t get more Ino and Sai moments in Naruto anime because they make for such a sweet couple. During the Fourth Shinobi World War Arc, we see that they have grown a bit closer since their first encounter. They barely received any screentime before that, so it was about time we got to see where they were now.

However, there wasn’t any significant development in their dynamic this time either. While they were captives under the Infinite Tsukuyomi, Ino dreamed of Sai duking it out with Sasuke over her. On the other hand, Sai’s dream involved a wholesome progression of his personality change. While this might not have been the most significant chapter of their love life, it did represent a small development. Ino’s top contenders for her courtship battle were now Sasuke and Sai. From exclusively infatuating over Sasuke to dreaming about Sai fighting over her too was definitely a change. Meanwhile, Sai also dreamed of Ino, but her role was much less prominent in his dream compared to the opposite.

Later Appearances and Continuation of Relationship

Unfortunately, the manga didn’t pay a lot of time to develop the relationship between them. However, the novels contended that deficit by giving some really cute and touching moments of tenderness and affection between them. In Shikamaru Hiden, Ino’s affection for Sai increases to the point of love. It starts when she reads the letters revealing Sai’s tragic past. Then she has to go on a mission to save Sai. The mission entails freeing Sai of a powerful genjutsu. Ino performs her soul-changing Jutsu to pull Sai out of his genjutsu capture. Traversing endless darkness, Ino eventually manages to get through to Sai’s soul. His damaged soul is comforted by Ino’s warmth and affection. As the two finally wake up from the Jutsu, Sai’s real emotive self comes out for the first time. He finally got his emotions and feelings back. 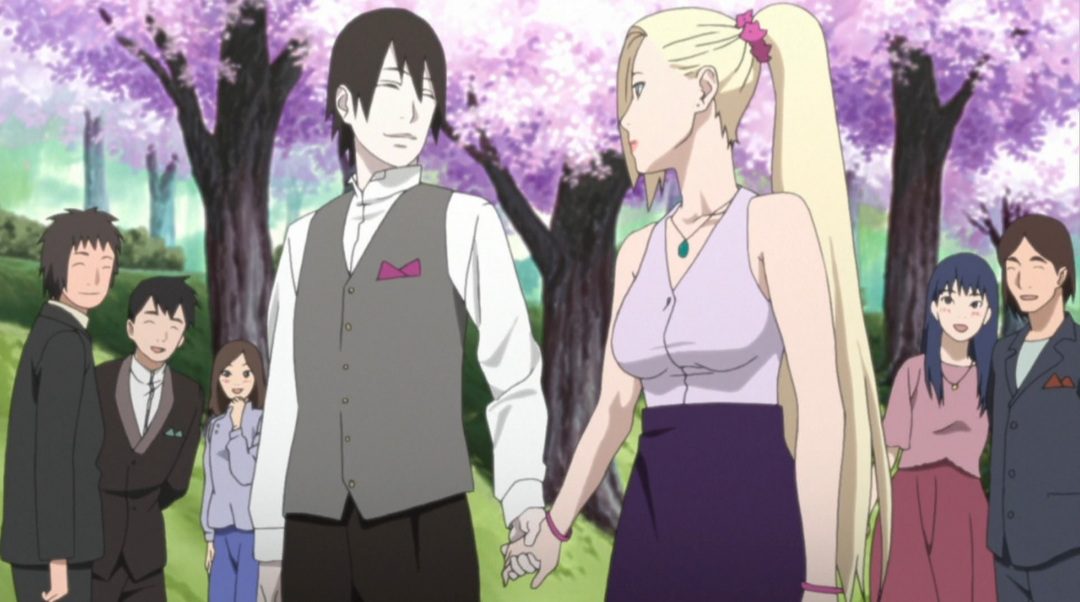 Ino and Sai attend Naruto’s marriage as a couple.

As Sai holds Ino’s hands and thanks her, he also sees Ino for the true beauty she is. Ino, on the other hand, truly falls for Sai. The next chapter of their relationship comes in Sakura Hiden, where they go on a mission together. They share some cute moments of light intimacy and work perfectly together. After saving Sakura and fighting together so well, they finally go on a date. They must have confessed their love for each other then since they appear as an official couple the next time. In Konoha Hiden, they attend Naruto’s wedding as the hottest couple around. In Sasuke Shinden: Book of Sunrise, we see how much Sai loves Ino. While she is admitted to the hospital, Sai remains by her side, devoutly sketching her face on numerous papers. Later on, Ino and Sai finally marry and have a son together.