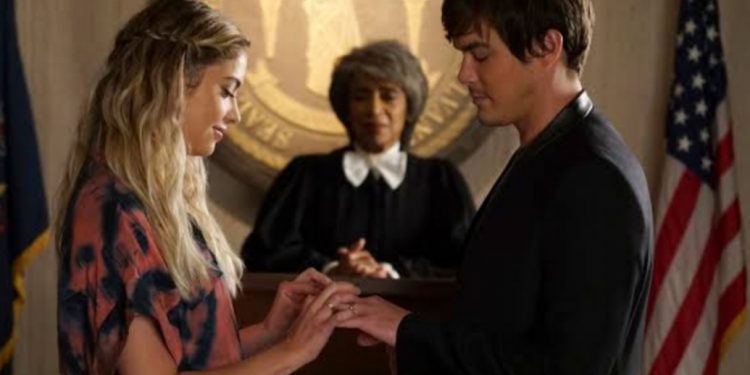 Fans are wondering Who does Hanna end up with in Pretty Little Liars? Yes, today we will discuss Hanna Marin. For those who aren’t aware of the series and her, let’s just start this article from the very beginning. Pretty Little Liars is an American mysterious drama series revolving around four girls- Spencer Aria, Hanna and Emily. The series shows the secrets of them which get revealed one after the other. It is a very popular series, and today’s article is based on one of its main characters, Hanna Marin. This fictional character has been played by Ashley Benson. In the later period of the series, Hanna Marin has played the role of a fashion designer.

With the unveiling of her secrets, fans who haven’t watched till the time of her pairing, are wondering Who does Hanna end up with in Pretty Liars? For more details about her sweet relationship and her character, you must read this article till the very end.

Also read: Where Is Pretty Little Liars Filmed? All About The Story And Locations!

Who does Hanna end up with in Pretty Little Liars?

In this series, Hanna Marin has ended up with Caleb Rivers. The two get married to each other and the role of her husband is played by Tyler Blackburn. In the finale, the couple, Hanna and Caleb are expecting a baby, giving the name to their baby boy as Aiden Rivers. They have always been an endgame couple and from the initial days, fans wanted them to end up together. Now, her pregnancy has been a bonus as it pushes her into a new challenge. Nothing better than this could happen to the love birds. The best part is Hanna Marin is ready to take up such a grown-up challenge.

Well, Caleb Rivers never thought that anybody would love him so much like the way Hanna does. He used to be more like a lonely person. When he meets the love of his life and things end up good, it seems like Caleb can move forward in his life with positivity. Now, since he is the husband and a father, it seems like he can put his past thoughts behind him.

To make it more romantic, Hanna and Caleb go camping where they share champagne. Not only that, the sweetest part is giving each other the paper rings. It signifies their immense love for each other. Thereafter, they ended up kissing each other. The fans rejoiced. Caleb throws a forest joke to Hanna saying that he would marry her right there if a bear could be ordained to marry them.

Also read: When Did Ezra and Aria Break Up? A Quick Pretty Little Liars Flashback

What You need To Know about Hanna Marin & Caleb Rivers

Well, starting this with Hanna Olivia Marin, formerly she used to work as an assistant to the fashion designer -Claudia Greco. Not only that, but in the series Pretty Little Liars, she also served as a clinical assistant. Thereafter, Hanna ended up being a professional fashion designer. She was born to Tom Marin and Ashley Marin.

When it comes to Caleb Rivers, in the series he is currently serving as the security at The Radley. Earlier, he worked for Jenna Marshall to spy on Hanna which got exposed later on. We have seen him being the son of Claudia Dawson and Jamie Doyle. Caleb excels in hacking and has a deep knowledge of electronics. We have seen him being in love with Hanna and kiss her while dating Spencer. This was also exposed to his girlfriend of that time (Spencer).

Where to watch Pretty Little Liars?

Also read: Who Is Samantha Jade Engaged To? Has The Singer Called Off Her Wedding?

JoJo & Dexter Darden Are Engaged! Relive the romance of these love birds