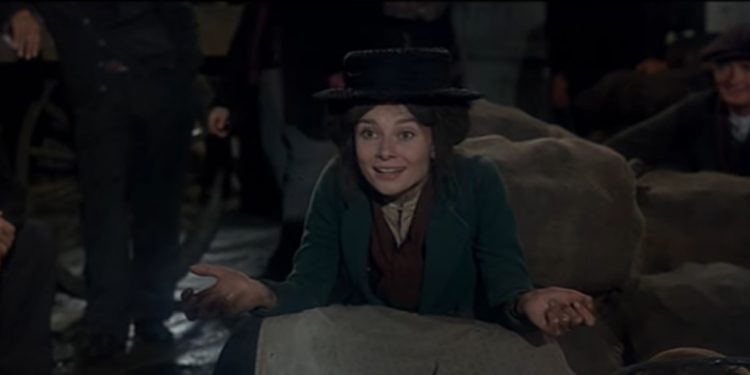 Who Does Eliza Doolittle End Up With?

When George Cukor decided to grab Lerner and Lowe’s stage musical adaptation of George Bernard Shaw’s Pygmalion, an instant classic was made. My Fair Lady was a success, but who does Eliza Doolittle end up with? The 1964 comedy starring the lovely Audrey Hepburn and Rex Harrison portrays a flower seller and an English teacher. The movie went on to become a box-office and critical success. It won eight Oscars, including Best Director, Best Picture, and Best Actor.

At five million dollars, the movie was ridiculously expensive to produce. And it was a gamble, so the producers had to embark on several deals to make it happen. But the gamble paid off because “My Fair Lady” grossed US $20 million dollars at the box office. Now, without any further ado, let’s take a look a the plot details here at Otakukart for this classic Audrey Hepburn film.

Who Does Eliza Doolittle End Up With?

Right at the end of this 1964 cinematic classic, Professor Higgins goes to visit his mother’s place. And to his surprise, he meets Eliza Doolittle there. The woman tells him that she no longer has interests in him. So, the professor now goes home walking, sulking in his paces as he finds out that deep down, he has feelings for the flower seller. Once he gets home, he begins to review the recording that he did when Eliza first visited him for those Cockney English lessons. And then he hears just how nasty he was to her.

Then, all of a sudden, Eliza Doolittle arrives at his door. And while the man is happy to see her, he suppresses those feelings because of Edwardian English ways and asks her about the whereabouts of his slippers. In the end, Eliza Doolittle and Higgins do end up together and are happily ever after. The writer, George Bernard Shaw, just wanted a literary cliffhanger. See? Even those are retro! Bear in mind, Eliza initially met Higgins in order to learn some fancy-schmancy Cockney English accent and grant her ways into social climbing.

Also Read: Who Does Andy End Up With in The Office?

Who Was Audrey Hepburn?

Audrey Hepburn was a British actress and fashion icon. Originally from Brussels, she studied ballet and performed in theaters in the London scene until she landed a part in several movies. Eventually, she rose to mainstream fame for the romantic movie Roman Holiday in 1953 with Gregory Peck. That role earned her an Academy Award, a Golden Globe, and a Bafta Award. Also, one of Audrey’s most iconic roles comes from her work in “Sabrina” with Humphrey Bogart and in the famous “Breakfast at Tiffany’s”.

For her role as Eliza Goodwill in this movie, her singing parts were dubbed because the producers weren’t happy with Hepburn’s singing. Although she was a great actress and had a beautiful face, the producers considered her singing sub-optimal and had Marni Nixon dub her parts.

Who Was George Bernard Shaw?

George Bernard Shaw was an Irish playwright who won the Nobel Prize in Literature. He wrote Pygmalion, Caesar, and Cleopatra, Major Barbara, Saint Joan, among others. On the political side, he was a hardcore socialist, an anti-vaxxer (which makes you wonder what he would think of the current COVID pandemic and its vaccination), and he promoted racial eugenics. He used to write most of his works in a hut in his yard. But not just any hut. This was a rotating hut!

Where to Watch My Fair Lady?

Also Read: Who Does Neville Longbottom End Up With In Harry Potter?