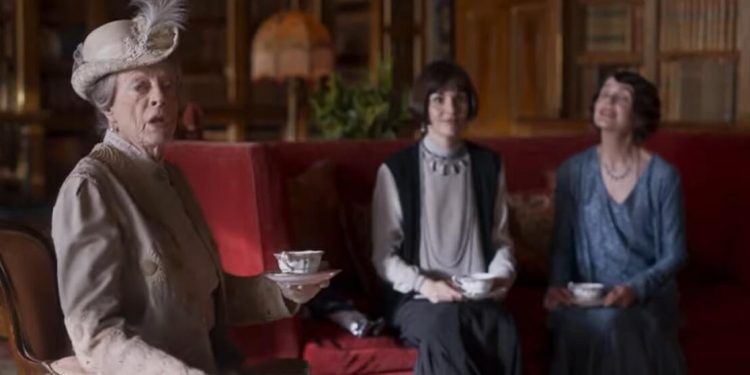 The Queen Of England

Historical Dramas are popular among the audience of today’s generation! Their TV series and films make us feel like we are among the characters, although we are not. Downton Abbey is one of the best historical drama franchises! The film version of Downton Abbey is a renewal of the TV Series. The main cast is the same with Huge Bonneville, Jim Carter, and Michelle Dockery. The film & the series is set in the early-20th Century of England. The filming for the show & movie got primarily done in the United Kingdom. It is a location that gives the perfect taste for any project set in the 20th Century! As we move ahead in the article, we will learn more about the Downton Abbey Filming Locations.

It all began in 2010 when Julian Fellowes created the Tv Series Downton Abbey. It was a British TV Series that premiered on September 26, 2010. Co-written by Shelagh Stephenson & Tina Pepler, the Tv Series ran for five consecutive years. Centered on the 20th Century, the show had a massive cast. Fellowes’ Downton Abbey operated for six seasons, with every season consisting of seven episodes. Each episode ran for an average running time of 60-70 mins. The final episode of the series was on December 15, 2015.

Also Read: Did Lord Grantham Have An Affair in Downton Abbey?

Downton Abbey Filming Locations: All The Production Locations Of The British Historical Drama

The first and foremost location of Downton Abbey is the Highclere Castle. It is in Hampshire, England. Giving the majestic impression, the Highclere Castle is the chief location for Downton Abbey. The manor house was home to the Earl & Countess of Carnarvon. Julian Fellowes, always wanted to work on the site since he started writing Downton Abbey. The Highclere Castle is only open during the summertime. Many films use the Castle to complete their Historic based films! The Alnwick Castle has got used in several films. Fellowes’ Downton Abbey is one bright example! The series renamed the fort as the Brancaster Castle. In the fifth season of Downton Abbey, there was a famous scene of Lady Mary & Henry Talbot. It was 2014, Christmas special, and both were dancing in the library!

Lady Sybil fled with her servant, Brandon, from The Cotswolds. It is a region in south-central, in the western part of England. The lovely scenarios are one of the landmarks of Cotswolds. Later on, the two traveled to Swinbrook, in Oxfordshire. Just like Cotswolds, Bampton too has beautiful scenarios and natural attractions! The Downtown Village and Crawly House got filmed in Bampton, Oxfordshire. The third season shows that Bates got imprisoned in a York Prison. Actually, the locker is in the Lincoln Castle, two hours south of York! Scotland is the only foreign location where Downton Abbey got filmed! The Grand dinner in season two got held in the Inveraray Castle of Scotland. The castle is home to the Duke of Argyll. Downton Abbey’s other locations are Haxton Hall & Kensington Gardens. You can find both the locations in London. That’s all for the Downton Abbey Filming Locations!

Also Read: Where Is Jaws Filmed? All The Filming Locations Of The 1975 Thriller

Film Review: Did The Film Do Well Enough To Match With The TV Series?

Michael Engley’s Downton Abbey provided the much-needed conclusion to the popular tv series. If you are a fan of the Tv series, then the film version is a must! It is a huge hurdle to create a movie based on a TV show. Especially when the tv series has tons of twists and turns! Apparently, the film turned out to be nostalgic for all the Downton Abbey fans! It brought back all the memories that Julian Fellowes had created ten years back. Downton Abbey got a beautiful reception from the critics. The same goes for us, as it did not disappoint us one bit!

If we go deeper, the movie honestly had no plot! Of course, the wiki has an essay to write! Except for the part where the King of England visits the Queen. Well, that was enough for a plot! I loved how Tom helped in operating the Downton Abbey Dynasty & aristocratic lifestyle. He surely has come a long way. His character development is striking! I also loved how Julian taught the royal family members to handle their lives. They also started taking care of others, which was unseen before! One of the best examples is when Barrow worked for the Granthams. So all together, this was a masterpiece by Michael Engler. We suggest everyone to watch it!