City Slickers, a 1991 American western comedy film directed by Ron Underwood, was a one-of-a-kind movie that won an Oscar. 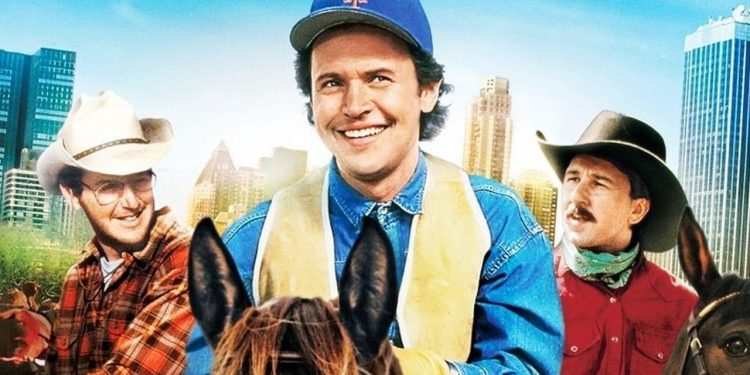 The poster of City Slickers.

City Slickers is a goofy comedy about white-collar males on a cowboy ranch. City Slickers’ filming locations were in the range from New Mexico to Colorado. The classic comedy gives you jam-packed belly laughs and also tears in your eyes.

The protagonist, Mitch Robbins, is a middle-aged radio ad salesman in a big metropolis. He, along with his two friends Ed and Phil, is going through a mid-life crisis. They decide to go on a two-week vacation in the untamed west transporting cattle from New Mexico to Colorado. Under the guidance of a strict cowboy Curly, the three of them take themselves and their troubles on the road. The friends bond and discover things about themselves.

The movie deals with the difficulties of life in a very naturalistic way that does not get in the way of comedy. The three friends and the male bonding they share in the movie are quite heartwarming and convincing. Let’s talk more about where City Slickers was filmed!

Also Read: Where Is Little Women Filmed? All The Locations Revealed

The Filming Locations of City Slickers

The movie was mainly shot in New York City, New Mexico, Durango, Colorado, and Spain. Lowell Ganz and Babaloo Mandel wrote the screenplay for the film. Unlike a lot of movies, City Slickers used real locations to shoot the film.

One of the most famous places in the movie was Fisher Towers, Utah. The cattle drive scenes in City Slickers were filmed in the stunning display of red rock spires. Fisher Towers is between Moab and Monticello, Utah, in the Bureau of Land Management’s Canyon Rims Recreation Area.

The film’s protagonist, Mitch, is from Pamplona, Spain, whereas Phil is from New York City. The ranch in the movie as a filming site is in Colorado’s La Plata County. The beautiful ranch is in the midst of the southern Rockies, just a few kilometers west of the cowboy town of Durango.

What Is The Plot Of City Slickers?

The story revolves around three friends. One of the three friends, Mitch, is a 40-year-old. He has a wife and two children who live in Manhattan. Mitch feels he is trapped in a mundane existence. He is dissatisfied with his job and ends up giving an embarrassing, boring speech at his son’s school during career week. This leads to Mitch’s wife asking him to go find his happiness.

He goes on a two-week vacation to work on a ranch with his friends Ed and Phil. After learning the basics of riding and roping, they go out into the woods on a cattle drive led by a cowboy, Curly. He goes on to teach the three friends how to become real cowboys. Curly has a rumor floating that mentions him murdering a guy and seems to despise Mitch right away. The whole movie is a rollercoaster of emotions. Mitch, Ed, and Phil face various problems during the journey, some predictable while others unexcepted and even harmful.

The concept of a journey of self-discovery is not something out of the ordinary in cinema, but the writers made it in a humorous, innovative, and heartwarming way. This addition to the collection of humorous movies is praise-worthy.

Also Read: Where is John Wick Filmed? All of the Production Locations

Some Interesting Facts About City Slickers

Crystal, who plays the role of Mitch in City Slickers, got the idea for the film while watching TV. He came across a show about a group of middle-aged men bragging about their trip to a fancy place and how it had improved their lives. Crystal mapped out the entire film, and Lowell Ganz and Babaloo Mandel started screenwriting it soon after.

One of the actors in the movie, Daniel Stern, was so taken with the ‘City Slickers’ experience that he purchased a cow ranch of his own! The movie not only inspired Daniel to buy a ran, but it also sparked a boom in the ‘dude ranch’ industry in 1991. One can only imagine how beautiful City Slickers’ filming locations must be.

Many of the viewers might not recognize Jake Gyllenhaal in the movie. It was his debut movie as a child actor. Jake played the role of Mitch’s son where he was ten years old! Another surprising fact is the actor who played Ed in the movie, Bruno Kirby, was allergic to horses! He would take an injection of allergy medicine before a day of shooting with horses.

Billy Crystal liked the horse he filmed with so much that he was gifted the horse. Once the making of the film wrapped up, Crystal’s agent gifted him the horse. The horse’s name was Beechnut, and he lived for 27 years.

Also Read: Where Is Home For The Holidays Filmed? All The Locations Explained