Hallmark's wonderful piece is worth-watching. Get ready to have some festive vibes. 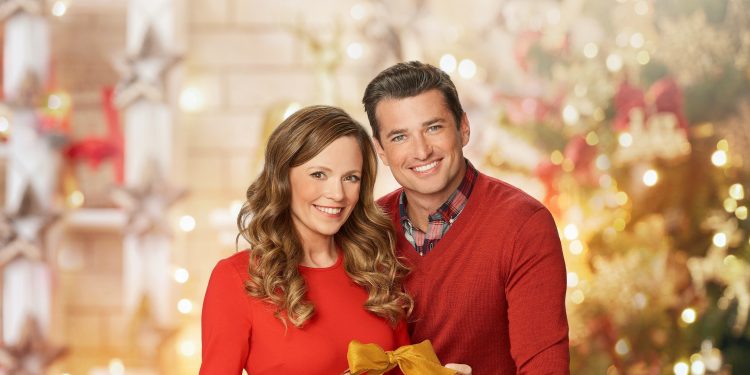 When Ryan sees Julia in the red dress across the hall at the dance, his heart skips a beat. Many of us were drooling over that moment. The romantic masterpiece is a light-hearted story that makes us feel full of warmth because of the movie’s script. There were numerous Christmas activities that both the families of Ryan and Julia enjoyed, and the insanely decorated Crawley’s Inn is a treat to the eyes. With full of Christmas festivities, this movie gives us pure happy vibes. The film was aired on Hallmark’s Channel.

The movie starts with Julia Crawley, a lawyer by profession, coming back to her home, Rocky Mountain, to enjoy the Christmas holidays with the family. She comes to know about her family’s inn and how desperately they want that back. She is all caught up in the feud between her family and the family of a man who later becomes her love interest. The story takes twists and turns, making it exciting to the audience. Things go well initially, but things get complicated once the love blossoms. This compelling watch makes you glued to the seats for the whole time.

Also Read: Where is Appetite For Love Filmed? All About The Locations

Cast of check Inn to Christmas

Lead actors Rachel Boston and Wes Brown played Julia Crawley and Ryan Mason. The chemistry between the two is appreciated all around. Hallmark was all set up to give us Christmas vibes. Rachel Boston is a great actress and producer who has worked in many independent movies. Wes Brown is an actor best known for his role as Luke McDonald in the second season of ‘True Blood.’ Wes had appeared in approximately 11 Hallmark movies to date. Wes was also a regular on the NBC primetime drama Deception.’ he played Julian Bowers.

Other casts present in the movie are Richard Karn, Christopher Cousins, Emiliano Díez, Tim Reid, Anna Daines, Charla Bocchicchio, Barta Heiner, Logan Donovan, Jan Broberg, Yolanda Stange, and Cindy Perez. Wes Brown was the executive producer of the movie too. The family members of Wes Brown also made guest appearances in the film. His 101 years old grandmother also came to the movie, which is a precious moment to capture. The festivity with family is the best thing to happen, isn’t it?

Where is Check Inn to Christmas filming location?

The beautiful film for some and overdone for a few, ‘Check Inn to Christmas’ has mix audience. People adored the movie and said it seemed like it was a reality. The critics had some different movie reviews because of the indulgence of high family drama which they found exaggerated. Whether positive or negative, the reviews have helped the movie to grow a large audience. The sets were so enticing that everyone wanted to be a part of their Christmas celebrations. The trailer was full of romance, family love, and party vibes when the trailer was released. It had the whole crux of the movie, though, but who will miss the cuteness of this onscreen couple?

The movie was filmed in Utah, famous for its beautiful landscapes. The lead actress Rachel Boston had posted pictures on Instagram during the shooting of this movie. A little part of the movie was also filmed in Los Angeles, USA. Hallmark is known worldwide for its perfect movie locations. The holiday vibes are sure to get if Hallmark is there. The surrounding mountain range made the film a perfection from a beautiful point of view. It would be best if you visited Utah to have a scenic view to calm your eyes.

When was Check Inn to Christmas released?

The movie ‘Check Inn to Christmas’ was released on 26 November 2019. Rachel had posted a picture on Instagram in September 2019 and was seen giggling saying that she was celebrating Christmas in the month of September as they say; Who celebrate Christmas early are happier’ The movie has a simple but sweet storyline, and we leave it on you to judge whether it is worth watching or not. Follow us for more updates on your favorite celebrities, films, and shows.