When Does Luffy Beat Doflamingo? Battle of Two Conquerors

Today’s article is going to be about when does Luffy beat Doflamingo and it will be discussed here in great detail along with some other interesting facts. Donquixote Doflamingo or better known by his alias Joker was the main antagonist of the Dressrosa Arc he was also one of the Seven Warlords of The Sea. Doflamingo was the king of Dressrosa who usurped the crown from the previous King Riku Doldo III. Luffy vs Doflamingo was the first fight where we got to see an all-out battle between two conquerors. In this article, we will tell you about when does Luffy beat Doflamingo with great details. Straw hat pirates allied with Heart pirates during Punk hazard arc to take down the strongest creature in the world King of the Beasts Kaido.

Later it was revealed that Law aimed to take down Doflamingo from the beginning. Doflamingo with the help of Caesar The Clown was in business to make artificial zoan type devil fruits and his major buyer was Kaido. The initial plan was to destroy the Smile factory then Kaido will ultimately kill Doflamingo. Due to some unforeseen circumstances, they ended up taking Donquixote Family Head on. To know how and when Luffy beat the main antagonist Doflamingo stay with us till the end. 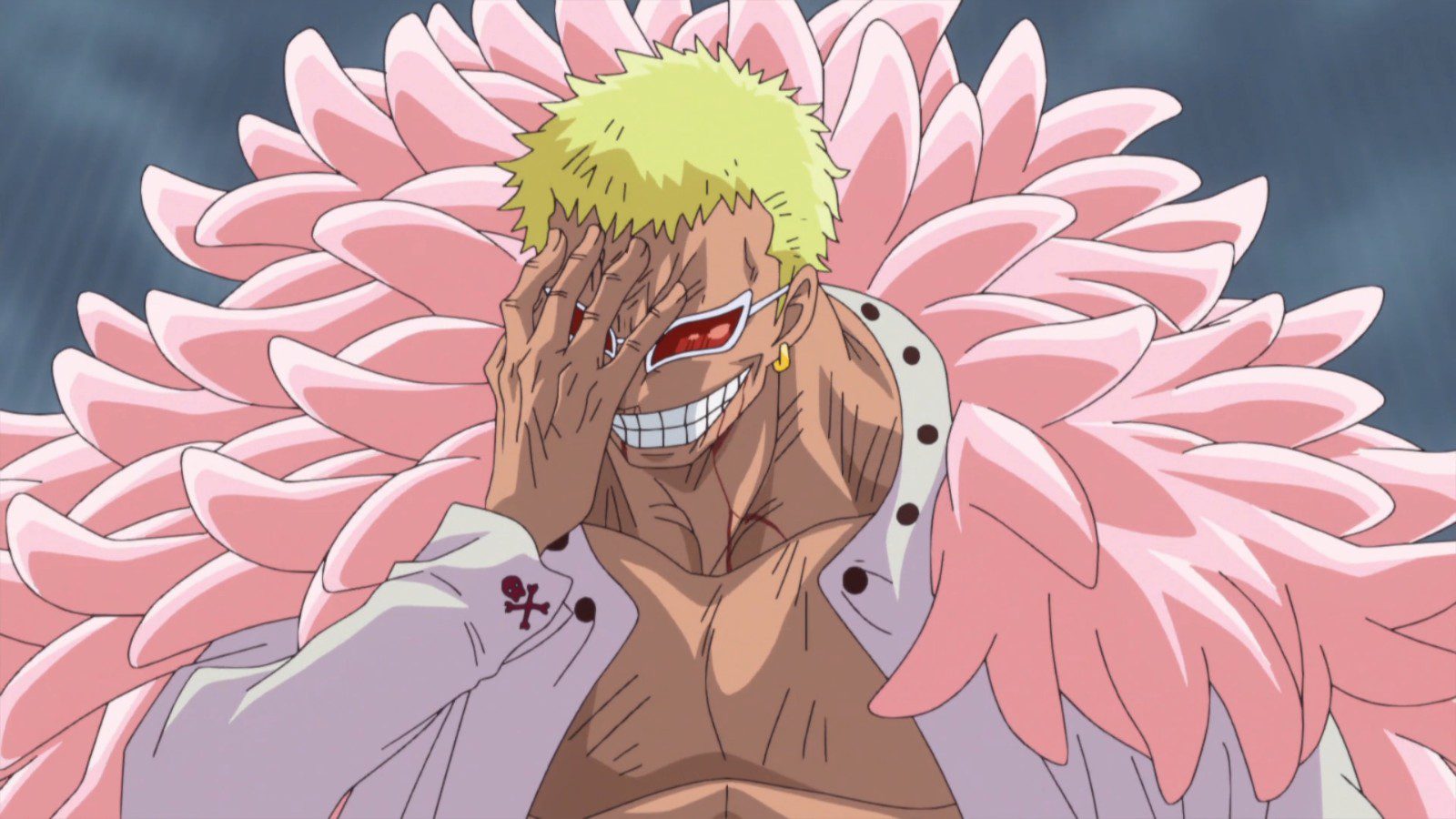 Doflamingo has the power of Ito Ito No Mi (Thread Thread Devil fruit) which allows him to repair his organs mid-fight which was a real nuisance because of any damage that Luffy did Doffy was able to just heal that. Apart from the healing abilities offensive power of Ito Ito No Mi was also off the charts with the help of threads Doffy was able to even split mountains. To make this fight even more difficult to win Doflamingo surrounded Dressrosa with Birdcage which started shrinking as the fight started to reach its climax.

Doflamingo created Birdcage to prevent anyone from leaving the island because every citizen of dressrosa found out about the true colors of Doflamingo and if the word got out about the ordeals happening in Dressrosa on navy’s watch and that too by a warlord, Doflamingo could very well lose his title of warlord and navy that offered its protection till now will come after Doflamingo which he couldn’t afford at any cost. 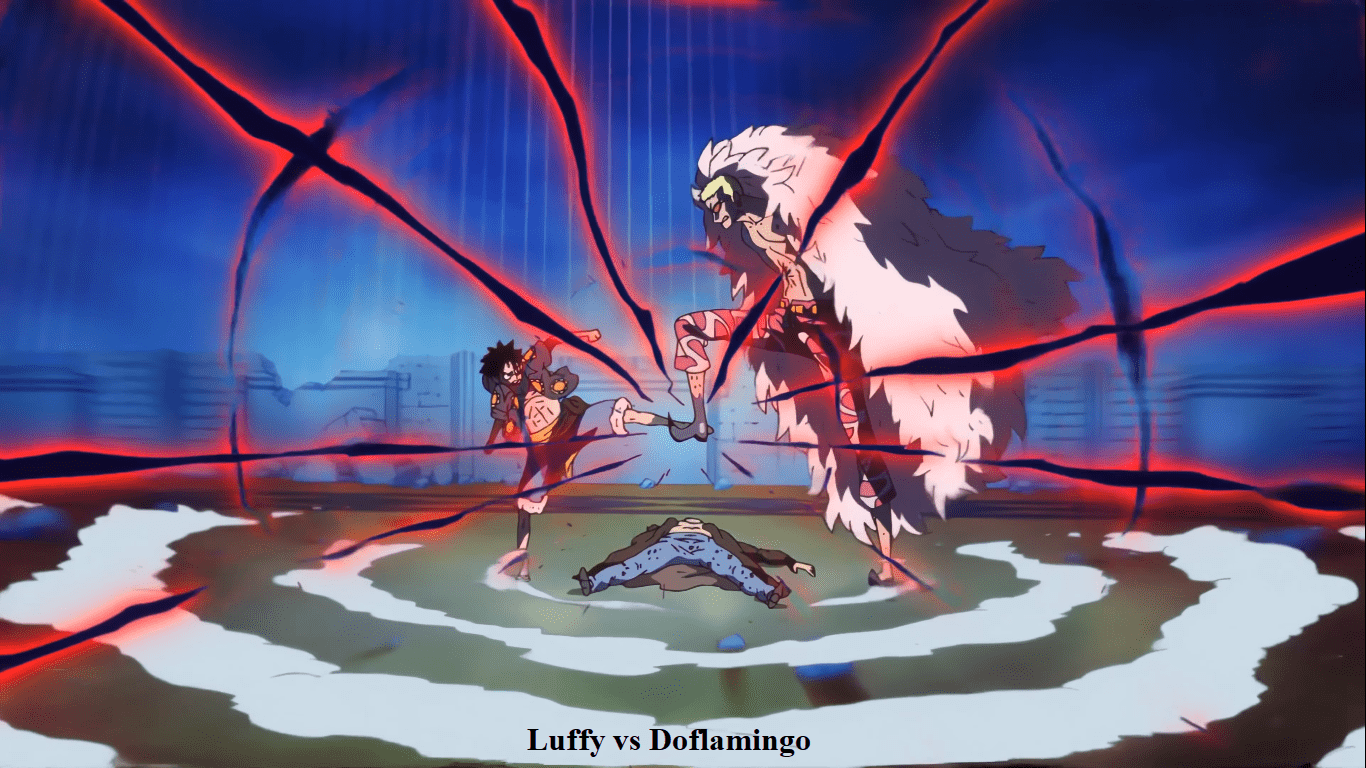 When does Luffy beat Doflamingo?

If this fight took place before Time skip Luffy would have been beaten in an instant by Doflamingo but it didn’t which gave every member in Straw Hats to fight on par with Donquixote Family. After fighting relentlessly against Doffy Luffy had no choice but to reveal his trump card to take down Doflamingo for good. Luffy activated his new technique “Gear 4 Bounce man” and as funny as it looked its destructive power was on a different level than that of Doffy’s but Doflamingo’s threat healing technique somehow kept him in the game. Luffy’s overpowered technique had a huge downside. As soon as his Gear 4 wears off he won’t be able to use Haki for 10 Mins which is exactly what happened Luffy’s Gear 4 wore off and was unable to use Haki and all the toll from the fighting started showing its effects due to which Luffy was unable to move. Thanks to the cooperation of the people of Dressrosa, Tournament contestants, and his elder brother Sabo who now yields the power of Mera Mera No Mi (Flare Flare Fruit) honoring the memory of his late brother Ace Luffy managed to survive 10 minutes.

In episode 733 ” Attack on Celestial, Luffy’s King Kong Gun of Anger ”  Luffy comes face to face with Heavenly Demon Doflamingo. Gatz announces Luffy’s Comeback in the fight and the fight between the two emperor’s resumes reaching towards its climax. After consecutive attacks by Doflamingo Luffy is sent flying and crashes into the rocks and Doflamingo attaches strings to Luffy and takes control of his body, realizing that he has no choice but to activate Gear 4 he does the same and transforms into Bounce Man breaking free Doflamingo’s control.

Luffy blasts off in the air and Doffy follows him as well after a small quarrel between the two Luffy unleashes his new attack “King Kong” to prepare for the defense Doffy prepares web-like string and bullets of string as his means of attacking. When the two attacks collide shockwaves are spread all around Dressrosa and out to the sea as well. With the impact of King Kong Doflamingo was sent flying through the ground beneath him. Luffy managed to take out Doffy with this single attack making him incapacitated.