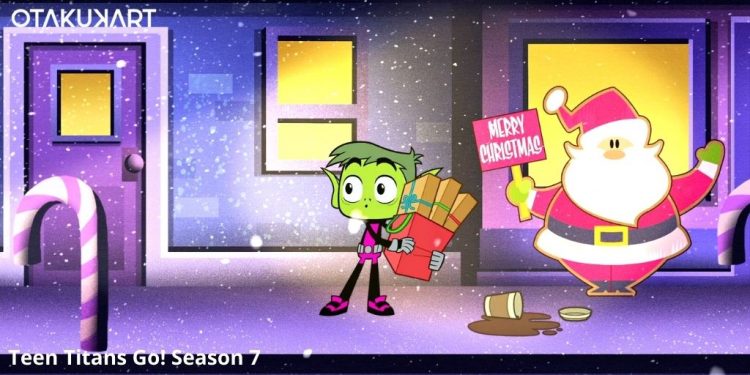 The fans and viewers are looking forward to the release of Teen Titans Go! Season 7 Episode 33. Whereas the previous episode focused on the holiday spirits of Christmas and New Year. Although, it had an interesting and fun take while depicting Santa Claus. Meanwhile, the show featured Beast Boy as the only superhero in the spotlight.

Moreover, Beast Boy had to work with Santa so that Santa could get back in the Holiday Mob. In addition to that, they had to prove their worth to Baby New Year who was the boss of the Holiday Mob. But things took a drastic turn when one of them turned rogue and tried to take control of everything. But the question was, what was the role of Beast Boy in all of this?

The animated cartoon series has been one of the most popular American animated shows since its premiere on 23rd April 2013. One of the major reasons behind the popularity is the characters of the show. The show features some of the most popular characters from the DC comics that have been fan favorites. The well-known American animators and writers Michael Jelenic and Aaron Horvath have developed the show. The show is currently airing its seventh season and the fans are eager to watch Teen Titans Go! Season 7 Episode 33. However, let us first take a look at what happened in the previous episode when Beast Boy met Santa Claus.

Episode 32 of Teen Titans Go! Season 7 came out on 8th December 2021. Moreover, the episode was titled “A Holiday Story”. The episode began with Beast Boy who was going to meet his friends after buying Christmas gifts for them. But things turned bad for him when he was captured by Santa Claus and his reindeers. Turns out that Santa had a mission for Beast Boy. Santa told Beast Boy a story about his friendship with Baby New Year who runs the Holiday Mob. Although, Baby threw Santa out of the Mob after finding out that Santa was trying to make a move on him and take over.

Santa told Beast Boy to dress up as an Elf and vouch for him in front of Baby to get him back into the Mob. After meeting Baby, Beast Boy convinced him to take Santa back. However, Baby asked Santa to prove his loyalty and told Beast Boy and Santa to go get his cut from some of the business associates who hadn’t paid him in a while. Santa and Beast Boy exactly did that as they first captured George Washington and forcefully took the money from him. After that, they paid a visit to The Irishman and took away his milkshake truck.

Lastly, they captured Tommy Groundhog and forced him to call in early spring on Groundhogs Day. Eventually, Baby got impressed with Santa’s work and took him back into the Holiday Mob. To celebrate the occasion, Santa took everyone outside and gifted a tricycle to Baby. However, as Baby was getting a feel of the tricycle, Santa and his reindeers took out their weapons and aimed at Baby and his accomplices. A shootout broke out between Baby and Santa’s gang and Santa was about to take over the Holidays by defeating Baby. Although, Beast Boy called the FBI on time and the Holiday Mob was put behind bars. It turned out that Beast Boy was undercover all along to expose the Holiday Mob’s operations and everyone involved in it.

Teen Titans Go! Season 7 Episode 33: When Will It Release?

“Teen Titans Go! Season 7 Episode 33 does not have a confirmed release date as of now.” Moreover, the show has currently gone on a break probably due to the holidays. However, we can expect a comeback from the show sometime in January 2022 after the holiday. So stay tuned to watch the new episode when it arrives.

The latest season of the highly popular DC animated series has once again attracted a lot of viewers. That is why the viewers are wondering about where to watch Teen Titans Go! Season 7? Well, that question has a simple answer to it. “Teen Titans Go! Season 7 airs at 7:30 pm ET in the United States on Cartoon Network.” Furthermore, the show mostly airs on Saturday but sometimes the network releases a new episode on a different day as well. Teen Titans Go! is available to watch on Amazon Prime Video. Meanwhile, the viewers can stream the first 5 seasons on Netflix and Hulu.