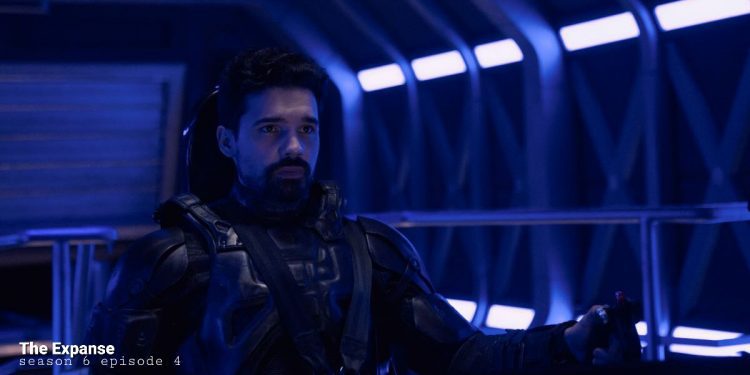 Holden in "The Expanse" season 6

“The Expanse” Season 6 Episode 4 drops this Friday with the inevitable war approaching its grand climax. However, the synopsis suggests we may see more of a build-up to the inevitable in the next episode. The Avasarala-led Fleet is in a precarious situation. They have to contend with a humanitarian crisis that looms over Ceres while they gear up for a war. Marco has fled the station, and in the last episode, the Rocinante’s grab as well. Holden_s decision to not destroy his ships may incur a colossal loss of lives. Making the situation worse is the tease we get in the last episode’s ending. Marco has received word about testing at the Rings. It seems that this relates to his ace card in his war against the inners.

Meanwhile, Drummer and Walker have been trying to find Marco’s secret supply depots. So far, their search hasn’t yielded results. However, it seems they’re in for a big reveal when they eventually uncover what lies at the mysterious depots. The story has reached its final leg, and each episode ends with the hype for the finale getting ever-so-bigger. Let’s now delve into all that episode 4 of “The Expanse” season 6 will entail. Spoilers ahead!

Episode 3 opens with the same Laconian girl we’ve been seeing this entire season. Every episode opens with the girl and her story about her bird and her family at the periphery. Aside from a storyline concerning the girl’s bird friend and a strange dog-like creature, we’ve also been seeing some faint hints of a connection of this whole seemingly disjointed story to that of the main one. By the end of episode 3, we hear the Laconia being mentioned, hinting the place will likely play a significant role. Anyway, the girl is still not over her bird and goes to the same spot in the woods.

However, what she encounters next is a revelation that cheers her up. Her bird is now cured. What’s more, is that the drone she broke is also fixed now. The girl says to the creature that he “fixes things.” However, when she returns home, she witnesses a ghastly scene. Her family is crying over her brother, who has blood all over him and seems to be unconscious. Although not stated directly, it seems that her brother might be dead. This prologue story to each episode so far has raised many questions as to how it relates to the main plot. With three episodes left in the entire series, it wouldn’t be long before we learn of its significance and connection.

The Fleet Arrives at Ceres

The main story has accelerated into motion, and the Combined Fleet of Earth and Mars have reached Ceres. However, when they ask for the Ceres Station to surrender, they find that it’s empty. Marco has abandoned the station, and the Chief Administrator confirms it when she says they don’t know where Marco is. Avasarala realizes Marco has abandoned the station, and it’s not long before she also understands the possible reason behind it.

The Humanitarian Crisis at Ceres

They discover that the station is running incredibly thin on food and fuel supplies. The reason for Marco’s abandonment becomes clear. He left the station to be taken care of by the Fleet. He must also know that they won’t turn away from the people and will have to save them. Avasarala knows it. Even though helping them out would set them back since they’re amid a war, they have no other choice.

Meanwhile, aboard the Pella, Marco is actually in an upbeat mood. The approaching Fleet doesn’t seem to bother him in the slightest. However, Filip is worried, especially after seeing the news that the people are calling Free Navy cowards for abandoning the station. He goes to have a word with Marco, furious. However, Marco tells him Ceres is not their worry and that they have to fight amidst the darkness. Meanwhile, Drummer and Walker are still finding out where Marco’s supply depots are. Marco discovers that Rocinante is heading towards the Ceres Station. Finding it a great opportunity to wipe them off, Marco orders an attack. However, before they can catch them off guard, the Rocinante gets the update.

They ready themselves for a head-on as Marco’s ships ready to attack. Filip is at the helm of the weapons. He fires reluctantly and with a fair bit of hesitation. However, Rocinante defends itself, maneuvering expertly and eventually giving it back to the Free Navy ships. Bobbie inflicts a major blow to the enemy that disables their systems. Holden establishes a link and asks Marco to surrender.

Marco would rather die than surrender, though, and Holden wants him as a prisoner, not a martyr. Bobbie goes for a missile attack, but as it reaches the enemy ships, it turns out to be a dud. We learn that Holden rendered it obsolete himself. Tasting a bitter defeat, Marco’s ships flee. Marco takes his fury out on Filip, who actually gives it back. Filip tells Marco it’s him who failed. Marco orders him to get out.

The episode ends with an ominous sign towards something grave heading for the Fleet and Rocinante. Marco receives news about something being tested at the rings. He’s happy to hear the news, which is notable also because he just walked out of an utter defeat. This news may prove to be Marco’s biggest card against the Earthers and the Fleet.

“The Expanse” Season 6 Episode 4 will release on December 31, 2021. The official synopsis states that Holden will be facing flak from his crew following his major decision during the fight with Marco. The controversial decision lets Marco survive the fight and flee from the scene. We will be seeing the crew criticizing Holden’s decision that might prove to be one of the biggest mistakes with some incredibly grave repercussions.

Meanwhile, Avasarala will struggle to try to contain an escalating humanitarian crisis at Ceres. Marco abandoned the station in a decrepit state. They’ve run out of food and fuel, and the Fleet has no choice but to help them out. However, it’s a difficult thing for them to do while they’re in a war themselves. Elsewhere, Drummer’s growing faction will be staging a daring raid. They haven’t been able to locate Marco’s supply depots so far. Episode 4 may see them finally succeed. Meanwhile, Filip will make an unexpected discovery.

“The Expanse” Season 6 Episode 4 will premiere on Amazon Prime Video this Friday, at 12 a.m. PST. Season 6 of the acclaimed sci-fi series is available exclusively on the streamer. You can watch new episodes every week on Fridays at 7 p.m. ET in the US and Canada. The UK viewers can start streaming the show online on Prime Video when it becomes available at 12:00 a.m. The Australian viewers can catch the new episode at 5:30 a.m. Episode 4 will be the midseason premiere, with three more episodes left in the roster until the series comes to an end.