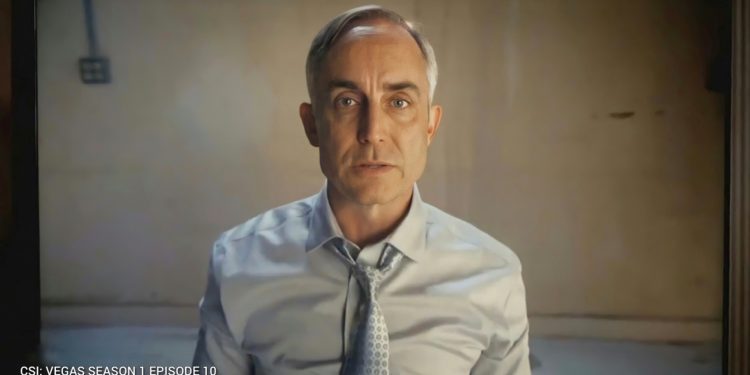 “CSI: Vegas” Season 1 Episode 10 will mark the conclusion of the limited series. There hasn’t been any word regarding the continuation of the series beyond the first season. Until any new development surfaces, Episode 10 should be the culminating entry in the sequel to the original CSI: Vegas series. The final episode is set to contend with the trial of Hodges that has now turned deadly for the CSI lab technician.

“CSI: Vegas” Season 1 Episode 10 is set to release on December 8, 2021. The episode will pick up the story right where it left off at the end of episode 9. Hodges has gone missing and we have a pretty good idea why that has happened. It’s a kidnapping and Wix is most probably the person behind it. Before he went missing, the judge and others saw the video confession Hodges left in his wake.

However, it soon became apparent that the confession was not genuine at all. He was coerced and later when Grissom and others rush to find him, they discovered some harrowing clues about what his fate might await. The upcoming episode will see the team continue their search for Hodges and clear his name, which is necessary for both his and the whole crime lab’s reputation.

CSI: Vegas Season 1 Episode 10 will air on CBS on December 8, at 10:00 pm ET. New episodes air on the network every week on Wednesdays. You can also watch CSI: Vegas Season 1 online on CBS’s official website. Furthermore, you can access CBS online via live TV services like Fubo TV. There are video-on-demand alternatives to stream CSI: Vegas Season 1 finale as well. You can rent or purchase episodes of the TV show via Amazon Instant Video and VUDU.

Episode 9 follows two cases, one involving a gruesome murder of a couple, and the other regarding the Hodges trial. The trial has kicked off and the situation looks grimmer and grimmer for Hodges as it proceeds. As the prosecution lambasts Hodges while presenting their case, he notices that the jury already hates him. Meanwhile, Wix remains smug as always. There is a lot at stake in this trial.

It’s not just Hodges’s fate or Wix’s devious and efficient plan to get the big payout. There’s also the fact that the result of the trial could give all the criminals Hodges’s investigation sent to prison a pass to press charges themselves and get out. Plus, the lawsuits that will be filed will bankrupt the state. Despite his innocence, the jury seems too convinced that Hodges is guilty. However, Sara, Max, and Grissom are trying to get Hodges out of this mess.

Meanwhile, the CSI lab is also on a case involving a murder of a couple. The couple in question was a part of an extreme modification sideshow. The man had modified his skull, adding two devilish horns, while the woman had angel wings surgically attached to her. The couple dies by burning inside a pit. However, it soon becomes clear that the case entails more. The lab investigations reveal that the woman had no soot in her lungs. This means that she died before the fire burned her body. The team can’t find much regarding what exactly killed her.

Due to extreme burns, it’s very difficult to properly nail down the cause. However, they do eventually find out that a sharp object that her husband used to own. This further complicates the case since it’s inexplicable why the husband would kill himself as well. He died in the fire as well and he was alive before he fell inside the pit. What’s more, is that his hands were tied and it seemed that he tried to shield his wife. The team tries to investigate further and question the couple’s son regarding the sharp object. However, the son claims he doesn’t have it. This case comes to a halt as the bigger case regarding Hodges takes the center focus.

Hodges is facing one problem after the other. The new development in his trial involves the attorney general of the state and the prosecution pushing him to take a plea. They tell him he should take a plea. This would, they claim, not only keep the criminals Hodges sent to prison within the prison but also help the state from going bankrupt by all the lawsuits that will ensue. The attorney tells him to confess to tampering with six cases.

For that, he will get 12 years in prison, and that too on good behavior. Hodges doesn’t know what to do and asks for some time to think. He mulls over the plea deal and considers taking it. He also talks about it with Gil and others. However, they don’t want him to take it. Meanwhile, Wix learns that the team has contacted Guillermo, his accomplice, to testify against him.

The team is also hanging on to Guillermo as their last straw against Wix. However, it turns out that they can’t hold on to that anymore when Guillermo is found dead, with his tongue cut out. The team can’t find any clues or traces of the perpetrator as well, A clean and professional murder. Meanwhile, Hodges has gone missing. In his wake, he has left a video message and sent it to the judge. The video message is a confession to his “crimes”. The judge along with Grissom and others watches it. However, Grissom notices that something is off about the video.

It is apparent that the video confession is a result of coercion. They try to find out where he is but he’s not even returning calls. He’s definitely in a dire situation. Grissom enlists help from a video expert and he manages to find the video’s time and place of origin. After finding the location, they rush to find Hodges. However, the abandoned building is empty. They do find the empty chair Hodges was sitting on in the video confession. They also find some pliers, hinting towards something really grim.